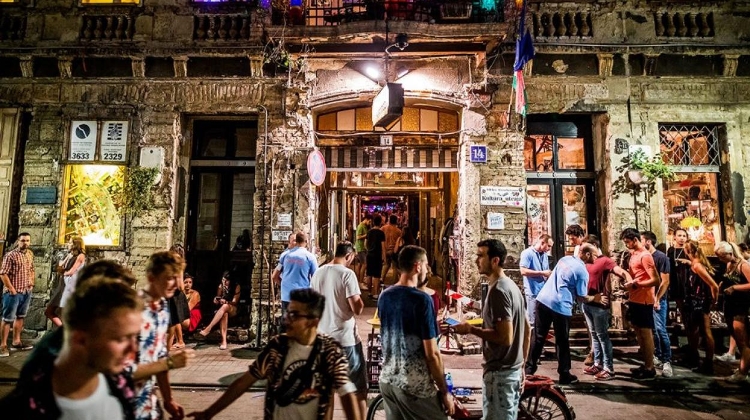 District 7 is still ruin bar central, and since the best are close together in downtown Pest, this handy guide is all you need to sample each main pitstop during one epic night out.

Even if you’re not up for a full ruin pub crawl, this insightful article by WeLoveBudapest introduces several venues you might not know about yet which are worth checking out. 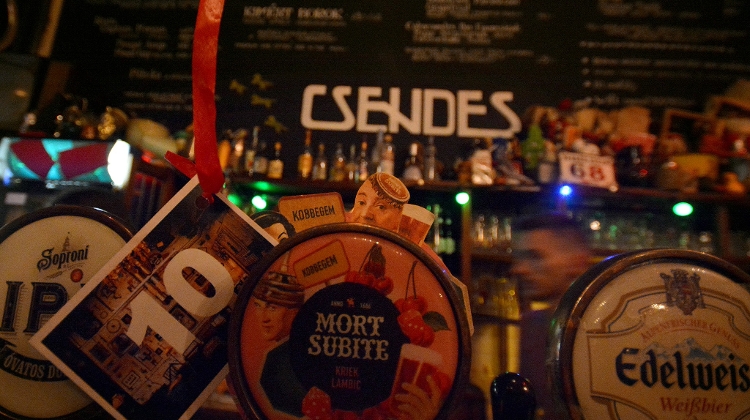 Stepping into this laid-back locale feels quite surreal, the mannequins, the old toys and the vintage knickknacks spread out around the place, the century-old chandeliers and retro lampshades.

An inscription etched into the glass overlooking Ferenczy István utca, a cosy side street near Astoria, is the lovely detail that this was once the Fiume Kávéház, a leading literary café dating back to 1883, when Rijeka, Fiume to Hungarians, served as the main port for Budapest.

Despite today's bohemian atmosphere – Csendes sits by the student quarter, and the party zone is ten minutes away – you can still find a table by the window and imagine the scene back then.

By day, Csendes is more a café that transforms into a civilised bar after dark, when the Krušovice flows with more abandon. This still overshadows rival venues thanks to its characteristic individuality, which makes it worth a visit.

In summer, check out the adjoining Csendes Társ serving as a lovely old-timey terrace by the wonderful inner-city green oasis of Károlyi-kert. 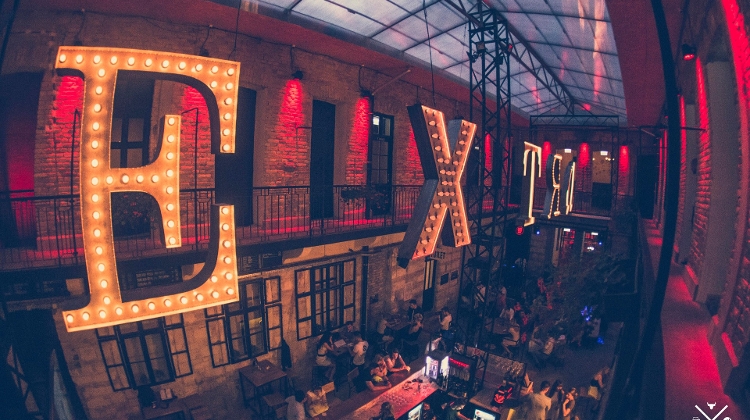 Before things get too sloppy around the Party Quarter, you should visit EXTRA – one of the later ruin bars in the family, and while it is a little more upscale than most of the other establishments nearby, this chic community space is worth stopping by to sip Czech or Belgian beer at the long copper island bar beneath luminous scarlet umbrellas.

You can even order a classic bistro dish to save you starving later on, with inevitably messy consequences.

EXTRA is a comfortable, sensible stopover on any bar crawl, an ideal halfway point, maybe, where new-found friends can perhaps get to know each other a little better rather than blend in with a big group of shouty people. 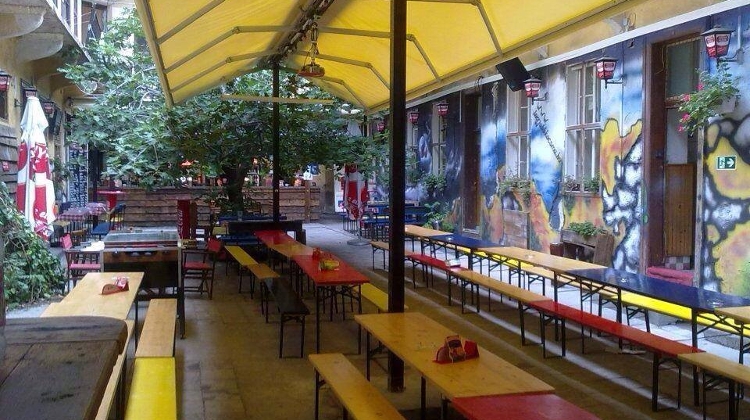 Like its neighbour UdvarROM Füge Udvar ('Fig Garden') is one of the most fuss- and frill-free places of all. Stepping inside, you find yourself in the courtyard of a crumbling building, where wooden benches have been placed haphazardly and drinks are served for cheap.

Locals often fill the roofed and outdoor areas, fine examples of a ruin bar at its unpretentious best, providing a fun and affordable night out with mates.

If you like playing pub sports, there's a side area with all kinds of games, pinball, arcade games, ping pong and table football. For voyeurs, the TVs over the main bar show match action and music videos. 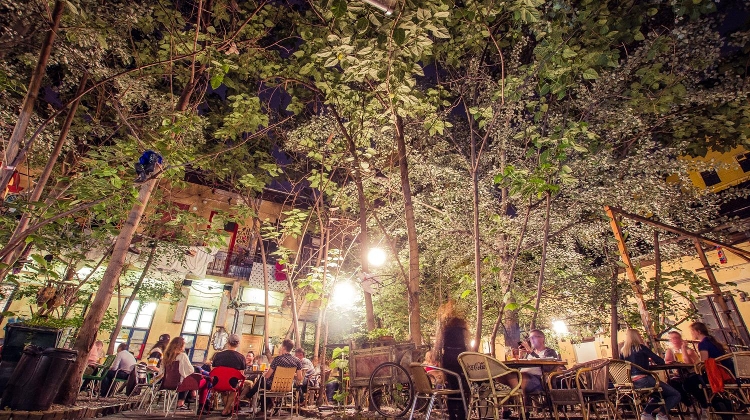 A party spot in a popular hostel, the Grandio is also a sprawling courtyard bar in its own right, where local barhoppers and international backpackers mingle until early hours.

The first thing you find as you enter the large doorway in Nagy Diófa utca is the large main bar, its many windows looking out onto a jungle of plant life and brightly coloured furniture.

Of course, if you have one last drink after the last one you said was going to be the last one, you can stay the night. Madcap antics duly encouraged, here in this playground for party animals, you can unleash your inner rock star. 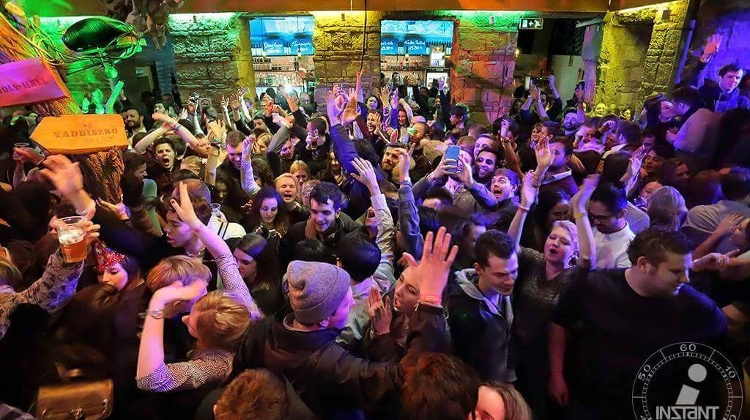 The huge eyes of a neon night owl beckon you along Akácfa utca and, sure enough, this is the main party complex in the Budapest's nightlife zone.

You wouldn't know it as you walked in, right opposite the side entrance to Klauzál tér market, but here you'll find at least five separate venues, the main ones being the ones featured in the double-barrelled name when the Füge Udvar fused with former District VI nightspot, Instant.

That was five years ago, which the Instant-Fogas happens to be celebrating this weekend, 10-14 March. A pioneering ruin pub that helped created a new nightlife genre during its initial years, Fogas Ház functioned as a hub for arts and a gathering place for contemporary visionaries.

The interior remains stylishly dilapidated and very much lived-in. Separated by the Balloon Room (but of course!), the Instant also brings its party game to the table, with dance floors aplenty.

Leading out from these main hubs, in various directions, are the Budapest Room & Bar, Robot live venue, DJ spot Lärm, the Liebling terrace for wine buffs and probably one or two others indicated on the Cluedo-like map in the corridor as you walk in. It's all a whole mess of fun and in full swing until 6 am. 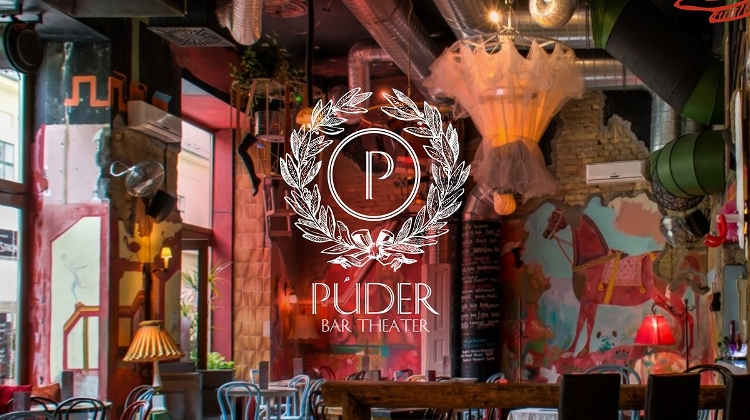 A ruin bar along restaurant-lined Ráday utca might seem a bit more upscale, yet it is an intriguing hangout and a hotspot for regular cultural events – such as the wine dinner with stand-up comedy on 21 March.

The interior is real eye candy, colourful murals depicting the fairy tales that backdrop all kinds of installations by local artists, including an incongruous lizard creature hanging over the main room.

A nice selection of wines – Pátzay and Bujdosó the affordable house varieties – indicates that you're not here to sink cheap drinks and collapse, and you'll find Edelweiss and Krušovice among the draught beer options.

A nice terrace catches the sun at lunchtimes, when a decent kitchen does good trade. Púder is a quieter hangout that its Party Quarter counterparts, but stays open until 2am at weekends, 1am during the week, a convivial option if you're tired of loud foreigners. 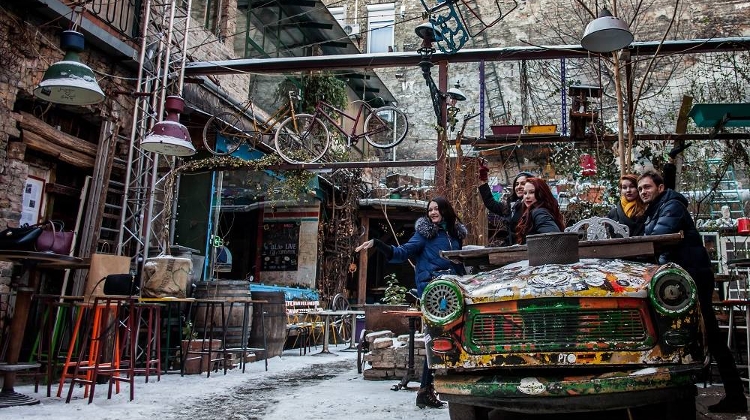 On Kazinczy utca sits the daddy of all ruin pubs, one that not only spawned the entire ruin-bar phenomenon but also an interesting array of initiatives attached to the mothership.

These days, you'll find a design store alongside and, within, a popular Sunday morning produce market with a live band set up, to name but two.

For all that, the good ole Szimpla Kert still sports its original sign outside, indicating that it's a Kertmozi, an outdoor cinema, as it once screened films on one of its back walls. One of the most famous party places in Europe, included in countless guidebooks, the Szimpla usually attracts a mainly foreign crowd, although locals still gather for the diverse selection of concerts, invariably free.

Upstairs and down, there are plenty of nooks and crannies to find an intimate space, with a wine bar operating on the ground floor, to the left as you walk in. If necking pints is the way to go, the main bar is immediately to the right from the main entrance. 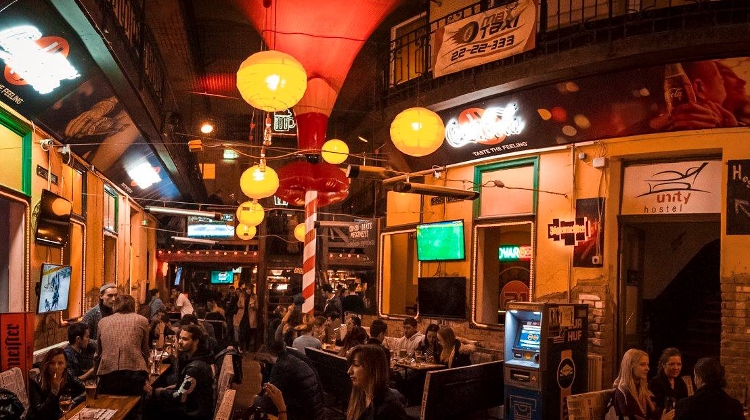 Udvarrom is a no-frills ruin pub similar to Füge Udvar a few metres away on Klauzál utca, its name announced in red-and-green neon as you turn the corner from Wesselényi utca.

Drinks prices are nice and low, regulars gathered in the covered and open-air areas of the complex.

DJs spin at weekends, with a busier agenda taking shape as the party quarter emerges from the pandemic.

Republished with permission of WeLoveBudapest.com

Photos courtesy of the venues.