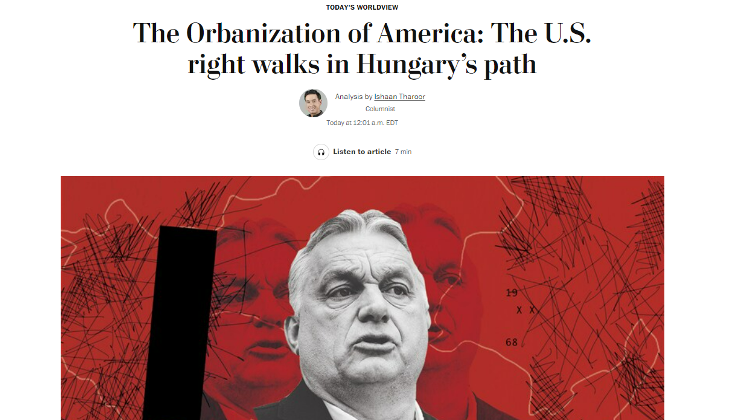 The Washington Post is devoting a three-part article to the impact of Prime Minister Viktor Orbán on US politics.

In the first part, published yesterday, the newspaper recalls how Orbán declared war in 2018 against the “1968 elite” and through it the liberal European status quo.

The author adds that Orbán had been brewing the recipe for illiberal democracy in Hungary since 2010, but 2018 was when the time had come for him to start exporting his model.

According to the Washington Post, Orbán and Fidesz have become a source of inspiration for American conservatives such as Steve Bannon and Tucker Carlson.

The author points out that Orbán has promoted the “great replacement” theory - the notion that immigrants are part of a political project to undermine or even wipe out native-born populations - espoused by Carlson and the perpetrator of the massacre in Buffalo on Saturday, as well as three in ten Americans.

According to the Washington Post, Hungary offers US right-wingers “a glimpse of culture war victory and a template for action”.

It then quotes J.D. Vance, the Republican Party’s nominee for this year’s Ohio Senate election, as advocating the seizure of the assets of the Ford Foundation, an organisation that promotes social justice, and calling for a takeover of universities by the right wing.