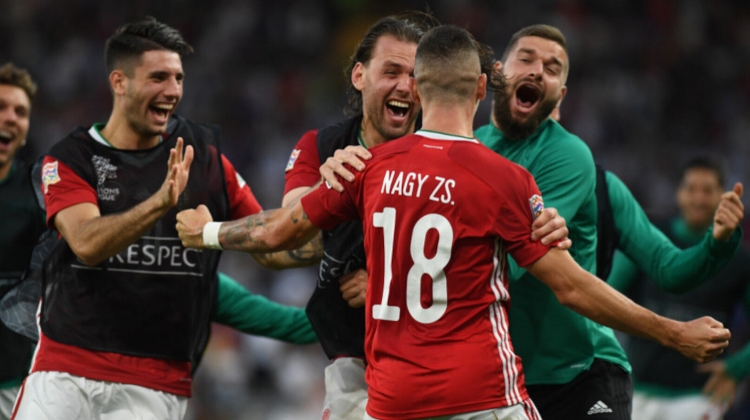 A scarcely believable result began to take shape in the 16th minute when Ádám Lang nodded down a deep cross and Sallai crashed a volley high inside England goalkeeper Aaron Ramsdale's right post to hand the visitors an early lead.

Hungary dealt well with everything England threw at them for the next 54 minutes, their most dangerous moment coming nine minutes before half-time when goalkeeper Dénes Dibusz had to make an outstanding save from his own player Willi Orbán's inadvertent header at goal.

Sallai then doubled his team's advantage via a swift counter-attack, substitute Martin Ádám slipping the ball through to the Freiburg forward surging into England penalty are, who finished expertly first-time under Ramsdale with his right foot.

This was already the stuff of dreams for Marco Rossi's side, but incredibly there was more, much more to come. Firstly, after England's Harry Kane had hit the crossbar with a looping header, Ádám was first to fellow replacement Loic Nego's deflected downward header and when he set up Zsolt Nagy for a shot...

That Puskás Akadémia wingback unleashed a low, rasping drive which arrowed past Ramsdale and into the very left side of the England goal.

Ádám Nagy releasing Dániel Gazdag with a sweet through pass which the latter pounced upon before dinking the ball left-footed past a befuddled Ramsdale and into the right corner of the England net.

That sealed a sensational 4-0 victory for Hungary, who inflicted England's worst home defeat in 94 years upon them, eclipsing even the famous Magical Magyars' 6-3 success in 1953 in terms of margin of victory. Indeed, that achievement by Ferenc Puskás' Golden Team was Hungary's only win away in England ever. Until now.

More good news soon arrived with the headline that Germany had defeated Italy 5-2 in the group's other game, meaning that Hungary will look forward to September's final two group-stage fixtures knowing that they top the group on seven points from four matches:

One point ahead of Germany whom they face away on 23rd September and a further point clear of third-placed Italy, against whom they close this Nations League top-tier campaign on 26th September.