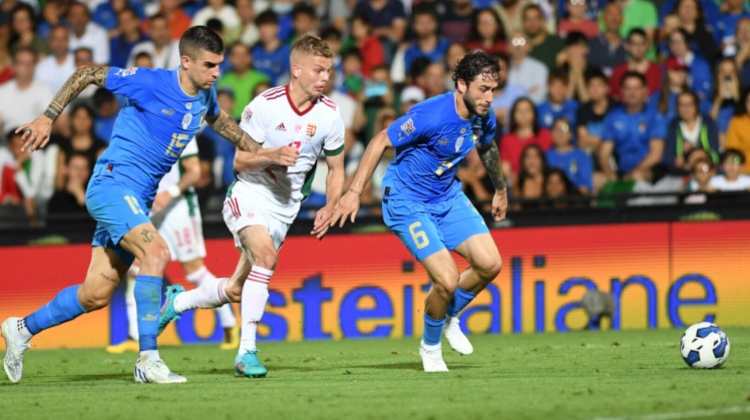 Two first-half goals were enough to secure Italy a 2-1 victory against Hungary in Cesena on Tuesday evening, but Marco Rossi's visitors battled hard and even had chances to equalise after an own goal got them back into the game with half an hour of the match remaining.

Hungary head coach Marco Rossi had opted against any outfield changes from the group which performed so impressively in the 1-0 victory against England last Saturday, his only alteration coming in the form of Dénes Dibusz who replaced Péter Gulácsi in goal.

Italy defender Gianluca Mancini was the first to get an effort on target, his second-minute header from a corner safely gathered by Dibusz.

The 13th minute brought Hungary's first sight of goal, Szoboszlai's 20-metre free-kick looking certain to threaten Italy goalkeeper Gianluigi Donnarumma's goal until a defender in the wall blocked the shot with his arm, VAR deeming the contact not to be worthy of any further action.

The two teams continued to trade goalscoring opportunities, Dibusz saving athletically from Mancini's far-post header back across goal following a left-wing corner in the 22nd minute before Sallai stung the palms of Donnarumma with a vicious, low drive from the right side of the Italy penalty area three minutes later. The hosts were first to convert a chance though, a fabulous, long, diagonal pass on the half-hour mark finding Leonardo Spinazzola in space on the left corner of the Hungary penalty area and his pass inside was controlled and drilled right-footed into the top-left corner of the visitors' net by Nicolo Barella from just outside the box.

Dibusz, Ádám Lang and Loic Nego all then made crucial, clearing interventions by foot as Italy turned the screw but there was nothing anyone could do to stop Lorenzo Pellegrini slotting Matteo Politano's cutback from the right byline low into the centre of the goal with Dibusz stranded near his left post, that strike doubling Italy's lead just before half-time.

To their credit, Hungary continued to trouble Italy's defence in the second half, Sallai volleying straight at Donnarumma when well placed on 48 minutes before the away team got what their endeavours surely deserved, the luckless Mancini diverting substitute Attila Fiola's firm low cross from the right just inside Donnarumma's left post to halve the deficit after 61 minutes.

Italy continued to dominate possession but Hungary also remained capable of applying pressure on the hosts' goal, and they could easily have levelled the scores on at least two occasions.

Willi Orbán's 69th-minute half-volley straight at Donnarumma from a central position 15 metres out would have been almost unsaveable if directed either side of the Italy goalkeeper, while Sallai's rasping drive was tipped over by the home team's captain.

No equaliser was to be forthcoming though, and thus Italy took the three points which propels them to the top of Nations League Group A3, one point ahead of Hungary in 2nd place. Germany lie third on two points and England prop up the group on one point after the two drew 1-1 in Munich, also on Tuesday evening.