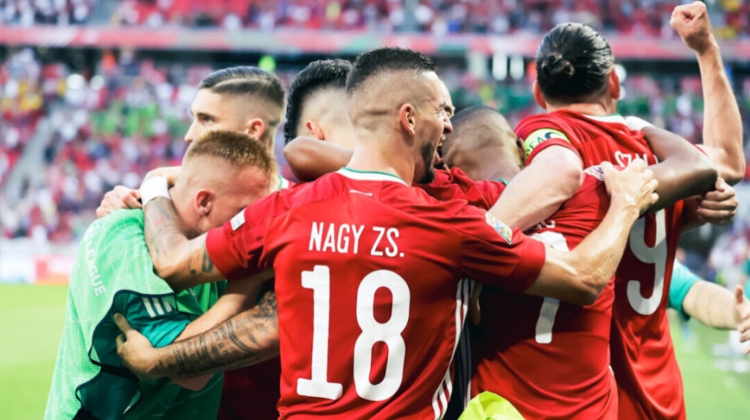 A second-half penalty in the Puskás Aréna propelled an outstanding Hungary team to their first victory over England for 6 decades, as Marco Rossi's team took all three points in their first of four Nations League fixtures this month.

The win was no more than Hungary deserved as they pressed and harried England out of any rhythm and counter-attacked with pace and efficiency time and again.

The crucial moment came in the 66th minute when Reece James was adjudged to have fouled Zsolt Nagy in the England penalty area and Szoboszlai stepped up to strike an excellent penalty into the bottom left corner of the England net.

Rossi's side lined up in familiar style, Péter Gulácsi in goal behind a back three of Willi Orbán flanked by Attila Szalai to his left and Ádám Lang to his right. Zsolt Nagy and Loic Nego filled the left- and right-wing back positions while a central midfield three of András Schäfer, Ádám Nagy and Dominik Szoboszlai were ready to support the striking duo of Ádám Szalai and Roland Sallai whenever they could.

From the outset it was clear that Hungary were intent on taking the game to their more illustrious visitors, constant pressure and a rapid counter-attacking strategy forming the basis for an impressive opening half.

One of two England debutants, Jarrod Bowen, sliced Trent Alexander-Arnold's cross into the pitch to give Gulácsi a routine save in the 11th minute before the chance of the half presented itself to Szoboszlai two minutes later, Nego's first-time, right-wing, crossfield pass after Ádám Nagy had spread the ball wide finding the RB Leipzig playmaker surging into the England penalty area.

He reached it just before Pickford and slid the ball under the Everton keeper's body but a less than perfect connection meant that the covering Connor Coady could clear confidently and stop the ball rolling into an empty net.

The Wolverhampton Wanderers defender then headed Alexander-Arnold's corner narrowly over the bar in the 18th minute as England started to use their dominance of possession in a more threatening manner, but they couldn't sustain that danger, and instead, Hungary began to pick them off on the counter-attack.

Just before the half-hour mark, Szoboszlai found a defence-splitting pass to Zsolt Nagy who stretched to control and then shot viciously from the left channel just outside the penalty area, Pickford doing well to make a sprawling save to his left and only concede a corner.

Minutes later, Hungary captain Ádám Szalai displayed fabulous vision to turn in the centre circle and attempt to lob Pickford from more than 40 metres, but his incredible effort sailed barely a metre wide of the right post.

England simply couldn't match Hungary's workrate and directness and nearly fell behind when Ádám Szalai spread the ball to wide to Nego whose cross finds Szoboszlai at the far, left post, but he could only dig the ball into the turf in front of him, which allowed Pickford to gather easily.

The game remained goalless during the rest of the first half and into the second period too, the pattern of the game barely changing at all.

Hungary's soaking up of pressure and ability to surge forward when regaining possession saw further chances created, Zsolt Nagy half-volleying the ball from the left edge of the box just a metre wide of Pickford's left post in the 49th minute.

Gareth Southgate made three changes on the hour mark to try to reinvigorate his England team but one of them, right-back Reece James, contrived to commit a risky challenge inside his own penalty area, which was deemed to be a foul on Zsolt Nagy by Portuguese referee Artur Dias.

Szoboszlai kept his cool to slam the ball low and hard into the left corner of the England goal to give the home team a sensational and deserved lead.

Last year's European Championship finalists looked bereft of ideas as to how to get back on level terms, setpieces proving to be almost their only real threat, sich as when Coady headed James' right-wing free-kick centrimetres wide of the far right post.

Gulácsi also saved well from another substitute Bukayo Saka from a tight angle, but Hungary could also easily have doubled their advantage, no more so than in the 82nd minute when substitute László Kleinheisler slalomed into the right of the penalty and forced Pickford into another sprawling save, Schäfer then blazing the rebound over the crossbar a matter of metres from goal.

That miss didn't matter though, Hungary preserving their lead with relative easy in the final minutes to secure a famous win over England, their first in 16 attempts going back to the 1962 World Cup.