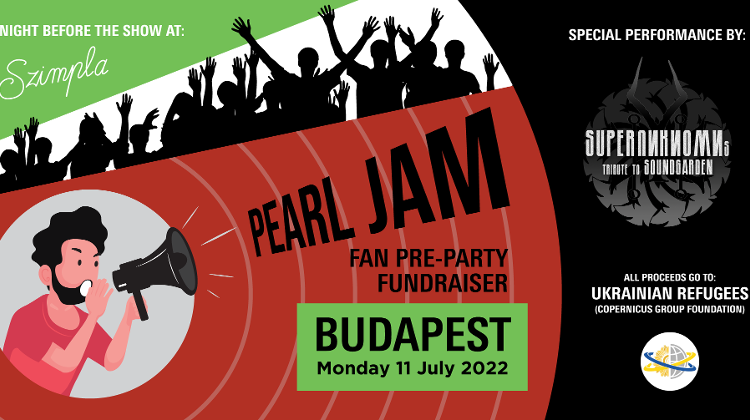 In July, Pearl Jam will be coming back to Budapest for the first time since 1996. This will be a big moment not only for Hungarian but also for international Pearl Jam fans who want to visit Budapest.

To celebrate, there will be a meetup at Szimpla Kert on July 11 from 6pm for people to connect with other fans, share a laugh, and raise some funds for Ukraine.

Pearl Jam has one of the largest and most loyal fan bases of any band in the world and there will be thousands of people traveling to Budapest for the show.

The fans also take a lead from the band's philanthropic ways by holding similar fundraiser pre-parties before every show in North America. It has not been as common on European tours, so this will be special.

"This is a great opportunity to do good with so many like-minded people gathered in one space," explains Jason Leung, event organizer and Pearl Jam fan living in Budapest. "These pre-parties are a lot of fun and I look forward to them almost as much as the concerts."

The event will be a fundraiser benefiting an organization called Copernicus Group Foundation, unpaid volunteers from Łódź, Poland, who evacuate and assist war refugees from Ukraine.

Some of the founding members are Pearl Jam fans from Poland, hence, the connection with this event. They will also be holding a similar fundraiser event before the Pearl Jam show in Krakow 2 days later at Grill Bar Posterunek on July 13.

They have a GoFundMe page setup for one of their missions as well for people who want to donate but won't be in Budapest or Krakow.

For entertainment, there will be a special performance from the Superunknowns, a local Soundgarden tribute band, who are donating their efforts to turn up the volume.

"I'm so excited to play this event and unite Hungarian and international Pearl Jam fans," says Marton Szekely, singer for Superunknowns and Tulpa.

Hungarians have been campaigning for a long time to have Pearl Jam return for a concert. The dream is almost a reality and they can now celebrate.