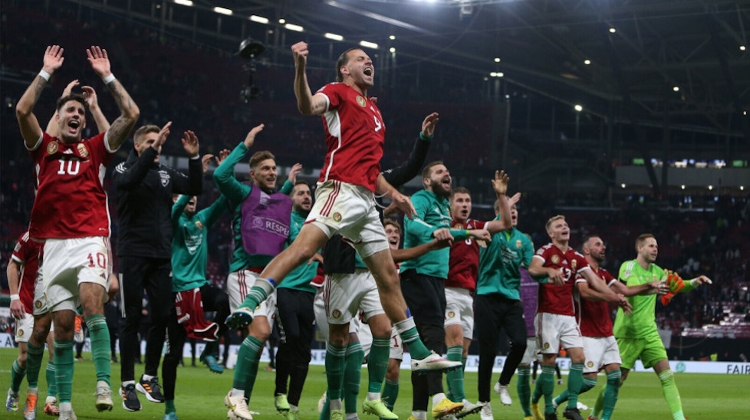 Yet another inventive and courageous performance from Marco Rossi's Hungary men resulted in a 1-0 victory against Germany in Leipzig on Friday evening, Ádám Szalai's spectacular first-half goal proving enough to keep his side one point clear top of the Nations League Division 1 group with just a home fixture against Italy to come on Monday.

It was a largely familiar lineup that head coach Marco Rossi selected for this penultimate group-stage match in front of nearly 40,000 spectators in Germany, Péter Gulácsi in goal behind a back three of Ádám Lang, Willi Orbán and Attila Szalai with Attila Fiola at right wing-back and 18 year-old debutant Milos Kerkez on the left.

First blood was drawn by the visitors when Szalai artfully used his right heel to flick Szoboszlai's outswinging corner from the left into the far-right side of the German goal in the 17th minute.

Gazdag and Germany's Thomas Műller both saw efforts saved before the half-time whistle was blown. The second half was predictably characterised by German pressure, Müller seeing a goal disallowed and Timo Werner and Joshua Kimmich both being denied by Gulácsi.

There were to be no further changes to the scoreline though and thus Gulácsi, Orbán and Szoboszlai were able to celebrate a momentous victory in the stadium they play their club football in for RB Leipzig.

The joy on every Hungarian face at the end was not only due this latest amazing triumph under Rossi, Hungary's first in a competitive match against Gerany since 1954, but also because Italy's win over England in Milan at the same time means that Hungary have secured their place in the top tier of the tournament's next edition and can even finish top of this group if they avoid defeat against Italy in the Puskás Aréna on Monday.