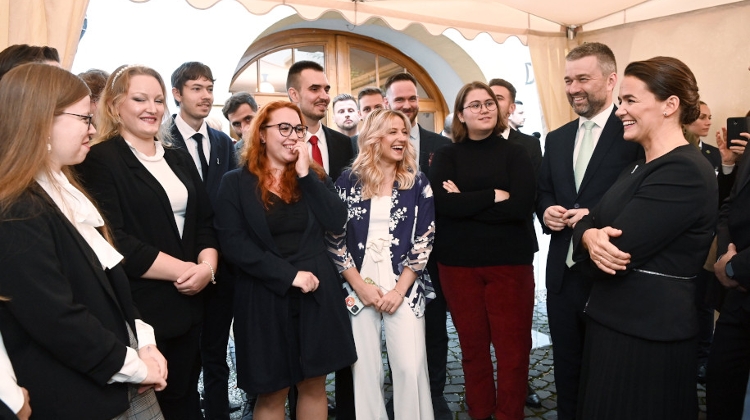 Types of EU economic sanctions are needed that would cause serious economic strife for the Russian aggressor, not the European economy, President Katalin Novák said on Friday in Bratislava after meeting Slovak counterpart Zuzana Čaputová.

“We condemn Russian aggression and its attack on Ukraine and support Ukraine’s territorial integrity and sovereignty,” she said.

Referring to exemptions from the oil embargo, the president said both Slovakia and Hungary had benefitted from “good compromises” in respect of sanctions against Russia. But an assessment of the impact of current and planned sanctions is needed, Novák added.

The president said she would propose at their meeting later on Friday that Slovak Prime Minister Eduard Heger also support sanctions packages that cause serious economic difficulties for the Russian aggressor rather than the European economy.

As regards the issue of military support to Ukraine, Novák noted a difference in the positions of Slovakia and Hungary, adding however that both countries had taken in a large number of Ukrainian refugees.

“Creating peace is in the interest and a primary aim of both of our countries, whereas the prospect of achieving that is not that positive,” she said.

Concerning illegal migration, Novák called it a mutual interest to avoid the reinstatement of national border controls among countries of the Schengen zone as well as to strengthen Schengen’s external borders.

She also addressed the issue of minorities, noting that Slovakia’s recent census shows around half a million Hungarians living there.

The possibility of exercising their rights is of primary importance for Hungary, she said, adding that she had asked her Slovak counterpart to do all she could to ensure that the Hungarian community could nurture their national identity.

Novák said Hungary’s 35,000-member Slovak minority has a parliamentary representative, adding that the number of Slovak schools had increased threefold and several Slovak cultural institutions had been established.

Novák highlighted the importance of cooperation in the Visegrad Group comprising Slovakia, Hungary, Czechia and Poland.

The V4 “has no alternative, it is a platform for us to represent our common interests most effectively within the EU”, she said, and asked for her Slovak counterpart’s support in connection with the EU’s allocation of the funds to Hungary which the country is entitled to.

Concerning economic ties, Novák noted that Slovakia is Hungary’s second biggest economic partner. She noted in addition that the number of border crossing stations between the two countries continues to grow with 41 operating by the end of 2023.

Speaking about culture, Novák noted that Slovakia is the guest of honour at this year’s International Book Festival that opened in Budapest on Thursday.