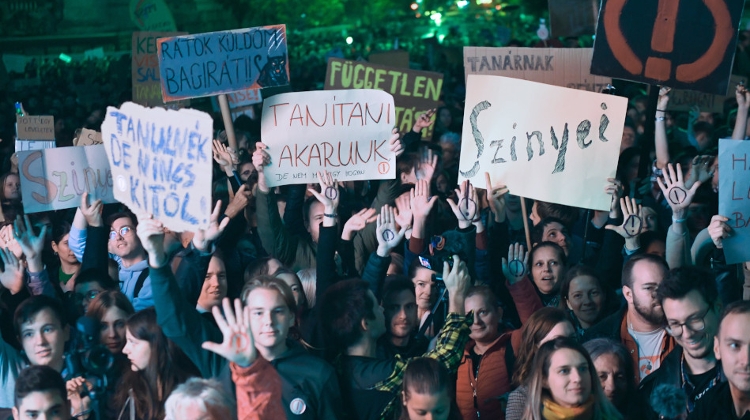 Protesting students blocked central Budapest’s Margaret Bridge from traffic on Wednesday afternoon. The demonstrators expressed support for striking teachers and a speaker called on participants to “recapture the hope and future together”.

Participants chanted the slogan “no future without teachers” and held up a sign “We stand by our teachers”.

Others held up the national colours, Szekler and Roma flags, as well as the flag of teachers’ trade union PDSZ. “Who is going to teach tomorrow?” the protesters wrote on a poster placed on the railing. The demonstrators occupied Jászai Mari Square and the eastern half of the bridge.

The opposition Democratic Coalition (DK) said on Wednesday that teachers who had been “unlawfully fired” must be given their jobs back.

Referring to nationwide protests, party spokesman Balázs Barkóczi called it “marvellous that thousands of teachers and students protest against the general state of public education and humiliating wages”. He told an online press conference that it was an “important lesson to the Orbán regime” that protest and strike could not be banned, and “free people cannot be intimidated or silenced”.

Barkóczi, who holds the position of education and culture minister in the party’s shadow cabinet, said it was time that the government admitted it had “lost” against teachers and “lost control of the country”. He called on the government to start talks with teachers’ unions.

Several trade unions voiced their solidarity with a strike organised by teachers’ union PDSZ across the country on Wednesday. Speaking in front of a Budapest primary school, Erzsébet Boross, the head of public servants’ union MKKSZ, expressed her union’s support for a demand for a 20% pay rise offsetting inflation to be paid retroactively from July 1.

She voiced opposition to changes to occupational health and safety rules as well as the rule requiring state institutions to limit their heating to 18°C.

Boross said the union demanded a right to strike that ensured fair wages and talks where the sides were considered equals. “We’ve had enough of public servants being condescended to and the fact that there are no consultations about working and living conditions or wage talks,” Boross said.

She added that MKKSZ expected the government to treat public servants “as people … not as those on whom it can save money”.

László Nagy, head of the strike committee at Budapest’s Kölcsey Ferenc Secondary School, said that although he was one of the 45 teachers at the school who were participating in today’s strike, he was still required by law to teach four of his six classes.

“This is not a strike. It’s impossible to stage a strike like this,” he said. “A strike can’t be sustained if it can’t be seen.”

PDSZ national board head Anna Komjáthy said that some 13,000-14,000 teachers from more than 200 schools had been projected to take part in Wednesday’s strike. She said PDSZ has called another strike for Oct. 14, noting that it was on this day a year ago when PDSZ presented its demands jointly with fellow teacher union PSZ.

The problem of teachers earning meagre salaries “could be seen from the Moon”, while the government “has no intention to settle their problems”, Dúró said, adding that suggestions from government circles that teachers’ salaries could be raised in 4-5 years’ time were “quite appallingly cynical”.

The government’s argument that a pay hike in education is not possible without European Union funds is “unacceptable”, she said, noting that the government had been waging a “high-sounding war of independence” against the EU for years.

“The government has admitted that if it were for them, teachers’ finances will not improve,” Dúró said. She suggested that soon there would be no teachers for certain subjects, adding that in some schools “cleaners earn higher wages than teachers”.

Dúró also demanded that “no teacher should lose their job because they dare to speak up about their difficult situation”.

Demo Held at Budapest Parliament in Solidarity With Teachers