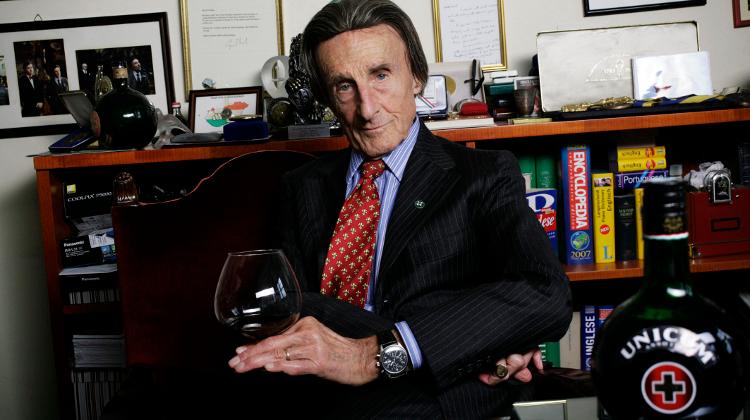 RIP: Peter Zwack was born in Budapest, where he finished high school, before being forced to flee the country in 1948. He subsequently continued with his studies in Milan and then in New York at the faculty of economics.

Until 1970 he lived in the U.S., becoming an American citizen. In 1970 he returned to Europe and lived in Florence, where he managed the production and international distribution of Zwack Unicum. He also launched a line of fruit liqueurs.

In 1987 he returned to Hungary for good. In 1989 with his partner Emil Underberg he formed a Joint Venture with the Budapest Liqueur Industry Company. In 1990 he was consequently appointed the first democratic Ambassador of the Republic of Hungary to the U.S.A since the fall of the Berlin Wall. In doing so, Peter Zwack had to give up his American citizenship becoming a Hungarian citizen once again.

From his first marriage Peter Zwack has five children, living in the United States.

In 1991, he returned to Hungary and, as the Peter Zwack and Consorten AG, won the privatization tender to purchase the Budapest Liqueur Industry Company, thus becoming the largest liqueur and spirit manufacturer and distributor in Hungary. He was the President of the Board of Directors of the Company from 1992-2008. when he handed over the helm of the Company to the next generation at the AGM of June 26, 2008. His son, Sandor Zwack, became Chairman of the Board and his daughter, Izabella, Member of the Board of Directors. Peter Zwack had been planning this step for some time to ensure that continuity and the family tradition be carried on into the sixth generation.

Peter Zwack was a Member of the Parliament between 1994-1998, he was elected in 1994 as the only independent MP to the Hungarian parliament for the town of Kecskemet.

In 1999 he became Cavaliere dell’Ordine di Merito della Repubblica Italiana.
In 2005 he received the Governor’s Cross of the Republic of Hungary (Civil).
In 2008 he became Honorary Citizen of Budapest.
In 2009 he was given the “Best of Budapest” Lifetime Achievement Award.


1. Where did you grow up?
In Budapest

2. What Hungarian traditions bring back fond memories of your childhood?
Christmas, the Sikló up to the Castle hill and Ruszwurm

3. What would you miss most if you moved away from Hungary?
The Gellért Bath

4. Friends are in Budapest for a weekend - what must they absolutely see and do?
Go to the Gellért bath, the view from the Gellért Hill, shopping in Nagycsarnok

5. What is your favourite Hungarian food?
Paprika – I carry a silver box with me everywhere and put it on everything

6. What is never missing from your kitchen?
Eggs, cheese, olive oil from our garden in Tuscany and paprika.

7. What is your favourite place in Hungary?
Budapest

8. What career other than yours would you love to pursue?
Restaurateur, having my own restaurant (we bought the village bar in Tuscany where we go in summer)

9. What's a job you would definitely never want?
Prime Minister

10. Where did you spend your last vacation?
Our home in Tuscany

11. Where do you hope to spend your next one?
The same

12. What was your favourite band, film, or hobby as a teen?
Hobby: playing football
Film: The Red Shoes

13. What can't you resist?
Dobostorta

18. Which social issue do you feel most strongly about?
Racial discrimination and intolerance

20. What would you say is your personal motto?
The future is now