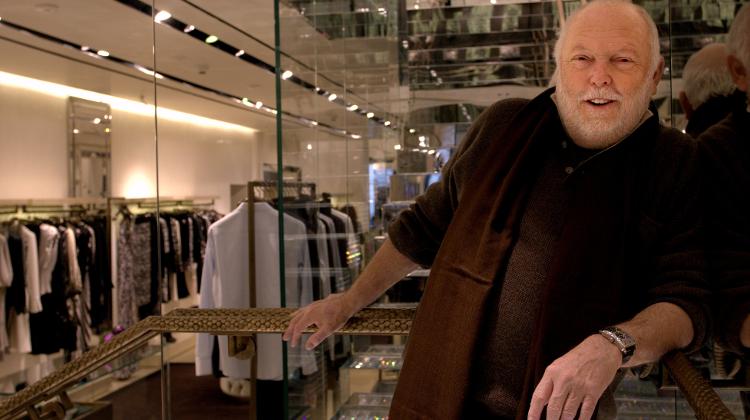 World famous Hungarian-born Hollywood Film Producer Andrew G. Vajna granted this exclusive interview with XpatLoop.com in Budapest. He shared insights with us about his childhood in Hungary, his love for cooking with fresh Hungarian ingredients, and his dream of experiencing life in the time of the Pharaohs.

Mr. Vajna was open, witty, and friendly in nature. He was also refreshingly candid in his answers to the standard 20 Xpat Interview questions.

Given his experience it made sense to ask a few extra questions too, and we continued chatting for a while after his PA signaled his next appointment was due.

Now an American citizen, András György Vajna (b. 1944) emigrated from Hungary to the U.S. over 50 years ago. After studying photography and cinematography, he soon set about making a name for himself in the film industry.

Vajna is the man behind such classic as the Rambo series, Tombstone, Total Recall, Basic Instinct, Nixon, and recently, Terminator: Salvation. Andy didn't meet with us to plug a film though; he was keen to share his story and love of Budapest.

Hollywood is an ever-changing landscape where the social and professional topography is as unpredictable as a movie’s opening numbers. A town and a business, Hollywood propagates the reputation of an impossibly glamorous wonderland, one of success and excess, but also one of unlikely odds for those hoping to “make it big”.

This Hungarian native stands out as someone able to break through. Here’s how Andy started out, his secret wish, along with other personal stories seldom shared.

1. Where did you grow up?
I spent my childhood in the hills of Buda, in the 12th district, and I went to school there, as my parents and I emigrated from Hungary to the US in 1956 when I was only 12 years old. Although I do not remember my school’s name, I still know where it is.

2. When you’re away from Hungary, what do you miss the most?
In the last two years, I spent half of my time in Hungary and half in parts of the US, so I am present in both places. I cannot say I miss either place as I am always focused on what I am doing at that moment, although I feel very comfortable in Budapest.. I have good friends and important businesses in both places.

3. What Hungarian traditions bring back fond memories of your childhood?
My favourite memories of my childhood in Hungary are those of when I could play with my friends in the streets and the fields around our homes, as in those times parks did not really exist. One of our favourite games was “számháború”, or “the war of numbers”. I am also fond of those summers we spent at Lake Balaton in Tihany on vacation with my parents, sometimes running out of money and eating crackers and jam. I remember that Christmas, too, when my grandfather gave me a violin, but later I stepped on it by mistake and that’s why I never became a violinist myself.

4. What is your favourite place in Hungary?
Hungary is a very exciting and diverse place with treasures that are found exclusively here. The vibrant capital, old Visegrád in Duna-kanyar and the picturesque Esztergom, charming Lake Balaton and the flatness of Hortobágy: all are exquisite. But for my heart, Budapest remains the closest, where I am most comfortable.

5. What is your favourite Hungarian word?
It’s funny. It is a rather well known story that at a ”language-contest” the participants wanted to persuade the jury about what is the most beautifully-sounding language by all saying the phrase ”I love you” in their own language. The Englander said, “I love you“, the Frenchman “Je t’aime”, the German ”Ich liebe dich”, and so on. The Hungarian participant was Frigyes Karinthy, who found himself in a big trouble. He thought that the Hungarian word ‘Szeretlek’ would sound like frog’s croak to the others, so he said instead the smoothly sounding word ’fülolaj’, and he won the contest. So now you know what my favourite word is.

6. Friends are in Budapest for a weekend, what must they absolutely see and do?
Recently, Robert De Niro, one of my very good friends, visited Budapest and I had the opportunity to show him around the capital. He was greatly impressed by the citys traditions and architecture. Even though De Niro, unfortunately, only stayed for two days, he managed to visit most of the important sites and cultural heritage buildings like Hero’s Square, the Parliament, the Castle District and the famous and renowned Gellért and Széchenyi Baths. This city has a secret potential, as it is old, spectacular and unique.

We had the honor of visiting the Hungarian Prime Minister, Orbán Viktor, who kindly showed us around Parliament, and the view from his office of the Danube and the Castle District, which was truly impressive. As food is also an important part of a country's culture, we dined one night at Rosenstein Restaurant, where we had the opportunity to taste excellent Hungarian-Jewish food. We simply ordered everything and had a rich, tasteful experience. The second night was reserved for Nobu.

7. What is your favorite Hungarian food?
I’ve always found Hungarian food very good and tasty, and I dearly remember my mother’s dishes. At the same time, I have to say I am rather disappointed with the restaurants here in Hungary as they are rather average, not offering anything special. Nobu Restaurant is a great, unique place in Budapest that opened recently and offers a fusion between Japanese and South American cuisine, a very exciting experience for everybody.

I opened Nobu here, as I believe in Budapest’s potential as a cuisine capital alongside Hong Kong and Milano. I am sure Nobu will succeed here and, as I am rather a perfectionist, we will offer the best service and the best quality food at Nobu. My favorite dish is one that unfortunately I cannot have any more: my mother’s Chicken Paprikás made according to our family recipe. In addition, I really miss the traditional Hungarian ‘főzelék’ that is very hard to find nowadays.

8. What is never missing from your fridge?
Hopefully, nothing is missing from my fridge. I love cooking, as it really comforts me. It is extremely relaxing. I love everything that is related to cooking, and a good dish begins with buying all the right ingredients. I like to go shopping around and have everything at hand. Here in Hungary, I go to the market more often because the fridge is smaller.

9. Where did you spend your last vacation? Where do you hope to spend your next holiday?
In the last 2 or 3 years I’ve had no time for vacation, but my last holiday was in Thailand (Phuket and Bankok) and Hong Kong. I do not like to plan too far in the future; however, I think that my next shorter vacation will be skiing in Aspen, as winter is coming.

11. What can’t you resist?
A beautiful woman, a good movie, and a funny joke. To laugh spontaneously, and films with Bill Murray.

12. Red or white wine?
I do not drink at all. I do not really like the taste of alcohol. So I prefer mineral water, with no bubbles.

13. Favorite form of exercise?
Although I do not have a favorite way, I like skiing because it is great to be outdoors, oh and tennis.

14. What were your favorite music, film and hobby as a teen?
As a teenager I loved photography. It was my hobby, and I studied it at school.When I went into cinematography in college, I briefly thought that I knew more about filming than all of my teachers, as most 19 year-olds would think. Then, shortly after, I realized it was not exactly true. Films were really fun for me back then. I remember once I sneaked in to the L.A. premier of the blockbuster Mad, Mad, Mad World. And of course in those times what else could have been my favorite music other than The Beatles and Elvis.

15. Favorite movies of all time?
My three favorite movies are Cabaret, with its brilliant coreorgraphy and music. The second could be Amadeus, and the third one is an old, black and white film, A Thousand Clowns, starring Jason Robards. I think nobody has heard about the last one.

16. And your favorite actors?
Oh, it is a hard question, as I’ve worked with so many of them. Robert De Niro is a truly exceptional actor, always able to show a new side of his personality and always able to come up with a unique performance. Antonio Banderas and Madonna were amazing in Evita, it was made for them.

It was a great experience to work with Anthony Hopkins in Nixon. It was interesting to see how he transformed from an actor who believed that he could not possibly perform authentically in the movie into someone who emotionally and physically, particularly in the body language, resembled so closely Nixon himself.

17. How about your 'Alan Smithee' film: Burn Hollywood Burn?
I did not want to do it immediately but, as I saw the great number of actors willing to participate in the movie like Sylvester Stallone, Bruce Willis and Arnold Schwarzenegger, so I did it.

The film was finally made starring Sylvester Stallone, Whoopi Goldberg and Jackie Chan. The Hungarian-born Joe Esterhas wrote the script. The film attempted to show the real face of the film industry in Hollywood, but director Robert Altman made a much more successful movie about this theme, a film called The Player, starring Julia Roberts and Bruce Willis.

18. And you made some horror films too?
Yes, Superstition (1982), Angel Heart (1987) and Jacob’s Ladder (1990) can all be considered part of the horror genre. Jacob’s Ladder is an intellectual horror story based on a screenplay by Bruce Joel Rubbin. It is about a guy who gets murdered during the Vietnam war. In his dying moments he flashes forward to see what his life might have been. Angel Heart is the story of a man making pact with the devil and howhe tries to avoid the result of the deal. This is a horror more in its subject than in its execution.

19. What do you think about Angelina Jolie filming in Budapest? Did you give her any advice?
No, I did not help her directly as she is doing a great job on her own. It is true though that I helped her with the names of a few people who are reliable here. Besides, sometimes she had dinner at Nobu.

20. What surprises you most about Hungary these days?
The negativity of the Hungarian people is something I cannot get used to. The answer is always a no and only afterwards does it become a yes. It is so time-consuming.

21. Which social issue do you feel most strongly about and why?
I really wish to take great care of the place where I live, and I wish I could spend more time on green issues that are nowadays so vital.

22. What’s your secret wish?
Then it won’t be a secret any more. Well, as I’ve been a couple of times to Egypt, I would like to experience life during the Pharaoh times. When I was there, I had the occasion to visit the pyramids at night and, in the semi-darkness that surrounded me, I could feel how insignificant I really was with the pyramids towering over me.

23. What would you say is your personal motto?
Don’t give up!