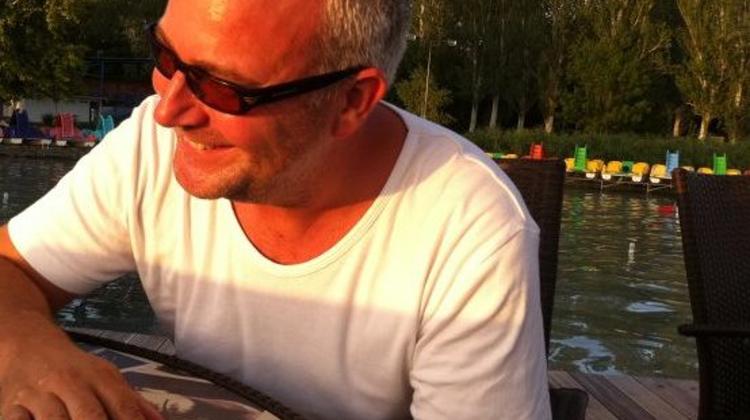 Ken is an English man from Newcastle upon Tyne, who at this time has been living in Hungary for 8 years, splitting his time between Budapest in the Winter and Paloznak (Balaton North Shore) in the Summer.

1. When did you arrive in Hungary and what brought you here?
I arrived in Hungary on 5th September 2003, I can be so specific because after driving here from England furniture in tow I attended my first new Hungarian friend’s wedding the next morning.

After living in Cambridge with my Hungarian girlfriend for 2 years I decided to come and try living in Hungary out for 6 months and never went back.

2. Have you ever been an expatriate elsewhere?
Hungary is my first time living abroad, I don’t say it will be the last port of call and I don’t say I’ll go back to the UK but maybe one day I’d like to live somewhere where it’s always hot.

3. What surprised you most about Hungary?
This is a thinker because I’ve been here so long now I’m like a chameleon blending into the surroundings. I suppose I’ll have to say it even though some Hungarians will hate me for it but some people can be selfish and only think of themselves, I write with the bad parkers in mind who park in 2 or more spaces or in disabled peoples spaces.

4. Friends are in Budapest for a weekend - what must they absolutely see and do?
Every time I get a visitor I always take them up to the castle district at night to see the city lights from above, still blows my mind after all these years.

5. What is your favourite Hungarian food?
Even though I am trying to avoid the Hungarian food these days due to an ever expanding waistline I am always still tempted by a good Goulash stew especially when its cooked outside on an open fire.

6. What is never missing from your refrigerator?
It’s a curse but its Túró Rudi. I hated them when I first tried them but now I’m hooked.

7. What is your favourite Hungarian word?
Puszi, for obvious schoolboy humour reasons.

8. What do you miss most from home?
I miss my two grown children who still live in the UK the most but if you’re asking about “a thing” then it would be Marks and Spencers food hall.

9. What career other than yours would you love to pursue?
I’ve always been interested in radio, either presenting a show or owning the station. Both of these seem to be well out of reach but I can dream.

10. What's a job you would definitely never want?
I wouldn’t want to be a Police officer because there are not enough hours in the day to clean up the things I’d like to clean up.

11. Where did you spend your last vacation?
I have just arrived back in Hungary after a fantastic all inclusive two weeks near Side, Turkey. My second visit to the same place and I have to say it still lived up to my expectations.

12. Where do you hope to spend your next holiday?
If I can get over my fear of flying I’d like to go back to Naples, Florida. I used to be a regular visitor but developed a fear of flying after a bad experience leaving Miami in a hurricane.

13. What was your favourite band, film, or hobby as a teen?
As a teen I was heavily into the Ska revival. The Specials being my favourite band of the era. Movie favourite would have to be and still is Back to the Future although I think I just turned 20 by then and not officially a teen. Never been one to have a specific hobby although I have always been into computing from the early days of the ZX Spectrum to my, as my girlfriend says, “obsession with my iPhone”.

14. What can't you resist?
I can’t resist a gin and tonic with ice and a slice.

15. Red wine or white?
I used to only drink white wine but for some reason as I have gotten older I have switched to red or maybe a rose fröccs on a hot summer day.

16. Book or movie?
Excuse my ignorance but it has to be a movie every time. If I’m going to read something I have to be learning something so I couldn’t read fiction. Not saying there is anything wrong with it and I know everyone always uses the same cliché “the book was much better than the movie” but I can’t see it myself. 3D, HD and 7.1 Dolby surround sound you don’t get that in a book.

17. Morning person or night person?
I’m definitely a night owl. Give me the run of the house when everyone else is asleep, that’s when my day starts.

18. Which social issue do you feel most strongly about?
A UK social issue which is something I feel strongly about is the apparent loss of control of the youth of the country. I know that makes my sound like an old person and I heard my parents say it many times when I was a boy but it’s still a fact “things weren’t like this when I was a kid”. Is corporal punishment in school the answer? I don’t know and I wouldn’t want any of my kids hit but it never did anyone any harm in my school.

19. Buda or Pest side?
As I live in Buda I’m going to stick with it. I very rarely go to Pest unless I’m having a night out and when I do go I always curse the traffic.

20. What would you say is your personal motto?
I'm going to borrow a quote from Irish dramatist, novelist, & poet Oscar Wilde. Ive always felt it summed me up. “We're all in the gutter, but some of us are looking at the stars.”