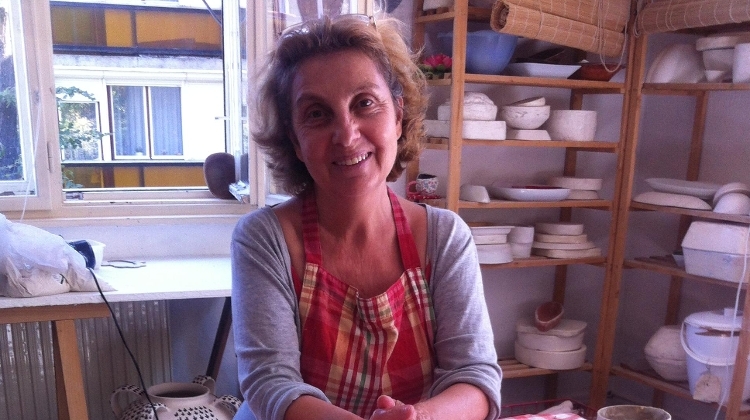 As well as working as a practising professional artist, with exhibitions internationally and throughout the UK, Jutka Fischer has been involved in cultural management activities for a number of years. This has included running festivals, workshops and courses for all age groups.

In 1997 she was invited to participate in workshops for the business community at Roffey Park, Surrey, where she worked with senior company managers to explore creative activity and how the Arts can influence new ways of thinking.

She has also been instrumental in developing centres of excellence for the Arts in rural communities. In Newhaven, East Sussex, these have included the establishment of the Chapel Arts Centre, fundraising for the Hillcrest Community Centre, organising a series of exhibitions of work by internationally renowned artists and working in partnership with local government to raise awareness of the arts.

In connection with Hungary, she has worked as UK tour manager for a Hungarian children’s theatre, and has also organised a touring exhibition of British artists which was shown in two venues in Hungary in 1998.

Influenced by her background, she has a particular interest in cultural exchanges, and in exploring and celebrating the richness of cultural diversity, and the social relevance of the Arts. Her commitment is to achieve this through delivering quality and excellence, in whatever medium.

Her pottery work is featured in many books on Contemporary Ceramics, and she has shown her work world-wide, including an exhibition in Japan where she was selected as one of five British women ceramic artists.

She is a regular exhibitor in the Brighton Festival in the UK, in the ’Diva’ Open House venue. In Hungary her work can be seen in the ’Kreatim’ Design Markets at the Applied Arts museum as well as other design fairs held regularly throughout the year.

Her work is in many private as well as public collections, including the South Eat Arts permanent collection at the Hove Musuem, and private collections of the designer Jean Muir and singer Joan Armatrading.

1. Where did you grow up?
In Budapest until the age of 7, then the next 14 years in San Jose, California . Age 21, moved to England, where I spent most of my life, til coming back to Hungary.

2. If you could be an expat anywhere in the world, where would you choose?
Venice

3. What would you miss most, if you moved away from Hungary?
Thermal baths, affordable and excellent restaurants, my friends, the weather and my wonderful neighbours, Adrien and Kálmán! Plus Túró Rudi.

4. Friends are in Budapest for the weekend-what must they absolutely see and do?
Start off in the Castle District, then a soak in the Gellert thermal baths, followed by a visit to the beautifully restored coffee palace in the Andrássy út Alexandra bookshop, for cakes, coffee and grand atmosphere. Then the Mai Mano House of Photography.
Weather permitting, renting kayaks at Romai rakpart, and a paddle up river, stopping for beer and sausages at one of the many charming riverside bufés. In the evening, the opera house, and/or any of the art cinemas.

5. What is your favourite food?
Almost any kind of seafood, but especially bouillaibaisse. In Hungary, stuffed peppers in tomato sauce,which my mother used to make brilliantly.

6. What is your favourite sport/form of exercise?
Swimming and walking. But I don’t get enough of either.

7. What is your favourite place in Hungary?
My tiny vineyard on the south side of Somlo hillside- a charming and magical wine-growing region. It is a National Park, where the volcanic hillside is dotted with small cottages/wine cellars . I think mine is the smallest in the area? Unfortuantely I do not have the chance to go there often.

8. What career other than yours would you love to pursue?
Musician! I always wanted to be a singer, and when I was younger, sang and played in a semi-professional band in California – bluegrass and country/folk. I was obviously rubbishy, otherwise would still be doing it! Also early and baroque music on the violin with friends in the UK. Biggest pleasure before coming to Hungary was playing music, mostly quartets with friends every weekend, in my house in Newhaven. Music has been an all-time passion.

9. What’s a job you would definitely never want?
Pilot of a jumbo jet!

10. Where did you spend your last vacation?
Venice – my son kindly sacrificed a week of his time, away from his girlfriend, and came with me to explore Venice. We booked at the last minute, but luckily found a large, comfortable apartment in the Cannaregio district, a non-touristy area to the North of the city, with three parallel long canals, dotted with quiet cafes and bars, and only a short vaporetto ride from Murano, which I loved so much we went out twice a day.
We spent our time exploring themany smaller churches, in tucked away squares and piazzas, and having meals out in fabulous restaurants. It was great, and I can’t wait to go again.

11. Where do you hope to spend your next one?
Venice

12. What was your favourite band, film, or hobby as a teen?
Band - Bob Dylan, he was a God! I have bucketsful of respect for him as an artist and singer. He has never got stuck and keeps moving forward, experimenting . After all these years, he still has someting new to say.
Film - The Apu Trilogy, by Satyajit Ray.
When I was 16 and our family was living in California suburbs, the film was shown on TV on three consecutive nights. Everyone in my family had gone to bed, so I was in our TV den alone and those three nights sitting in the quiet house, watching the beautiful story unfold, was one of the most blissful experiences of my teenage years, and a revelation about quality arts. It is now listed as one of the world’s all time greatest films. I still get shivers when I think of the effect it had on me then, so long ago.
Hobby- Making music with friends, and cooking.

13. What can’t you resist?
Invitation to go out and have fun!

15. Book or Movie?
Book, I think? Usually better quality. Although I am a film addict, they are often a bit disappointing.

16. Morning person or night person.
Definitely morning, when I am keen to get on with things. Night time, I am happy to be a „Fotel Krumpli” - couch potato.

17. Which social issue do you feel most strongly about?
The way in which the present Hungarian government encourages intolerance and racism in order to get more votes.

18. Buda or Pest side?
Buda for the air and greenery and space for my cats to run around, and Pest for films, shopping, and great cafés like the Dunapark Kávézó.

19. Which achievement in your life are you most pleased about?
Personally, adopting my son Ben when he was just 3 months old, in 1991.
Professionally, running my own art gallery, ’Tides’, on the South coast of England, which was added to the British Crafts Council’s list of selected and approved galleries. I showed work by a variety of artists, and loved every minute of that and met many wonderful people and great artists, many of whom have remained close friends. An invitation from the Crafts Council to join their regional advisory panel, South East Arts, was also nice.

With my own ceramics, I suppose emails like one I had just recently are very rewarding. Out of the blue a person in Belgium wrote simply to tell me that he had bought some ofmy ceramic pieces in a gallery in Maastricht, about 20 or so years ago, and he still loves looking at them! So kind of him to write, and so lovely to hear.

20. What would you say is your personal motto?
Despite passionately loving beautiful objects and „things”, and making tangible artefacts for my profession as a potter, my favourite motto is: „The best things in life aren’t things.”