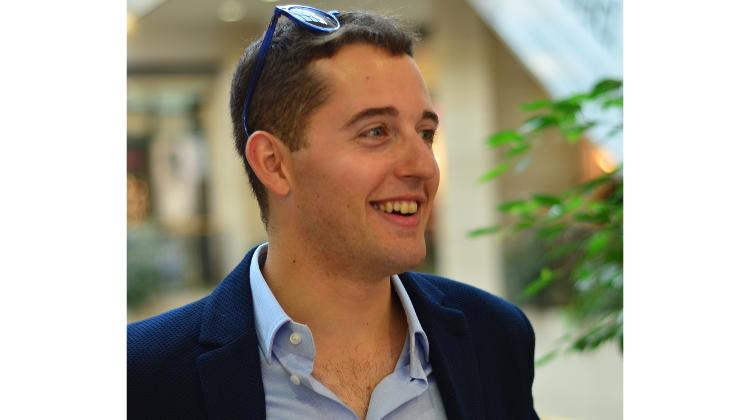 Peter Mezey Kaufman is a New Yorker who returned to Budapest to seek his Hungarian roots and founded Hungary's only active English improvisation theater, bringing the latest New York styles to the Hungarian capital. Peter studied math and computer science at Brown University and spent time on Wall Street before taking up acting as a hobby. It didn't take long for the hobby to become a career and you can now see Peter all around the city giving presentations, shows and workshops in diverse locations including co-working spaces, Brody Studios and the Kozma utca jail.

Peter's group - "Red Ball Theater" - offers English-language beginner's improvisation classes, comedy open-mic nights, social anxiety bootcamps and much more that you can read about on their website or on Facebook.

1. Where did you grow up?
New York - born in Manhattan, raised in the suburbs. Despite my name I didn't grow up with Hungarian culture at all. When I was 20 I wanted to move to Europe and read about the Hungarian citizenship deal so I had to check with my grandfather, "Papa, are you Hungarian?"

2. If you could be an expat anywhere in the world, where would you choose?
Budapest.

3. What would you miss most if you moved away from Hungary?
The language. I tried to escape Budapest by moving to Poland and it was wonderful except every time I heard Hungarian in the street my brain lit up like I'd taken a double shot of Italian espresso. That's when I knew I had to go back.

4. Friends are in Budapest for a weekend - what must they absolutely see and do?
I don't care as long as they don't drag me to Szimpla kert.

5. What is your favourite food?
Tiramisu. Best in Budapest is Trattoria Toscana.

6. What is your favourite sport / form of exercise?
I play basketball every Sunday morning and we don't call fouls so we can get our aggression out. It's therapy.

7. What is your favourite place in Hungary?
Harmashatar hegy. Whole other world, 10 minutes from the körüt.

8. What career other than yours would you love to pursue?
Wouldn't change a thing.

9. What’s a job you would definitely never want?
Anything in hospitality. Before we moved to the US my family owned cafes all over Hungary including the predecessor to Central Kavehaz so it's in my blood but long inconvenient hours aren't my thing.

10. Where did you spend your last vacation?
Camping in Tarjan, near Tatabanya. I used to do the whole "backpack around and party in every city" deal but now I crave nature.

11. Where do you hope to spend your next one?
Skiing in Austria.

12. What was your favourite band, film, or hobby as a teen?
Billy Joel. Got to seem him at the Garden when I was 15. I agree with him - Vienna can wait

13. Apart of temptation what can’t you resist?
Sending biting facebook messages. If I get a message that pisses me off I'll type out my first instinct which is usually vicious. Then I'll think "what would happen if I actually sent this?" and laugh to myself. Of course at that point I can't resist sending it. I'm working on it

15. Book or movie?
Book - I prefer my imagination to fill in the blanks than to be pummeled by subliminal messaging from Hollywood.

16. Morning person or night person?
Morning. When I'm in the zone I work 6AM - 2PM non-stop then go outside and socialize. When I got here in 2012 I'd be out until dawn most nights but not anymore.

17. Which social issue do you feel most strongly about?
The destruction of community. The median number of friends for an adult male in the West is zero and women don't have many more. Humans need community - a place to meet people, grow as a human, and be supported through hard times. My core mission through Red Ball Theater is to create that community. The entertainment is extra.

18. Buda or Pest side?
Life-long Pesti but I'm moving to Buda.

19. Which achievement in your life are you most pleased about?
The very first improv class I taught was to a Hungarian group. I was told to do the workshop in English but it turned out everyone spoke Hungarian and they were translating it to each other. Despite not speaking well at that point, I switched to Hungarian and changed the exercises on the spot to focus on physicality so I didn't need to understand the words. The workshop went smoothly after that and that's when I knew I could make it.

20. What would you say is your personal motto?
Stay put and hustle.