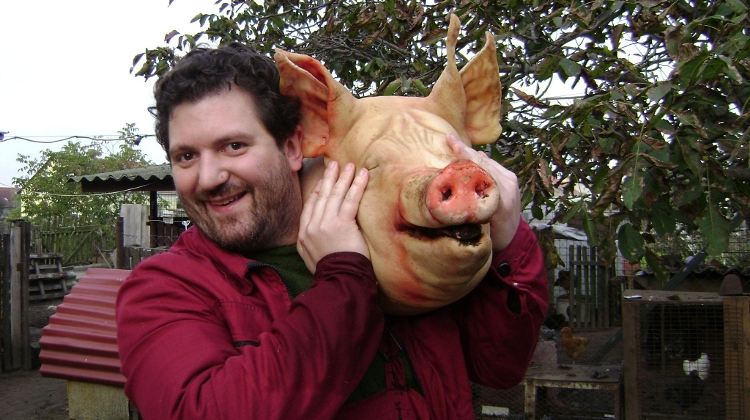 In 2015 and 2017, Patrick won a translation grant from the Milán Füst foundation to support his work translating plays by Milán Füst (Boldogtalanok) and Sándor Bródy (A dada). He plans to continue his work as a literary translator and dreams of producing an anthology of classic Hungarian plays in his own English translations.

Born in Peoria, Illinois on April 11, 1978, the last of six children, he spent the first 18 years of his life in his hometown. Highlights were singing in the children's chorus, Peoria Area Youth Chorale and appearing in a handful of local theatre productions, including high school musicals. He was also active on the speech team and qualified for state competition twice.

By that time, Patrick Mullowney had begun writing plays, so he sought out a dramatic writing program. As a result, he enrolled at the Tisch School of the Arts in New York University, where he earned a degree in playwriting. At the same time, he also earned a bachelor's degree in mathematics.

Those were exciting years.  As a member of the Tisch Art Scholar's program, he was able to travel abroad with the university every year. Between 1997 and 2000, he visited Spain, Brazil, China, and Mexico, in addition to completing a summer semester in Paris studying cinema and screenwriting.

He also completed an internship at Soho Repertory Theater, which hosted a reading of his original play, Gibbous Moon.

After graduation, Patrick Mullowney moved to a small studio apartment in Harlem, where his French pal Didier was superintendent. He worked in a real estate management office on the Upper West Side. In his spare time, he continued working at theaters -- namely, Theatre for the New City and Medicine Show.

At the later venue, he has showcased his work in multiple staged readings (Gibbous Moon, Devotee, The Fate of Orpheus) and collaborated as a dramaturge on a handful of projects, even collaborating original material.

In 2002, he traveled to Budapest for adventure and inspiration. This was a fateful step, since he has remained ever since.

The first ten years were mostly preoccupied with English teaching and learning Hungarian. Since then, he has gradually phased out teaching in favor of translation jobs, mostly working for museums and theatres. For the latter, he regularly provides surtitles and English dubbing.

His work as a theatre critic has been sporadic. For a brief period, he was featured as a guest critic, altogether 10 times, on Kossuth Radio's Kultúrkör program hosted by Erzsi Sándor. Since November 2017, he has recommenced his critical activities with the Budapest Theatre Digest.

Occasionally, he takes on small voice and acting assignments.  He has appeared in beer commercials and a Toyota ad (which ran exclusively in Japan), and he received a small role in the soon-to-be-released film Lords of Chaos. He is most proud, though, of narrating a short animated movie of János Arany's ballad "The Bards of Wales". It was shown publicly, with great success, in Cardiff and can be viewed on YouTube.
1. When did you arrive in Hungary and what brought you here?
I originally came as a tourist in 2001. I wanted to explore more of Europe and wanted to step into the unknown.  After consulting a map, I figured that Hungary would be a good destination, but I knew so little about the country. Bartok and goulash was the sum of my knowledge. I was working on a staged reading of my own play in Manhattan's Medicine Show Theatre at the time, and the composer asked me, "What are you doing after the production?" I told him I was considering going to Hungary. "Great place," he replied, "You can live like a king on little money." I bought my plane ticket the next day.

2. Have you ever been an expatriate elsewhere?
Not really. I lived in Paris for two and a half months, but I was a college student. I did a summer semester there in cinema and screenwriting.

3. What surprised you most about Hungary?
Perhaps the fact that I felt so at home here.

4. Friends are in Budapest for a weekend - what must they absolutely see and do?
Weather permitting; I think the Children's Railroad is a must. I also try to drag friends to the Agricultural Museum.
Statue Park is always popular with visitors from the West.

5. What is your favourite Hungarian food?
The layered cabbage dish: rakott kelkáposzta.

6. What is never missing from your refrigerator?
Erős Pista, the hot paprika sauce.

7. What is your favourite Hungarian word?
Önkielégítés.

8. What do you miss the most from home?
Sometimes a thick milkshake, sometimes a rare steak.

9. What career other than yours would you love to pursue?
Well, I am a trained dramaturge. It would be nice to actually do that for a living.

10. What's a job you would definitely never want?
Lifeguard. It is too much responsibility, and I would hate spending all day on the beach. I find it boring.

11. Where did you spend your last vacation?
I met a friend from New York in Istanbul. We spent four days there.

12. Where do you hope to spend your next one?
There are many places I would still love to see - for example, Greece and Norway. I would love to return to Mexico one day. I loved Guanajuato.

13. What was your favourite band, film, or hobby as a teen?
I was absolutely captivated by Nirvana. They were the hottest when I left middle school and went to high school. I also loved The Pixies.  My favourite movie at the time was Manchurian Candidate. At one of my birthday parties, I forced all the guests to sit through it. One of them told me recently that it traumatized her. As a teen, my passion was theatre, and I was very active in local productions.  I dreamed of being a famous actor, but then I had already begun writing plays,  and writing eventually took precedence over performing.

14. Apart of temptation what can't you resist?
An invitation to dinner.

16. Book or movie?
Although I love movies, I enjoy curling up with a book even more.

17. Morning person or night person?
I like both. That's why I like to take a siesta in the middle of the day.

18. Which social issue do you feel most strongly about?
Bigotry, racism, and nationalism upset me the most currently.

19. Buda side or Pest side?
I prefer to live in Buda, but then I always have to travel to Pest for theatre and nightlife.

20. What would you say is your personal motto?
Stupidity, fly from me!