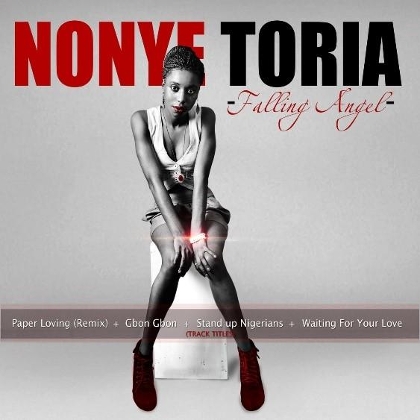 Victoria - Joy Nonye Okocha aka Nonye Toria was born and raised in Lagos although she is from a Royal Bloodline in Ubuluku town, Delta State Nigeria, she left for England at age 13. Music has always been a part of her life since childhood, Nonye started in Sarafina Musical when she was in St Dominic’s Primary School, joined a Mo-Town band at East Berkshire College Langley, UK in 2006 where she performed covers from The Temptation, Johnny Cash and Old school Blues.

Nonye later went on to perform for the Queen of England 2008 from her performing Arts School, the musical she was performing at that time was called “GodSpell” and her number “Day by Day” was the Queen’s favorite. Later that year, Nonye also appeared in Britain’s largest soap opera “East enders”. Nonye appeared on a few episodes as well as a lot of musical productions and performed in quite a number of shows.

Coming back to Nigeria August 2011 was the best decision she could make; she was fresh, innovative and had a creative sense. She spent three months in Liberia working with IEDA Relief (International Emergency Development Agency) as she enjoys the Humanitarian services. Nonye Toria also worked with Dayo Israel GLEEHD Foundation creating youth empowerment programs for the local and national Nigerian government in affiliation with the UN.

Nonye Toria believes in the spirituality of music and its uses to heal the soul and to heal the earth.

You can reach her through the following: Twitter: @nonyetoria

1. When did you arrive in Hungary and what brought you here?
5th February, University education.

2. Have you ever been an expatriate elsewhere?
Yes I lived in Poland, Mali and other countries.

3. What surprised you most about Hungary?
It is surprisingly multicultural.

4. Friends are in Budapest for a weekend - what must they absolutely see and do?
Buda Castle

5. What is your favourite Hungarian food?
Fishermans soup

6. What is never missing from your refrigerator?
Cheese

7. What is your favourite Hungarian word?
Köszi.

8. What do you miss the most from home?
Hot weather.

9. What career other than yours would you love to pursue?
Music

10. What's a job you would definitely never want?
Journalist

11. Where did you spend your last vacation?
England

12. Where do you hope to spend your next one?
Italy

13. What was your favourite band, film, or hobby as a teen?
Linkin park

14. Apart of temptation what can't you resist?
Tall men

18. Which social issue do you feel most strongly about?
Liberalism

19. Buda side or Pest side?
Buda side

20. What would you say is your personal motto?
To be the best I can be.