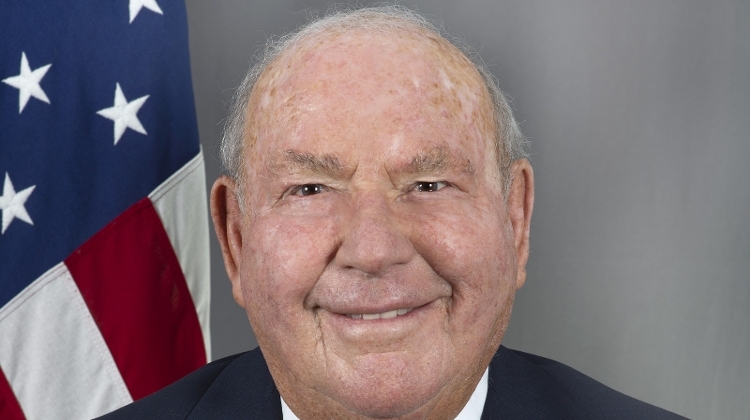 David B. Cornstein was appointed by President Donald Trump to serve as the Ambassador Extraordinary and Plenipotentiary of the United States of America to Hungary.  He was confirmed by the United States Senate on May 24, 2018 and presented his credentials to the President of the Republic of Hungary on June 25, 2018.

A lifelong New Yorker, David Cornstein has built a record of achievement as a businessman and leader.  As Chairman and CEO, he helped build over a billion-dollar NASDAQ Stock Exchange Company and, in addition, at Off Track Betting – NYC, he turned around a failing government entity where he was Chairman for 16 years to make it effective, efficient, and very profitable.

David Cornstein was named the Chairman of the New York State Olympic Games Commission to bring the 2012 Summer Olympic Games to New York City.  He has served as a Board Member of Jacob Javits Development Corporation, a member on the New York State Council on State Productivity, Board Member of Battery Park, and with Richard Parsons as Vice Chairman of the Economic Development Corporation of New York City.

For his lifelong achievements in business and public service, he has been honored as “Man of the Year” by the Juvenile Diabetes Foundation, Chemotherapy Foundation, Friars Club Foundation, and the Park East Day School, and has helped raise millions of dollars for these organizations.

He was the commencement speaker at the Stern School of Business of New York University.  He served on the Board of Directors of New York Law School, Jewish Community Relations Council, Marine Corps-Law Enforcement Foundation, and Park East Synagogue.

In the past, he served as Chairman of the World Presidents’ Organization and is currently a member of the Chief Executives’ Organization.  He is an active philanthropist through the David and Sheila Cornstein Foundation.

Ambassador Cornstein earned a Bachelor of Arts degree from Lafayette University and a Masters of Business Administration from New York University.  He and his wife, Sheila, have two children and one grandson.

1. When did you arrive in Hungary and what brought you here?
I moved here on June 22, 2018, to serve as the United States Ambassador to Hungary.

2. Have you ever been an expatriate elsewhere?
No.

3. What surprised you most about Hungary?
There are a lot of good news stories here that don’t often get covered in the international press--the economy is strong, the culture is rich, and Hungarians are incredibly smart and talented.

4. Friends are in Budapest for a weekend - what must they absolutely see and do?
There are a lot of great options, but I always recommend the Castle District and a tour of Parliament.

6. What is never missing from your refrigerator?
Spicy mustard.

7. What is your favorite Hungarian word?
I like to hear “szabadság,” because I like to hear about freedom and liberty.  Of course, it’s also the name of the square where the American Embassy is located.

8. What do you miss most from home?
My grandson - he’s 13 years old and lives in New York.

9. What career other than yours would you love to pursue?
I’m a proud New Yorker, and for a long time I wanted to be the mayor of New York.  But I’m honored to find myself in public service in another capacity, as U.S. Ambassador.

10. What's a job you would definitely never want?
I don’t have an answer for that - I think I can find something positive about almost any profession.

11. Where did you spend your last vacation?
In September I went back to the United States for my grandson’s bar mitzvah and to see family and friends.

12. Where do you hope to spend your next holiday?
In New York with my family, to celebrate my son’s birthday.

13. Apart of temptation what can't you resist?
Ice cream.

14. What was your favorite band, film, or hobby as a teen?
American football.

16. Book or movie?
Movie - I especially like the Godfather.

18. Which social issue do you feel most strongly about?
It’s not necessarily a specific issue, but I am a firm believer in philanthropy and the idea that those who are successful in the private sector should look for meaningful ways to improve the welfare of those in need.

19. Buda or Pest side?
Buda is beautiful and peaceful, but I’m a New Yorker - I love the vibrancy of Pest.

20. What would you say is your personal motto?
Work hard and follow your dreams.