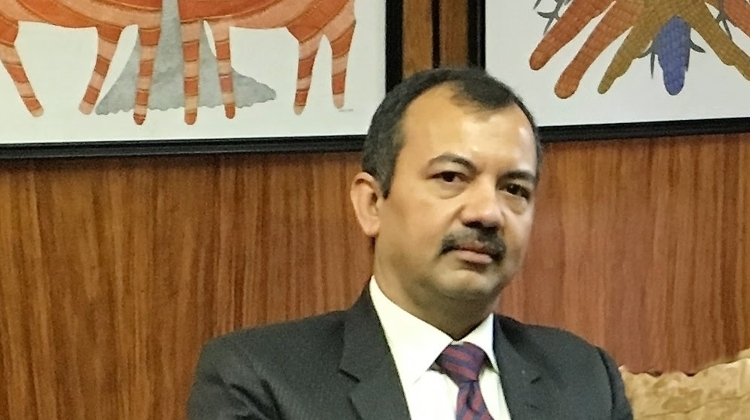 Ambassador Kumar Tuhin joined the Indian Foreign Service in 1991. He assumed charge as India’s Ambassador to Hungary from November 19, 2018. Before arriving in Hungary, he was India’s High Commissioner to Namibia from 2015-2018.

Ambassador Kumar Tuhin started his career in the Indian Mission in Hong Kong in 1993, where he served till 1995.  Subsequently, he moved to the Indian Embassy in Beijing where he worked as a political officer from 1995 to 1999.

He has also served in the Ministry of External Affairs in New Delhi in various capacities including as Deputy Secretary/Director dealing with China and East Asia matters during 2002-2005.

During 2012-2015, he headed the Development Partnership Administration Division in the Ministry dealing with the entire capacity building programs of the Govt of India, including the Indian Technical and Economic Cooperation programme as well as implementation of grant assistance projects in South East Asia, Middle East, Central Asia, Latin America and setting up of Centres of Excellence in IT and the Vocational Training Centres abroad.

He has also attended a leadership programme at the Near East South Asia Center for Strategic Studies at the National Defence University in Washington DC.   He has published an article entitled “India’s development cooperation through capacity building” in a book “India’s Approach to Development Cooperation” by Routledge, 2016

Kumar Tuhin is married and he has two daughters.

1. When did you arrive in Hungary and what brought you here?
I reached Hungary on November 19, 2018. Of course, it was a decision of my government to send me here to represent India.

2. Have you ever been an expatriate elsewhere?
I consider myself privileged to have served in so many wonderful countries before. I started my career in Hong Kong, and thereafter served in Indian Missions in Beijing, Geneva, Hanoi, San Francisco and Windhoek. Working in embassies is unique since you lead the life of an expatriate while still working in your country!

3. What surprised you most about Hungary?
That there is a Hungarian law on names and that you can choose a name only from an approved list.

4. Friends are in Budapest for a weekend - what must they absolutely see and do?
Must see the Parliament and the Crown of St Stephen’s. Must take a dip in one of the spectacular thermal baths here.

5.  What is your favourite Hungarian food?
Paprikás csirke followed by a Hungarian dessert.

6. What is never missing from your refrigerator?
Chaat Masala - the evergreen Indian spice mix to enliven any dish.

7. What is your favourite Hungarian word?
Akkor később találkozunk. The smile that I see on the faces of my Hungarian friends when I say that.....

8. What do you miss the most from home?
Indian festivals. It is then that it hits me that I am not in India.

9. What career other than yours would you love to pursue?
There is nothing that comes even distant second to my current job. But if I must choose something else, I will settle for photography.  It will be fun to play with colours and shapes.

10. What's a job you would definitely never want?
Accountant, I would rather spend money myself than keep track of someone else’s expenditure.

11. Where did you spend your last vacation?
Namibia.  The pristine wilderness of that country was mesmerising.  Etosha, Sossusvlei, Sandwich Harbour, and so many more.

12. Where do you hope to spend your next one?
Somewhere in Latin America or Australia, as I have never been on those continents yet.

13. What was your favourite band, film, or hobby as a teen?
I used to play a percussion instrument in my school band. We used to play for hours losing track of time and the world outside.

14. Apart of temptation what can't you resist?
Indian Mangoes.  What would this life be without those magnificent creations of Mother Nature.

15. Red wine or white?
Neither. Still water at room temperature, with a dash of lime if possible.

16. Book or movie?
Generally speaking, books. You can imagine your own movie with a book. But some movies with fantastic special effects are just spellbinding.

19. What would you say is your personal motto?
The verse from Bhagvad Gita, which says that one should continue doing his or her duty without being worried about getting the results.