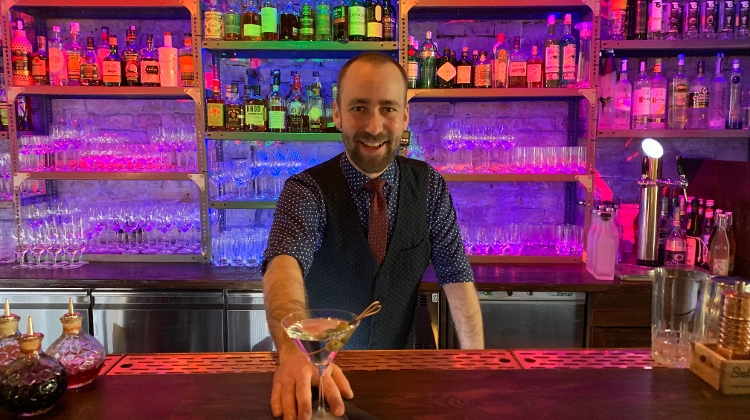 I was born in Budapest on 25 April 1986. As a teenager I was open to art, music especially, which was (and still is) a serious influence and source of inspiration. During my highschool years I learned to play the trombone and the guitar.

I studied Hungarian (literature and linguistics) and Communication & Media at the Faculty of Arts of Pázmány Péter Catholic University.

I got into hospitality as a hostel receptionist in 2011, during my university years, where I had to serve coffee, lemonades, draft beer. Immediately I got interested in making drinks and serving them to guests. Since then I worked in a ruin bar, fine dining restaurants, private events and currently and for a while now, in a members’ social club.

In 2015 I was ranked first at the bartenders’ cocktail competition of Whisky Show Budapest, and got to the national finals of Bacardí Legacy Cocktail Competition in the same year.

In 2018 I was honored to become bar manager in The Workshop, BrodyLand’s newest venue.

1. Where did you grow up?
I grew up in the countryside of Hungary, but still quite close to Budapest (approx. 50km distance) in a tiny village with 2 streets and population of 450 back in the day. The village is expanding - now it has 5 streets! We were playing football and biking outside all the time, eating loads of fresh stuff from our garden, so at a point later on I'm sure I'll want to return.

2. If you could be an expat anywhere in the world, where would you choose?
My favourite city is Berlin, I love the culture, the art, the people - and the bar scene as well.

3. What would you miss most if you moved away from Hungary?
My family, my friends and the food - Túró Rudi especially (chocolate coated curd snack very popular in Hungary since the 1960's).

4. Friends are inBudapest for a weekend - what must they absolutely see and do?
Nobody visiting Budapest should miss the baths, i would recommend Széchenyi, one of the most famous ones. Also, as a bartender, I would take them out for an evening, we have a vivid nightlife in the city, with ruin bars and so on. Occasionally we even have parties in the baths, that would be 2in1. But beforehand, I would also take them to the Labyrinth under the Buda Castle.

5. What is your favourite food?
Jókai bean soup, a traditional Hungarian dish. I usually make a vegetarian version of it at home, and it's still delicious.

6. What is your favourite sport / form of exercise?
I really like biking and shaking cocktails.

7. What is your favourite place in Hungary?
At the moment I am very much into the Buda Hills, you can have the most beautiful view to Budapest from this area, and is a great location for a hike.

8. What career other than yours would you love to pursue?
If I haven't found enough joy in bartending, I'd be a teacher Hungarian literature and language, or be a cultural journalist.

9. What’s a job you would definitely never want?
I feel a regular office job sitting 8 hours in front of a computer 5 days a week is not for me. The truth is I never tried to work like this, but I feel I'd be bored.

10. Where did you spend your last vacation?
In Lisbon, Portugal.

11. Where do you hope to spend your next one?
I'm planning to go to Munich to visit a friend, after that, I'd love to travel to South East Asia.

12. What was your favourite band, film, or hobby as a teen?
I still play the guitar, music was a very significant influence on my early years. I also played the trombone, but my true love has always been the guitar.

13. Apart of temptation what can't you resist?
The Last Word, my favourite Gin cocktail.

14. Red wine or white?
White in general, but highly depending on the season.

15. Book or movie?
Book, always. There are a lot of great adaptations, but a movie can never go into that much of detail.

17. Which social issue do you feel most strongly about?
Child hunger and homelessness.

19. Which achievement in your life are you most pleased about?
I'm very proud on my current job, to be the bar manager of The Workshop.

20. What would you say is your personal motto?
"Nothing is terrible except fear itself." - Francis Bacon