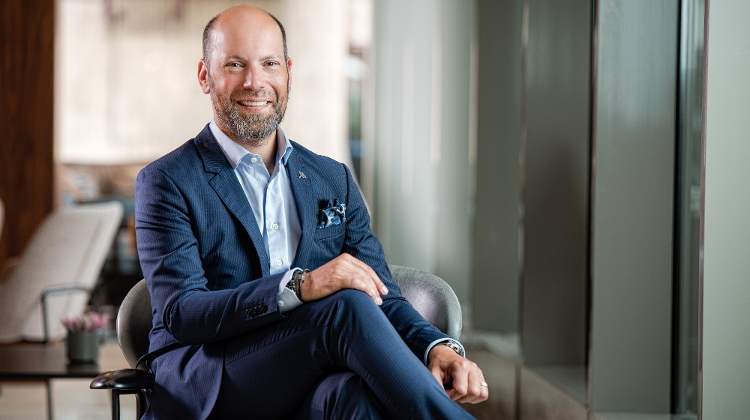 An open-minded, truly cosmopolitan expat with a passion for gastronomy and social responsibility, Arne arrived Budapest a year ago.

The General Manager of the Budapest Marriott Hotel and Millennium Court, Marriott Executive Apartment loves the city and its charm. Arne has more than 20 years’ experience across truism and hospitality. He moved to Budapest from Turkey, where he spent 3 years at the Istanbul Marriott Hotel Sisli.

In the past year he focused on the hotel renovation and redesign which result the first M Club Lounge in Eastern Europe and the reimagined ground floor with two new food and beverage outlets with a redefined concept and brand new menu; DNB Budapest restaurant and Liz and Chain bar. The renovation will be completed by the end of August with the transformation of the event floor and the conference rooms.

1. When did you arrive in Hungary and what brought you here?
Marriott brought me here on 15 May 2018, with my family. So it has been a bit more than a year that I’ve been living and working in Budapest.

My wife was pregnant, in her 33rd week, and we had to move fast otherwise the airline wouldn’t take her. By now I am the happy father of a second child. And it was the second time we moved while she was pregnant; previously my wife was also eight month pregnant when we moved to live in Istanbul, and our daughter was born there.

The owner already joked that the next time my wife becomes pregnant he knows we are going to move again. At the moment we plan to leave it at two children.

2. Have you ever been an expatriate elsewhere?
Prior to Turkey, we were in Paris, France for 4 years. I started my career as a Front Desk Agent with Marriott in London. Later at the age of 29, I was the youngest GM at Marriott in Europe.

I speak three languages fluently, German, English, and French. I have not mastered Hungarian yet.

3. What surprised you most about Hungary?
Many things, really many, from the one of the most warmest welcomes I have ever experienced as a new GM the fact that many taxi drives speak English, to shops being closed on Sunday afternoons, to that we were responsible for putting our own garbage out (in Turkey it’s trashed for you).

4. Friends are in Budapest for a weekend - what must they absolutely see and do?
Firstly it’s notable that more friends come here than to the previous destination. What they do depends on who’s visiting of course.

As a father I am a master of the best playgrounds in the city. For example Olympic Park is brilliant, there is a wonderful playground on Liberty Hill towards Gellért Hotel with great slides - I wish I could fit on them. And there is another good one on top of Vérmező.

It is a magnificent city to really to look at all those amazing sights, whether is a tour of the parliament, the Budapest baths are amazing, plus I would also recommend spending a couple of days visiting the Hungarian countryside. For example there is a great tour around Lake Balaton, visiting wineries.

Also when friends come over, since I like running in the morning I take them to the Margaret Island, I think it is a great way to showcase the city.

5. What is your favourite Hungarian food?
Kürtőskalács, because I have a sweet tooth. The traditional one is the best, but you can also experiment with it a bit. For the first time recently when we went to the Gourmet Festival I had a salty kürtőskalács made with rosemary and filled with fois-gras. Kürtőskalács has a lot of potential!

6. What is never missing from your refrigerator?
Beer, and Dijon mustard since we lived in France. I like spicy food, so since we live here I have Erős Pista in the fridge.

7. What is your favourite Hungarian word?
I do not think I have any yet really.  We had this discussion at home recently, as my daughter at the age of 3.5 years came back from her English nursery and said, “Daddy I speak Hungarian now”, and  I replied, “Wow really, ok so tell me something in Hungarian, and she said, “Igen”. I could say that, or kürtőskalács.

8. What do you miss most from home?
Hungary is my home now. This is interesting; maybe I have two homes, because whenever we are going to spend a couple of days in my home town, we say we go home. But just the same, when we return here we also say we go home. So I guess I am really blessed to say I have two homes, and I do not really miss anything.

9. What career other than yours would you love to pursue?
In my second life I would probably become a hotel doorman. I think it is the most rewarding job in a hotel. You are the first and last to touch each guest. And you can work outside in the fresh air. Whenever we have special events with stars or Ambassadors coming to the hotel, you are the one to meet them first.

10. What's a job you would definitely never want?
One where every day is the same, one where I would be stuck in an office.

11. Where did you spend your last vacation?
In Norway. Fun fact is that I learnt skiing at the age of 41, as I never had the opportunity earlier because we never went skiing when I was young. So we recently said let’s go to Norway because it would be great for our daughter to learn to ski. So we went and my wife and I had so much fun too, and we plan to go back.

12. What is your dream holiday destination?
I would like to see so many places where I haven’t been yet. It’s a huge bucket list. On top of the list is a visit to the Balkans while living here, as I’ve heard they have brilliant spots to visit there.

Whenever I have the opportunity to travel with the company I always take one extra day in advance or after to be able to have a look around. For example I went to a sales course to Aman a year ago and decided that while already in Jordan to visit Petra, which was an absolute highlight.

13. Apart of temptation what can't you resist?
Sweets, in particular chocolate. I like sour Harribos especially if you eat M&M’s first :-)

14. What was your favourite band, film, or hobby as a teen?
I was a fan of Bonnie Bianco, she is an Italian artist. There was a movie she was in called Cinderella 87. My father once took me to a soccer game where she performed before the match, and I managed to get her autograph. By the end of the match my father asked, how did you like to game? And I said to him, what was the final score? As I was just looking at her autograph for the whole game.

As a teen I played tennis, entered the local cup, and went to tournaments but not at a professional level. I started playing because there were great players in Germany. I would love to find someone to practice with here in Budapest, close to where I live there is a court at Petneházi.

16. Book or movie?
Books, mainly I like to read biographies. I am reading a book right now by a German actor called Axel Milberg. There is a TV crime series in Germany every Sunday, with episodes of 90 minutes shot in different cities, and one of them is Kiel where I am from. This actor wrote a book (Düsternbrook) about how he grew up in this area of the city of Kiel, and it is very well written and it’s how I experienced it myself.

17. Morning person or night person?
Depends. Morning at work, night for private, and my wife is the same – we are often the last ones at an event.

18. Which social issue do you feel most strongly about?
Pollution and sustainability worries me a lot. At Marriott, as part of our corporate social responsibility, we really make efforts in order to be more sustainable, and there is so much needs to be done. The topic of plastic bottles for example, we want to get rid of them. We tested it, since we have bottles everywhere. The amount we waste is just unbelievable.

We will install water dispensers on each floor, where guest can fill the bottles provided by Hotel. We recently collected plastic garbage at Gellért Hill and gathered 17 bags of garbage. If you go around Margaret Island and you see all dust bins full, it is a terrible situation.

19. Buda or Pest side?
I opt for both! Living in Buda, partying in Pest.

20. What would you say is your personal motto?
I like the world ‘more’, and everything with more added to it. More guests, more revenues, more destinations to travel to...