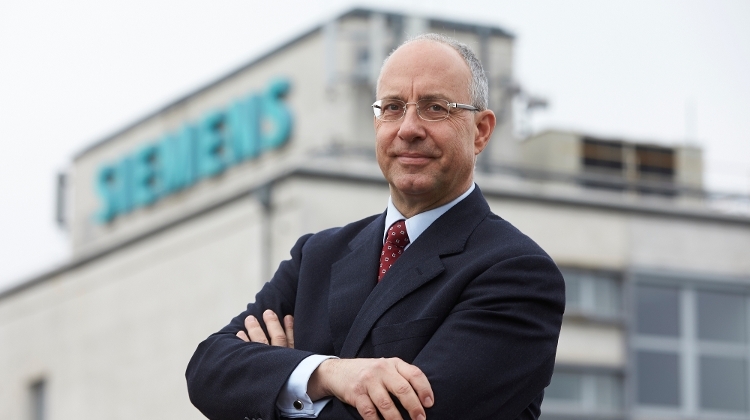 Dale A. Martin has been CEO of Siemens Zrt. since 2010. During his almost three-decade career within the Siemens Group, he was Member of the Executive Boards of subsidiaries in Europe and Asia.

After studying Chinese (Mandarin) in Taiwan, he earned a Masters degree in Social & Economic Studies from the University of Economics and Business Administration in Vienna.

He speaks German, English, Hungarian, some French and Mandarin. Before joining Siemens, he worked for AWT in Vienna from 1984, then from 1989-1991 was Deputy General Manager of AWT’s Asian joint venture in Hong Kong, covering Greater China and South Korea.

Dale A. Martin held the position of President of the German-Hungarian Chamber of Industry and Commerce (DUIHK) between 2013 and 2019 for the maximum three terms and continues to serve on its Board.

When did you arrive in Hungary and what brought you here?
As an expat I was sent here first in the early 90’s and again in 2010. I spoke some Hungarian - three of my grandparents left Hungary when they were young.

Have you ever been an expatriate elsewhere?
Besides growing up in Vienna, I lived in Taipei, Hong Kong, Tokyo and Bratislava.

Friends are in Budapest for a weekend - what must they absolutely see and do?
Visit the Várkert and take the escalators up to the castle. Walk over to “Halászbástya“and enjoy the view over the city. The Parliament is also impressive from the inside with Hungary’s crown. If you have time, indulge in the warm waters of Budapest’s historic spas.

What is never missing from your refrigerator?
Sour cream & orange marmalade.

What do you miss the most from home?
“Kaiserschmarrn”

What career other than yours would you love to pursue?
“Green architect”, because I firmly believe in sustainable solutions.

What's a job you would definitely never want?
Angler – I’m not that patient.

Where did you spend your last vacation?
The most recent short holiday was at the Balaton, staying with friends. Actually I am answering your questions from Balatonalmádi!

Where do you hope to spend your next one?
For the longer vacation we plan to go Asia in autumn.

What was your favourite band, film, or hobby as a teen?
I really enjoyed listening to “Yes” and “Renaissance”

Apart of temptation what can't you resist?
Oscar Wilde knew that this was a true challenge; however responding to e-mails quickly is very tempting.

Book or movie?
I enjoy and prefer talking to people.

Morning person or night person?
Rather evening person, but my colleagues tell me that I am both ...

Which social issue do you feel most strongly about?
Besides environmental issues, (dual) education, making people curious about the future.

Buda side or Pest side?
My wife is from Buda side...

What would you say is your personal motto?
“Time is merciless“ and don’t give up early, “try, try and try again”!