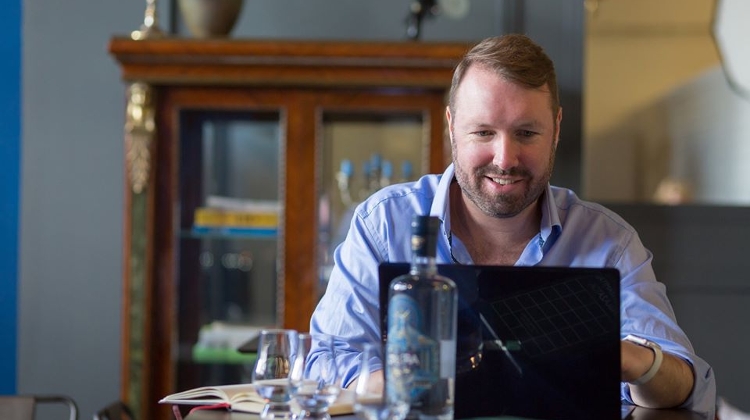 His law firm is a boutique enterprise specialised in financial regulatory law, particularly investment and capital markets law, financial and payment services law - a world away from crafting the finest local gin available.

1. Where did you grow up?
Not an easy question in my case. I was born in Germany, but my parents are Hungarian and left the country in 1979, a year before my birth. I was born in Bonn, the "federal main village" as we called it at that time. As a kid, I was raised in Munich.

When I was 14, my family moved back to Hungary. For me, it was the first time in Hungary spending more time than just a summer holiday. I graduated from the German School Budapest, and then I studied law.

In between, I spent a year in the San Francisco Bay Area (Cupertino), doing my high school freshman year there. So, being Hungarian, I still have some German (and Bavarian) roots somewhere inside me.

2. If you could be an expat anywhere in the world, where would you choose?
Actually, I was an expat when I was living here as a high school student because I went to a foreign school and my friends and classmates were mainly German or from other countries.

I love New York City, I love everything about Italy, Swiss mountains and French wine regions, but being an expat, maybe New York City. I do not know how long you can actually live there.

I'm somebody who also likes the countryside, I like nature, I like mountains, but every time I have been to Manhattan, I fell in love with the city, so that is why I think I would choose that place to be an expat.

3. What would you miss most if you moved away from Hungary?
Family and friends are always the first on the list, but what I would miss apart from that, I think food would be pretty high on the list. I love local food and also my family’s cuisine. Also, I would miss spending time with non-expat people.

Because what I usually experience is that you can have a much more in-depth conversation with people who have the same cultural background as you have and you are in within that culture. The same language is also important.

Talking with expats and spending time with them is a bit international, you look for a common thing between your cultures, it reduces a little bit the topics you talk about, the cultural impacts you have, so I think it is important to have roots somewhere, and I think that is something I would miss.

4. Friends are in Budapest for a weekend - what must they absolutely see and do?
Local food and wine – I think our wine tradition is something everybody, even if they just spend a couple of days here must understand. The history and the culture of the country is also something very interesting.

I would show them the architecture of Budapest, not something particular, just how it developed, the classic style, there is a lot of art-deco in the city, and I really like Hungarian secession - so this would be essential. I just do not know how much more we would have left from the weekend.

As for a restaurant, I like Café Kör in Sas utca for their traditional food which stays original and doesn't change.

5. What is your favourite food?
My mom’s lasagne and rakott kelkáposzta (casserole kale).

6. What is your favourite sport / form of exercise?
You mean doing or watching? Like most of us, I am a fairly busy person. I know I should do more sports. I am trying to take some time out and go running regularly.

Unfortunately, more in the gym than outside. If I am running outside, I start at Opera, where I am living, run up Andrássy, to the City Park, do a big round, and run back on Andrássy to Oktogon.

That's little longer than Margit Sziget round, which would be 5,2, this is 5,9. So that's something I try to do maybe twice per week.

I watch soccer, but not the Hungarian league. However, I sometimes go to Fradi games since my family used to be big Fradi fans, especially my Grandpa. I usually watch Champion's League and German Bundesliga.

Bayern Munich is our team, maybe even more than just our team, we also go to the stadium once a while. Also, if I can stay up late, I like to see one or the other NFL game, my dad is maybe the biggest American football expert in Hungary.

7. What is your favourite place in Hungary?
Obviously, downtown Budapest and I love the Tokaj-Hegyalja region. If I hadn't done this (Opera Gin), I would be doing wine in Tokaj.

Actually, that is where it all started, my original idea was to buy a small winery there, but then I realised gin is something maybe more unique. I usually spend at least three weekends per season there. Tokaj, for me, is a very mystical place.

I also love Káli Basin - this is something pretty recent which I found out in the last couple of years.

However, I am quite a local patriot in Budapest. There are actually often several days when I am not leaving the Király utca, Körút, Bajcsy Zsilinszky út triangle – I have my wine bars here, the cocktail bars, the restaurants, I know a lot of people who live there.

Ok, if I have to go to my office (Bank Center), I have to leave my triangle, but just a few meters and I am actually a home office person.

8. What was your inspiration to do Opera Gin?
I still work as an attorney. I worked eight years for a UK – US law firm, from 2006 until 2014. Then I started my own, small boutique firm now having five colleagues. That is something I like actually.

However, I was looking for something else as I never produced anything. There is nothing in this world where I could say: This is what I did. I mean, like a piece of furniture, a house, a poem, or a piece of music to show.

It was a big leap of faith because when we started, we had no idea what to do. We ordered this huge distilling machine, they delivered it, and showed how to turn it one. That was it – the machine has roughly 200 buttons on it.

The entire licencing procedure was also very complicated since we are the first gin distillery in the country. The authorities had no clue what to do, and then there was us, with no clues whatsoever… It took us some time to work it all out. The most challenging thing however was the recipe.

Just to give you an example. We decided to put lavender from Tihany in the gin.  Every time we added a new botanical, we didn't know if we should be calculating kilograms or grams.

So what we did, we took the lavender, put it into the maceration and when the distilling started all of Újpest smelt of lavender. Then we learnt that with Lavender it is not kilograms, but rather grams.

We received a lot of help from other distilleries from abroad, from the UK, from Germany, from the US. Everybody gave us a little hint. Nobody ever sent us a full recipe as this is something you have to find out yourself. There is no other way.

The still was delivered in February 2018. We had the first recipe around December, and we did not go to the market until February last year. Maybe almost a year was spent on testing and tasting.

The way it worked, with Laci, our Master Distiller is the following: I worked until 5pm in my office in Bank Center, giving legal advice to clients, then changing into jeans and t-shirts, coming here to the distillery. We started distilling around 7pm in the evening, finished around 3am next morning.

Then I went home, showered, had 4 hours of sleep, went to work and then came back here. It went on for almost a year. And let's not forget the spirit tasting all the time, raw gin with an above 90% alcohol. We were not drinking it but still… and of course the alcohol steam you have around you, this is a real gin distillery.

9. What's a job you would definitely never want?
Truck driver – I hate driving. It is maybe worse to be a security guard – standing around all day not doing anything.

10. Where did you spend your last vacation?
In Rome.

11. Where do you hope to spend your next one?
Scotland – because one of the best gins are made there. I am more of a Northern person than a Southern one. If you ask me classic questions like "Beach or mountain? - Mountain", "Winter or summer? - Winter". I get sunburnt very fast.

Also, I love whisky. I do not know how the food is there, some people say it is good, some say it is not so good, but I like meat, steaks, it will be fine.

12. What was your favourite band, film, or hobby as a teen?
I played the guitar when I was 15-16-17, so my favourite bands were guitar bands, like Guns N' Roses, or more classic rock bands like Led Zeppelin. I loved Queen – the first record I had was the Queen album: Wembley 86.

I listened to it for so long that the tape broke. I still listen to classics; my father introduced me to Pink Floyd and the Rolling Stones, and I also listened to these a lot. I had my electro time when I was at the end of high school and also listened to DJ's once in a while.

Movie: Very diverse, I like old Star Wars but also and Italian classics, as Fellini movies.

As for sports, I was not really a sportsman. I was on the scientific line. I read books related to astronomy. I remember, I read Stephen Hawking's book, A Brief History of Time when I was maybe 17. I wanted to become somebody who does research, but then my parents convinced me to get into law.

13. Apart from temptation, what can't you resist?
Food, wine, drinks in general, travelling. Spending money on expensive wine is maybe one of the big problems I have.

14. Red wine or white?
I have been asked about it before. Some people link it to summer or winter, but I connect it to a piece of my life. At the moment red, absolutely, but a year ago I was only drinking white wine. It is a stage in my life when I am more of a red than a white wine person.

15. Book or movie?
Movie. The last one I saw was the Chernobyl miniseries – very shocking.

16. Morning person or night person?
Night – even though I wake up early, I do not sleep too much. Mornings are a hustle, and you have the whole day in front of you, all the routine things have to be done... I love having long breakfasts on weekend days.

18. Buda or Pest side?
Pest, absolutely. When I go to Buda, I am thinking about taking my passport.

19. Which achievement in your life are you most pleased about?
The first is graduating from law school, since I did not speak really good Hungarian at the time. Since I went to a German school, we just only spoke the so-called 'kitchen' Hungarian at home, and I was really bad at writing and reading. Because of this, the first two years were really hard.

The second is maybe that I quit a big law firm and started my own business, and started doing the Opera Gin.

20. What would you say is your personal motto?
I like this: Work hard, play hard. What we do here is a lot of playing and drinking and partying, but it is also hard work.