Kristina Mladenovic, Author of 'The Promise' 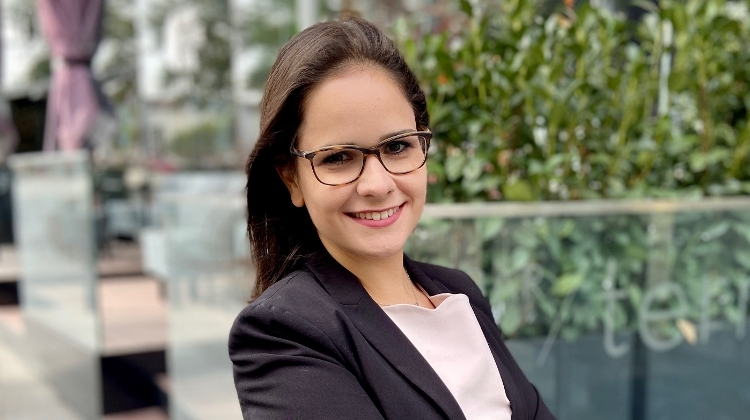 She was born in 1993 in Serbia, Novi Sad. Her family moved to Budapest, Hungary in 1999. Even since then, her home is actually Hungary. She went to an international school in Budapest, where she got to know a lot of interesting people, as well as life time friends.

After she joined the Budapest Business School where she studied economics, she specialized in Hotel Management. Since the last day of university she started climbing the career ladder in Hotel business.

Kristina’s heart belongs to Hospitality, but mostly revenue management. However sometimes it’s good to relax, where she finds her peace in writing. As you see there are a lot of cultures and interesting things that brought her from one place to the other.

Her emotions and thoughts were always in writing. After a lot of short stories, poems, speeches, Kristina have decided to publish her first book, The Promise.

She didn't have the courage to make it public, and wanted to hide her face and name from it as she felt scared, but she passed that problem and realized she should be more proud, as how many people could say that next to a full time successful job they could find the time and the courage to write a book.


1. When did you arrive in Hungary and what brought you here?
My family and I arrived in Hungary in 1999. Due to the Yugoslavian war. My family didn't want my brother and me growing up in a war zone, so from one day to another we packed and moved our lives to Budapest. I don't even remember it, as I was too small, but whenever I asked my mother about it, I could see tears in her eyes.

2. Have you ever been an expatriate elsewhere?
I lived 6 months in Berlin, during my university years, as I did my internship in one of the best hotels in Germany, Hotel Adlon Kempinski. It was a different experience then living in Budapest, where you are more welcomed. The atmosphere of the city is very hypster and most of my days were spent with a lot of work.

3. What surprised you most about Hungary?
The amuont of fat and salt they put in food, but they somehow still don't have that much obese people.

4. Friends are in Budapest for a weekend - what must they absolutely see and do?
I would definitely rent a bike (or even walk the distance) to go and see Parliament, St. Stephen's Basilica and Castle Hill. In the evenings I would take them to the rooftops in Budapest, one of my favorites is the one on top of Parlament Hotel (Intermezzo Bar). It is not that touristy and has a fantastic view. On one day, instead of drinking we would go to one of the thermal baths, which would be Rudas in my case, as I absolutely love the outside pool on the top. Even in winter, when you are freezing, it is such a great experience.

5. What is your favourite Hungarian food?
Gulyás soup with cheese Pogácsa. I love it when they bring it in a bread in the restaurant, or how my fianceé makes it. It is his specialty and one of the best I tried.

6. What is never missing from your refrigerator?
Cheese. Even if we go on a trip, there is always cheese packed away or even in the freezer. Why? Because there is no better snack than some cheese. It goes with everything and I could eat it anytime.

7. What is your favourite Hungarian word?
Szia. It sounds like a little cat saying "Meow", quite nice and friendly. Most of the other words are more aggressive and complicated.

8. What do you miss most from home?
My dad. Before my parents divorced, he already started to live more there then with us. Afterwards he stayed there and never came back. I think if he wouldn't be in Hungary we would be closer.

9. What career other than yours would you love to pursue?
I am actually in the hotel business. To be more precise in Revenue and Reservations as one of the heads of the department. However, writing is another passion, which I just started to experience. Who knows, if it will go well, maybe I will be the next J.K. Rowling.

10. What's a job you would definitely never want?
Sales. I am not good at faking emotions and selling something I don't truly believe in. There are a lot of sales people, with whom I worked who could put on a face and sell everything, but that is not me. If I feel that a product or a company is not good, then I would not be able to sell it. I am too honest and would probably say all the wrong things to somebody just not to buy it.

11. Where did you spend your last vacation?
My fianceé and I went for a road trip through Austria, then we went to see Switzerland (Zürich, Lucerne, Bodensee, Zug). From there we went to Germany to see a few castles near the border and then stopped at Munich. From Munich we went back to Vienna and the next day to Budapest. It was around 3.500 km with a car, but was definitely worth it. We saw beautiful places and had a very nice time.

12. Where do you hope to spend your next holiday?
Skiing season is coming, so somewhere on a mountain covered in snow, but that is more a long weekend than a holiday. The real holiday, if the current world situation would let me, would be our honeymoon next year in August or September. We are planning to go to South America, or to Asia. The exact destination is unknown, but both of us know we need to get far away from reality to really relax.

13. Apart of temptation what can't you resist?
Chocolate, or actually any kind of sweets. Growing up I never had a sweet tooth, but when I got around 20 it started. I would eat anything that is sweet all day, but my sensitive stomach won't let me. In addition, I am trying to look out for my figure.

14. What was your favourite band, film, or hobby as a teen?
I was a huge Backstreet boys, Blue and Westlife fan. I could hear them all the time. Even had their CD in the car, which my mom and I listened to all the time if it was the two of us. I don't remember having a favorite film, I just love watching movies. Except for horror movies, I am into everything. Hobby was always changing for me, as I followed my brother in everything. If he wanted to go fencing, we went fencing. If he wanted to play football, we played football. I think I could say, my favorite hobby is my brother and everything I could do with him.

15. Red wine or white?
Red wine, because it goes well with cheese.

16. Book or movie?
Depends. I have a month where I read 10 books in a month and nothing else. There are days I just have a "Netflix and chill" marathon.

17. Morning person or night person?
Definitely a night person. Morning is for sleeping. When I worked in shifts at the beginning of my hotel career I had to wake up at 3 or 4 am. I did it and I was never late, but when I got home, I was sleeping 3 hours as soon as I reached my bed.

18. Which social issue do you feel most strongly about?
Discrimination. I never like it in any form. If it was related to racism, gender, sex, nationality or power. There are a lot of people all around the world, who don't have respect for another human and try to find a reason to lower them and discriminate against them in society. As an expat, I have seen first hand how it feels to be an outsider and called names, when you don't speak the language. To push yourself to your limits or even beyond as a woman in a managing role, to show man in power that you are equal. To have friends afraid of their sexual orientation and keeping it secret, because they know, they will be handled differently. We all still have a lot to grow, we are humans and make mistakes, but being mean to another person for bad reasons is not acceptable.

19. Buda or Pest side?
I grew up on the Pest side and I loved it always, but maybe if I had a family and wanted to have a nice garden with a house, it would be Buda.