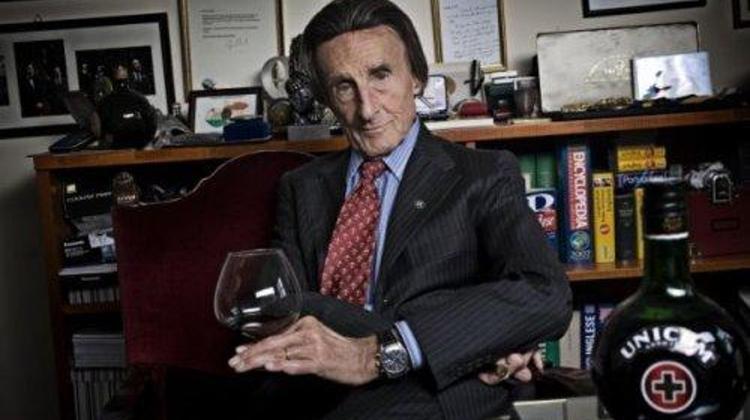 Péter János Zwack, born in Budapest on 21 May 1927, passed away on 5 August 2012 in Italy. According to Italian papers, he was at Venturina thermal bath near Livorno where he suddenly felt ill, collapsed, and despite all efforts they could not save his life. A businessman and diplomat - former Hungarian Ambassador to the United States between 1990 and 1991 - Péter Zwack was superb ambassador for Hungary. Our thoughts are with his widow Anne, all his children and wider family. Iris Masters Zwack commented, "My illustrious father, died on Sunday leaving a great silence in his space. He was at peace.".

The video above includes an interview with Peter Zwack, which begins at 23:50.

Peter Zwack was proud to have been born in Budapest, where he finished high school, before being forced to flee the country in 1948. He subsequently continued with his studies in Milan and then in New York at the faculty of economics.

Until 1970 he lived in the U.S., becoming an American citizen. In 1970 he returned to Europe and lived in Florence, where he managed the production and international distribution of Zwack Unicum. He also launched a line of fruit liqueurs.

In 1987 he returned to Hungary for good. In 1989 with his partner Emil Underberg he formed a Joint Venture with the Budapest Liqueur Industry Company. In 1990 he was consequently appointed the first democratic Ambassador of the Republic of Hungary to the U.S.A since the fall of the Berlin Wall. In doing so, Peter Zwack had to give up his American citizenship becoming a Hungarian citizen once again.

From his first marriage Peter Zwack has five children, living in the United States.

In 1991, he returned to Hungary and, as the Peter Zwack and Consorten AG, won the privatization tender to purchase the Budapest Liqueur Industry Company, thus becoming the largest liqueur and spirit manufacturer and distributor in Hungary.

Peter Zwack had been planning this step for some time to ensure that continuity and the family tradition be carried on into the sixth generation.

Peter Zwack was a Member of the Parliament between 1994-1998, he was elected in 1994 as the only independent MP to the Hungarian parliament for the town of Kecskemet.

* In 1999 he became Cavaliere dell’Ordine di Merito della Repubblica Italiana.
* In 2005 he received the Governor’s Cross of the Republic of Hungary (Civil).
* In 2008 he became Honorary Citizen of Budapest.

Follow this link for a recent interview with him on XpatLoop.com published on 06.07.2012.