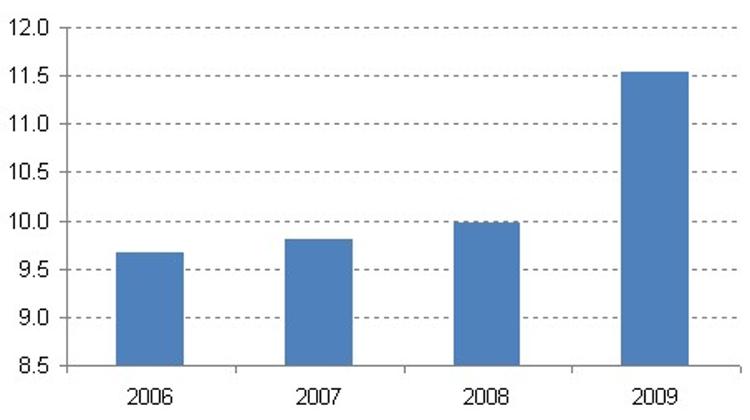 "How has the economic crisis changed movie-going patterns in Hungary? How come multiplex movie theatres are more successful in Slovakia than in Hungary? How can cinema operators keep audience numbers up in the age of torrent sites and affordable home theatre systems? Is 3D really the key to survival? Portfolio.hu has addressed these questions and more in an interview with V.J. Maury, Chief Executive Officer and founder of Palace Cinemas, the market leader in Hungary.

Portfolio.hu: Cinema City has recently published its 2009 admission results, which were above the expectations. They managed to increase the number of admissions by 20% in CEE. How did you manage in 2009?

V. J. Maury: We did not open any new sites during 2009, which may have accounted for some of the admission growth in case of Cinema City. Basically we had some ups and downs during last year. In terms of admission we experienced a slight decrease, while in terms of revenues we managed to grow compared to the previous year.

Overall, we had a better year than we had expected at the beginning of 2009, given the unfortunate economic context in our markets. In Hungary we had a peak in terms of performance in 2004, and the cinema industry has not returned to that level since. The 2009 growth of the Budapest came from new openings (Arena Pláza, Allee) which is a positive trend. These new opening only increased the size of the pie in Budapest.

Portfolio.hu: How was 2009 for the global cinema industry?

V. J. Maury: It really boils down to the movies. The exhibition business is cyclical in a way that in about every 4-5 years we experience a remarkably weak year, which can be explained by the quality of movies released in that given year. In the United States, 2005 was such a year; audiences did not like the released films in that year. I think this year was 2009 in Central Europe; the so called blockbusters did not perform as well as they did in 2008.

Portfolio.hu: There are different views on the relationship between economic growth and admission numbers. Some say more people tend to go to the cinema during recession, as it is still a relatively cheap way of entertainment. What is your view on this issue?

V. J. Maury: I believe that people in Hungary still consider cinema as a very cost effective choice of entertainment given the circumstances. Accordingly, we are trying to keep our price levels relatively low and so our ticket prices in Hungary have not increased as much as they have in the Czech Republic and in Slovakia.

I think the relationship between the state of the economy and people’s willingness to go to the movies is similar to the situation with the weather. On one hand, there is a certain range, within which relatively bad weather results in increasing number of visitors.

On the other hand, if weather gets worse than this range then it has the opposite effect. Our bigger problem in Hungary is the increasingly onerous local and national taxation on our business. If we had the admissions performance in Hungary with the tax structure in the Czech Republic or Slovakia, we would be very profitable.

Instead, decisions to raise VAT from 20% to 25% simply raised the prices for our customers in the midst of an economic without any benefit for Palace. This is a tough pill to swallow in the midst of the economic downturn we are experiencing. If this situation continues, businesses may be hard pressed to have a good reason to be here.

Portfolio.hu: Which countries did in Central Europe fare the best during 2008-2009?

V. J. Maury: We’ve had some disappointment in the Czech Republic, mostly because some of the local movies did not work as well as they had in the past. However, we believe in the Czech movies: we are opening two new sites in 2010, and an additional one in 2011.

In 2009, Slovakia was our hottest market in Central Europe. There were fears that the introduction of the euro would result in decreasing demand but actually quite the contrary has happened. We are also expanding in Slovakia, planning to open a new site in Bratislava this year.

Portfolio.hu: Do you have expansion plans in any of the other countries in CEE?

V. J. Maury: We are looking at these markets. We have not stopped our expansion. When we consider launching into a new market, we want to do it with more than one site. We are constantly looking at the opportunities. However, the economic situation is not favourable for acquisitions or expansion at the moment.

We are opening a new site at the Eurovea shopping center in late March in Bratislava and then another at a M-Corp developed shopping center in Usti nad labem in the Czech Republic in April and in Liberec in September. We have another in the pipeline at the Karolina development in Ostrava for early 2011.

Portfolio.hu: The IMAX theatre in Budapest has been fully booked since the launch of Avatar. Is it the beginning of a new era with more and more 3D movies or is Avatar just an exceptional movie? Do you see potential in 3D movies?

V. J. Maury: Avatar is a great movie and we experienced great results at our six 3D screens in Budapest. Palace Cinemas is heavily committed to 3D digital using the Masterimage and Real D systems, the best technology in the market. The future of the cinema business is in digital technology. We bought the first digital projector in 2002 because we have always believed that it offers a great deal of opportunities. For instance you cannot show new 3D movies without digital projectors. We believe that 3D is an increasingly important business line in the cinema industry.

In 2009 around 10-12% of our revenues came from 3D movies, while we only had 13 movies of that kind. At the end of the day, I do not think that 3D will completely dominate our business in the future, but it definitely will become a big part of it, simply because it works very well for certain kind of films, especially for computer generated movies like Avatar, Toy Story, etc.

Digital also enables us to manage different kind of projects, like playing live concerts, sport games in our cinemas, which will never be our core business, but it helps to reach more customers. Also, small filmmakers can get a much bigger exposure, since making movies in digital is much cheaper than on film. Therefore our intention is to become completely digital within two years."