Depreciation Of Hungary's Forint On The Horizon 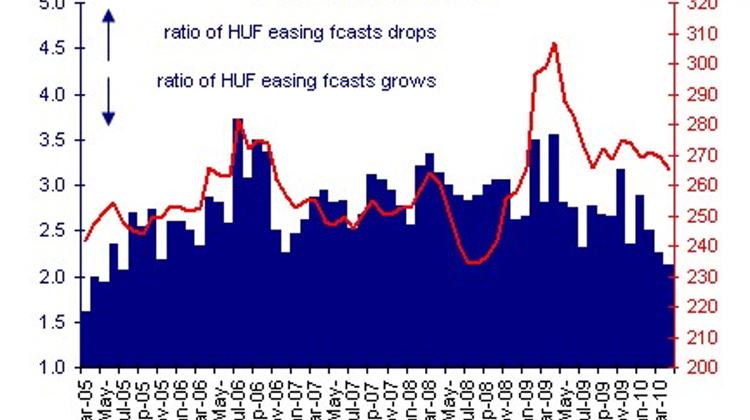 The HUF’s 12-m prospects have even worsened since our latest survey, according to the respondents’ estimates. Hungarian government securities yields are likely to rise in the months to come, the fund managers projected. As a result, the ratio of those in overweight positions in HGBs relative to their own benchmark has risen since our previous poll.

Amidst positive investor sentiment nothing could rock the forint that has firmed to new highs in March, stepping out of the range it has been confined to for months. By the end of March, however, the EUR/HUF exchange rate eased back to around 265.20, which had previously proved to be a strong support. From this reference value, the most likely scenario is HUF weakening, according to the fund managers.

In Portfolio.hu’s latest monthly poll, 56% of the respondents projected the forint to be at 2-5% weaker than the reference level three months from now. This means the majority remains pessimistic about the HUF’s short-term prospects, but now a fewer of them are of this viewpoint than a month ago. As a result, the camp of those forecasting HUF stagnation has widened.

A sweeping majority of the respondents (76%) see the forint weaker by more than 2% a year from now. Still none of the fund managers expect EUR/HUF at stronger levels than the 265.20 reference value on this horizon. Comprising all the estimates in a single indicator we find that the fund managers’ 12-m outlook on the forint has been worsening as the forint was gaining strength.

In March, government securities yields dropped further. In view of that, most of the fund managers contributing to our poll (69%) expect the MAX index to be +/-2% away from the reference value three months from now, which practically means stagnation. We need to note, however, that a few respondents are currently more upbeat about Hungarian yields than a month ago.

With regard to the longer-term outlook on the FI market, a large majority of the fund managers project yield to be lower a year from now, but the general view has not changed since the early-March poll. The aggregate indicator shows that as yields have been coming lower since last summer, fund managers have been turning increasingly pessimistic about the prospects of the MAX index. But the overall prognosis has not changed markedly over the past few months.

The camp of those in overweight positions on HGBs relative to their own benchmark has grown since our last poll (at the expense of 'market weighters’), but this is what led to a balance, with 38% of the respondents being 'overweight’, the same as the ratio of 'underweighters’.