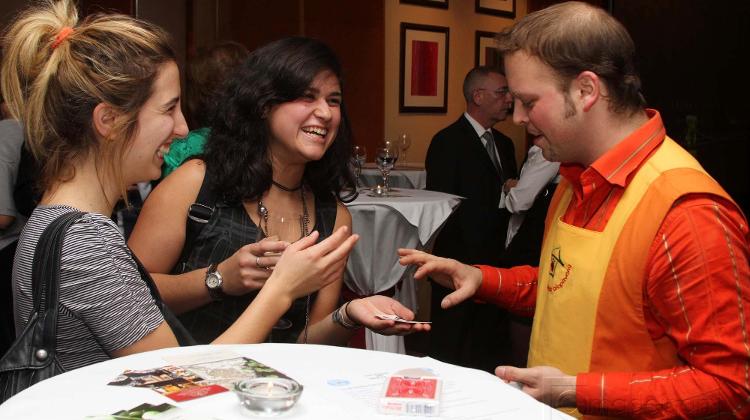 The international community in Hungary came together last Friday to raise HUF 1.5 million for charity - over twice the amount donated on the 5th of November last year. <br><br>Stephen Linfitt, the event organizer, took the occasion of the 10th anniversary of XpatLoop.com as an opportunity to have fun and raise funds for The Smiling Hospital.<br><br> Over 250 people attended, including many distinguished locals, ministry officials, and media personalities. Expats of many nationalities; including several ambassadors; senior diplomats; leading business figures; and a variety of socialites all joined-in.

Click here to see more of what happened and who attended

The InterContinental Budapest Hotel, situated in the heart of the Hungarian capital next to the Danube, sponsored the venue to provide guests with a five-star view of the Royal Castle, and the iconic Chain Bridge - the focus of the evening's PowerPoint presentation, symbolising the united nature of the expat community in Budapest for this annual event.

Entertainment included two live bands, The Rorschach Band, and The Random Chocolates, along with musicians and a magician from the Smiling Hospital team to demonstrate how the foundation brings cheer to the lives of ill Hungarian children.

Quality Hungarian Red and white wine, plus fine whisky all went down well. As did the five-star menu generously served up by the hotel, showcasing many British classics such as meat pies and fish & chips, as well as healthier savoury choices, and a range of fabulous deserts including a giant 10th birthday cake presented to XpatLoop.com complete with firework decorations.

The evening also featured a fireworks display film to mark the annual British occasion of Guy Fawkes’ Night. A virtual bonfire burned brightly all evening and a live ‘bonfire wood-cutting competition' offered guests an enjoyable challenge with prizes from the hotel. Table football fun, and Sony PlayStation Move consoles also proved popular in the games corner of the venue.

Fund-raising came in the form of donations given at the entrance, live and silent auctions, and a name card draw with many valuable gifts, such as an Exclusive Ferrari Driving Package, all of which created excitement and many happy winners. As a fond farewell, all guests were given a prize worth HUF 27.000 from madeinart.hu.

Feedback from guests and the major sponsors of the event was more positive than ever. Mathieu van Alphen, GM of the hotel, “Lets do it again next year! Stephen Linfitt and I have the common interest in the good work this foundation is doing in Hungary. " Matt Foster of REED Specialist Recruitment said at the close of the party, “Once again a fantastic evening, surpassing even last year's. Looking forward to playing a good role next year too."

President of the Foundation, Dr. Albert Royaards, together with Countess Éva Csáky Bornemisza, its Founder, expressed their delight at the result of the event, both in terms of smiles raised and the generosity of guests, especially given the current economic climate. They confirmed the donation covers more than one month of their charitable activities in 23 hospitals around Hungary.

"This is, for our humble standards, a huge amount," said Dr. Royaards, ”Countess Éva, Stephen and I thank in unison everyone involved with the event. United together we all helped bring smiles to sick children in Hungary. Happiness Helps Healing is our motto, and that goes double for this event!”.

Greg Dorey, The British Ambassador to Hungary, made a special virtual appearance via a video link, in which he praised the work of the foundation, and XpatLoop.com for supporting the cause for the third consecutive year. He coordinated with Jamie Banks of the British Embassy in Budapest who was at the event  to make a speech about the history of Guy Fawkes’ Night.

Robert Milders, the Dutch Ambassador to Hungary, attended as a guest of honour, and summarised the event as, ”A great success!”. In a follow-up letter he wrote, "I was impressed with the high turnout, which clearly shows that XpatLoop.com is a vibrant organization, capable of mobilising a large and mixed group of people to attend a well organised event.. This is clearly a winning formula which no doubt helped the 'Smiling Hospital Foundation' achieve a record result of financial support from your event. Equally important to note is the great amount of useful information that your website provides."