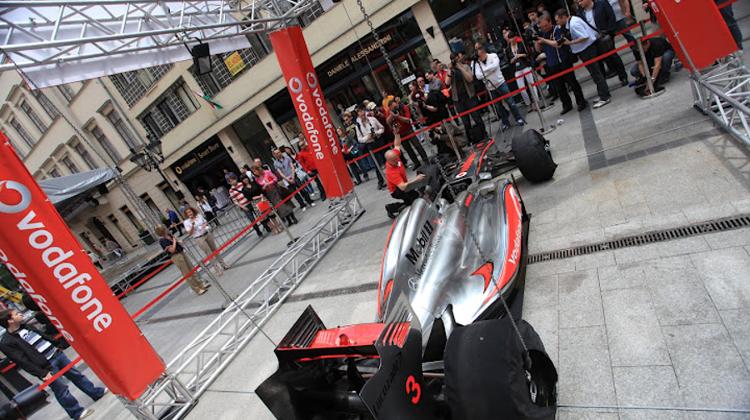 Vodafone Hungary is celebrating the renewal of its mobile network by bringing Formula 1 world champion Jenson Button to race in Budapest. This showcase event on 1 May is part of a four-day festival in downtown Budapest to encourage an expected audience of thousands to 'start something new.' The following video shows Jenson Button racing through the streets of Manchester last year in a Vodafone McLaren Mercedes F1 car.

1 May 2012 will see British racing star Button in action along Bajcsy-Zsilinyszky út in Budapest, possibly reaching a speed of 200 km/h and setting a new record. Click here to watch live as Jenson drives at speed through the streets of the Hungarian capital at 1:30pm CET.

Organisers say a children’s dancing group from Debrecen will perform at the opening ceremony of the Vodafone Downtown Grand Prix before Button will make his first run on the 1.6km street course.

The newly surfaced Hungarian roads will enable Jenson to safely demonstrate the performance of his Vodafone McLaren Mercedes car in this urban environment.

After three runs on the street course, the world champion has media engagements with the likes of Sky News. XpatLoop.com are invited too but are unable to attend this particular PR stunt for Vodafone, which will also see Button meet the Hungarian Olympic water polo team and try out a Vodapolo smartphone app.

“Trying to throw a goal with the help of the Vodapolo application with the Hungarian National Waterpolo team members will also be interesting. It seems that, like the other visitors to the Raise Your Game Weekend, I’ll also be trying something new,” Jenson is quoted as saying.

Throughout the weekend on Fashion Street in downtown Budapest, event attendees will have the chance to sit in a Formula 1 car, see a pit-stop style tyre change, and play a F1 racing game.

Map of the race track (text only in Hungarian)