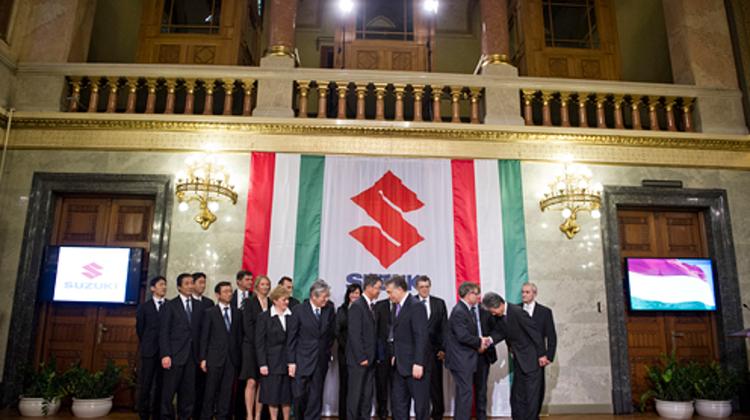 The Hungarian Government signed a strategic partnership agreement with the local unit of the Japanese automobile manufacturer Suzuki on 21 November.

In a speech delivered at the signing ceremony in the Hungarian Parliament, Prime Minister Viktor Orbán assured of Hungary’s unbroken support to the free trade agreement signed between the European Union and Japan. He stressed that the Hungarian Suzuki plant was of particular significance for the country since after the fall of communism, it has contributed to the integration of the Hungarian economy into the new world economic order. He also informed that as a result of the Government’s successful negotiations in Japan, Japanese investors may come to Hungary in the upcoming one or two years.

The Prime Minister has also announced that on the initiative of the Japanese company, the bridge connecting Slovakia with Hungary in Komárom will be widened, which will help accommodate deliveries to the Suzuki's plant based in Esztergom. Viktor Orbán put forward that the Government had also decided to build a connection between the city and the Hungarian M1 motorway.

Hungarian Suzuki Ltd. Chief Executive Officer Hisashi Takeuchi said at the ceremony that Suzuki wished to give further impetus to Hungarian economic growth and plans are envisaged for the creation of a new model within the framework of a 2 milliard euros investment.

The Government is committed to creating an investment-friendly environment for international companies. With such an aim, similar agreements has been signed with industrial giants like Coca-Cola, pharmaceutical firm Gedeon Richter, aluminium company Alcoa-Kofem and German car manufacturer Daimler. Furthermore, the Parliament’s recently adopted legislation on the setting up of priority areas eligible for tax relief for investments also serves this endeavour.