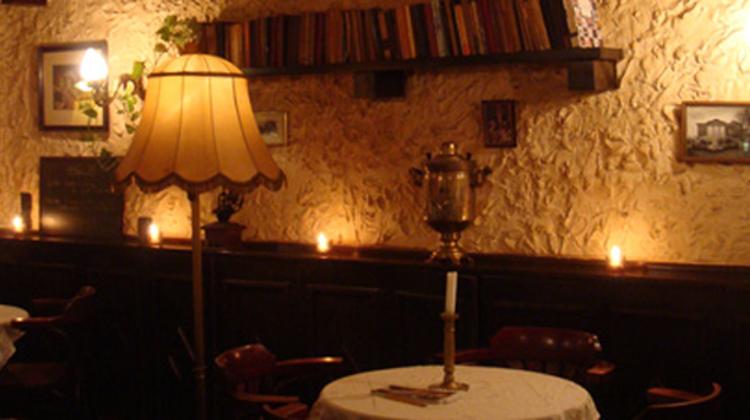 While the maxim "There's nothing much in Buda" holds some water, it usually pours out of the mouths of Pest-dwellers who get queezy every time they get too close to the river. This is a result of budaphobia, which sets in as soon as you start renting a flat in the fifth, sixth, seventh or eighth district. The budaphobe deletes all knowledge of Buda from the memory. They don’t know where Batthyány tér is, or think it's the airport which serves Balaton.

Three tramstops from Astoria then is beyond the conceptual boundary of almost everyone I know. Yet I found myself there, stepping out into a light rain; into an afternoon ended prematurely by darkness.

Buda-folk, bowed-down and bent, scuttled through the shadows, silhouetted, intermittently, by headlights reflected in the road. So this was life in the forbidden zone... or simply the tail end of winter. Whichever, some kind of sanctuary was clearly needed. A part-opened window cast enough light onto Bercsényi utca to suggest I might find it there.

Entering Café Ponyvaregény is like wrapping yourself in a huge quilt; the walls and ceiling look like they’re made of meringue and they have a cosying effect. Like all the best traditional cafes, newspapers (Hungarian only) hang from “carpet-beaters”, which in turn dangle from a hatstand. High shelves are laden with books, not exclusively Magyar: an English copy of Hesse’s Steppenwolf caught my eye.

On a Sunday afternoon, 'bustling' would be overstating it, but Ponyvaregény was mumbling and murmuring away very comfortably. The Scrabble and Catan (don't ask me!) were enjoying time off the shelf, and elsewhere, pencils scribbled busily on the sketchbooks that lie provocatively on every table. (Someone had drawn a cowboy in mine.)

With rétes and focaccia available if you get a little peckish, efficient service (if a little formal), reasonable prices and free Wifi, Café Ponyvaregény is a practical choice too.

A pretty flash website is further proof that the owners are no Buda hillbillies, and reveals that they also have a restaurant of the same name in the up-and-coming Kopaszi Gát park, south of Lágymányosi híd. While the café on Bercsényi utca is most definitely a winter retreat, it would seem that they have summer covered too. And it's also in Buda!

So budaphobes take note: Pest may have so much charisma that you overlook her quieter, prettier sister but places like Ponyvaregény show that she has a personality too. Go on, give her a try. When you get back home to Pest, you can always say you were working late.

By Andy Sz. republished on XpatLoop.com with permission.