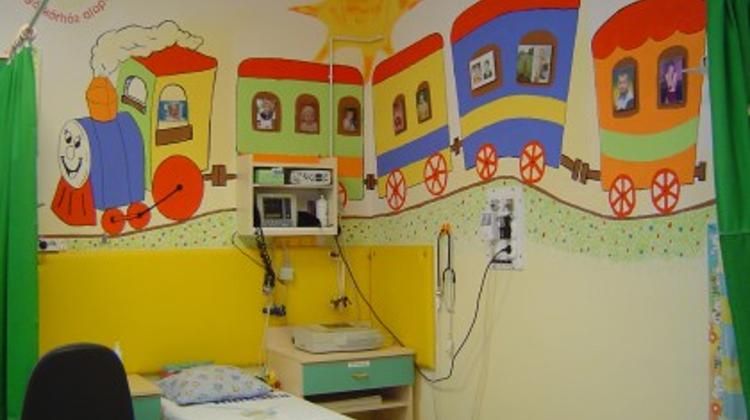 In April of 2013 Hungarian artists will be painting colourful and cheerful pictures on the walls of the Démétér-house paediatrics department on the territory of Szent László Hospital in Budapest to make children who have to stay at the hospital during their medical treatment happier. This action was announced at a conference today by His Excellency Mr Jean-Francois Paroz, the Ambassador of Switzerland in Hungary and Dr. Albert Royaards, founder and board chairman of the Smiling Hospital Foundation.

The project is being financed from the Twinning and Partnership Block Grant within the framework of the Swiss-Hungarian Cooperation Programme under the supervision of Nándor Csepreghy, the Deputy State Secretary Responsible for Development Programmes of The Ministry of National Development. The project will be realised with the partnership of experts from the Swiss Anouk Foundation. The Small Project Implementation Agreement was signed on 4 July 2012 and the project’s planned closing date is 1 July 2013.

A special, spontaneous piece of art prepared by children, which has also been hand-printed by among others Mr Jean-Francois Paroz, Dr. Albert Royaards and Countess Éva Csáky-Bornemissza, founder of the Smiling Hospital Foundation, was presented at the conference.

The Deputy State Secretary welcomed the initiative and expressed his hope that such charitable projects would be realised in the future as well.

The European Commission and Switzerland signed a bilateral agreement on 27 February 2006 regarding the Swiss Contribution established by the Swiss government. In accordance with the Agreement, Switzerland shall provide non-reimbursable funding totalling CHF 1 billion (HUF 240.75 billion) over a 5-year period to the ten new Member States who joined to the EU in 2004. Hungary has received funding of 130,738 million Swiss Francs (31,475 billion Hungarian forints) within the framework of the programme.

During the programme, a total of 32 individual projects, 2 block grants, 1 Swiss scholarship programme and 1 venture capital fund were approved. All the projects must be realized by June 2017.