Audi Launches Production At Its New Plant In Győr, Hungary 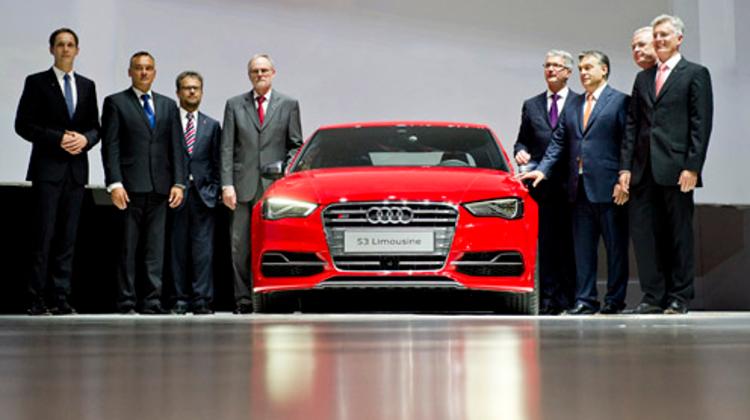 Production has started in the new, EUR 900 million Audi plant in Győr, Northwest Hungary. The inauguration ceremony was attended by Prime Minister Viktor Orbán, who stressed the role of the German car manufacturer in boosting Hungary’s importance as a regional automotive industry centre. The company’s CEO called the Győr plant one of the pillars of Audi’s growth.

The new Győr headquarters of Audi, which is now capable of performing the full vehicle production process, have begun operations. The brand new A3 Limousine will be made in this plant, the foundation stone of which was laid in 2011.

Thanks to the project, the company could increase its vehicle production to 125 thousand annually, compared to 33500 in 2012. The investment is worth a total of EUR 900 million, and the number of staff, with additional employees recruited in recent months, has risen to nearly 9200.

The Prime Minister called Audi’s role in Hungary becoming the region’s car manufacturing centre determinative. As a result of the investment, 2100 new jobs will be created, and in addition, through suppliers, Audi will indirectly create jobs for a further 15 thousand people. He also highlighted that the positive effects of the country's new economic policy are already noticeable; the Hungarian economy is performing better.

The Government’s objective is to ensure that the greatest possible number of the car manufacturing industry's 21st century high-quality products will be made in Hungary. Audi has become a significant partner in this endeavour, the Prime Minister stated. He expressed his gratitude for Audi’s contributions to helping victims of the current floods.

Rupert Stadler, General Manager of Audi AG, noted that Audi Hungaria had become a strategic pillar of the company and that the Győr plant is one of the engines of Audi’s growth, adding that in the 1990’s, the Northwest Hungarian city was selected out of 180 potential locations due to its ideal conditions.

The Győr plant was chosen to be the site of the new factory since it could develop rapidly in terms of production capacity and innovation, Thomas Faustmann, Managing Director of Audi’s Hungarian subsidiary said. He stressed that the A3 limousine will be the first Audi model to be entirely manufactured and assembled in Győr. In addition to the recently inaugurated new production site, Audi Hungary also boasts the world’s largest engine factory.

A number of further projects are connected to Audi’s expansion. Győr-Pér International Airport, serving mainly Audi, will be developed with a budget of HUF 2 billion (EUR 6.7 million) and the construction of Audi’s logistic park, worth EUR 30-35 million, will be finished in the summer of 2013. Moreover, Audi has numerous new suppliers and expanded premises in the region.

In February 2013, the Government concluded a Strategic Partnership Agreement with Audi Hungaria Motor Ltd. in view of its key role in Hungary’s economic performance, GDP and employment, and its intention to develop its business presence in Hungary.