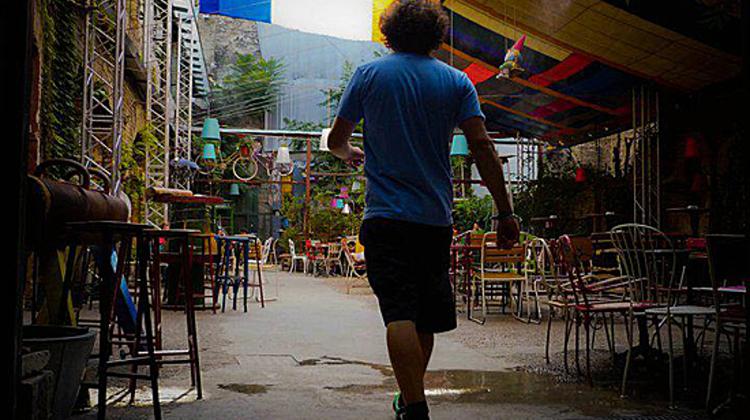 The phenomena of 'ruin pubs' took hold of the Budapest nightlife scene a few years back. Today, many of the best placed to hang-out in the Hungarian capital feature psychedelic interiors, worn-out furniture, and groups of hipsters. The best of this bunch manage to create a special kind of charm, very unique to Budapest. As not all are as well known as Szimpla Kert and Instant, here's virtual look at other such great venues, including: Anker’t, Grandio, Kőleves Kert, Mika Tivadar, Kertem, plus an honorable mention for Púder, along with a related video.

Szimpla Kert, situated in Kazinczy utca, one of the busiest party streets of downtown Budapest, is the mother of all ruin pubs. The interior, courtesy of contemporary artists, looks like as if it was put together from the selection of a second hand shop selling electronic devices, prehistoric toys, old bikes, and even vintage Russian cars. Szimpla’s crowd is mostly made up of foreigners, although Hungarians also frequent the place due to the diverse selection of concerts. The booze assortment holds no surprises, while the menu consists of bar dishes. Perfect place to get to know heaps of exciting people during an all-nighter.

Although it might seem like Szimpla Café is the little brother of Szimpla Kert, looks are once again deceiving: the former inspired the latter, and thus served as the first step on the path of success for these trendsetting drinkeries. Szimpla Café offers the same vibe and atmosphere as Szimpla Kert, although, due to the space being significantly smaller, the lack of a garden, and the zigzaggy cellar, it is rather romantic and homely. If you’d like to impress your date, or would just throw in a coffee while reading a book, you’ve just found the ideal scene!

Anker’t, the summer version of Anker Klub, is the largest garden bar in downtown Budapest. Housed by the enormous building of a former factory, it is characterized by a minimalist interior, and is made up of huge, connecting courtyards. The first courtyard gives home to a mile-long counter suited for socializing and crowd-scanning, and also a separated dance floor to do the moonwalk like Michael Jackson. The rest of the courtyards were made for chilling, chatting, and even playing sand soccer on a rarely-seen urban beach. Unfortunately, the latter comes without a sea, though, following a few shots and beers, you can just imagine that for yourself. Don’t miss out on the tasty grill dishes!

Dürer Kert has become one of the most renowned party spots during the last couple of years, housing bands and musicians such as Rise Against or Chuck Regan. Due to its youthful, friendly atmosphere, Dürer attracts the urban youth like Mick Jagger attracts women, mainly because of its diverse genre-palette and its gravelly garden suited for world-changing chats over a few beers. Concerts are also held on the garden stage, so you can basically dance wherever you want to. The only disadvantage we can mention regarding Dürer Kert is its location, since it is quite far away from the downtown area.

Not so surprisingly, Ellátó Kert is located in Kazinczy utca, right at the Drinking District’s never-resting heart. The regular crowd is made up of twentysomethings, thirtysomethings, bikers, skaters, tattooed musicians, pierced chicks, and dogs coming in all shapes and sizes. Spicy-hot Mexican dishes satisfy your post-booze hunger, which will surely strike down upon you with furious anger on Fridays, when there’s a huge beer discount. To literally top it all off, Ellátó is roofed during the winter months.

Don’t let the name (Fogas Ház means House of Teeth) fool you, this ruin pub-pioneer has no relation whatsoever to vampire flicks. During its initial years, Fogas Ház functioned as a hub for arts and a gathering place for contemporary artists. After having been rebuilt in the fall of 2010, the altered concept and the revamped design resulted in a major popularity spurt. The interior is stylishly dilapidated, the prices are not too high, and the dance floor cures your boogie-fever. Don’t dare to leave without having a slice of Margarita pizza!

Located in Nagymező utca – also known as the Broadway of Pest -, a beloved spot of party animals, Instant is a T-Rex-sized ruin pub complex occupying a whole building. The thematized dance floors guarantee that you will find the songs you’d like to shake it to like a Polaroid picture, while multiple counters and an awesome crowd ensure that you won’t leave either sober or before sunrise. The psychedelic interior features highlights such as a boar-shaped disco ball, glowing butterflies, and humping foxes.

Grandio is an urban jungle full of plants and crazy foreigners, and also serves as a party hostel. Despite the chilled vibe, it is a regular scene of wild all-nighters where anything can happen. You can quench your thirst with the usual drinks, while your groaning belly is silenced by grill dishes. Although the place has a Mediterranean feel to it, it’s not low-key at all, and the vibe urges you to release your inner rock star.

Király utca’s Kuplung is a real curiosity and an underground shrine. Hidden by a gateway right next to Ceasar’s Pub, it is housed by an old courtyard, which used to be covered with graffitis and other mind-boggling pieces of urban art. After the whole spot has been renovated and refurbished, the underground vibe and the urban art-infusion still remained intact, but was sprinkled with pieces of trendy-ish furniture and minimalist design elements. Drink discounts are aplenty, just as football game broadcasts, parties, and people of all styles and ages.

Kőleves (stone soup, which might not be that tasty), situated on the corner of Dob utca and Kazinczy utca, provides a silent snug among the hustling and bustling venues of the Drinking District. It looks like a dime-a-dozen, though homely restaurant, but it’s spiced up by a garden hiding right behind it. Colored chairs, metal tables, romancing couples, and chatting university students characterize this gravelled garden bar.

For the sake of versatility, the brains behind Mika Tivadar decided to establish their alcohol-cosuming, night-twisting, open-air institution in the favourite street of pub-hoppers, Kazinczy utca. Not that they had any other option, since the garden is right next to Mika Tivadar Pub, a den of delicious drinks, arts, and culture. As for the garden, you can gobble yummy grill dishes, and have a good time with the urban youth.

The name (csendes társ means silent companion) says it all. Located at the entrance of Károlyi Kert, an urban garden frequented by class-skipping university students and kids from nearby kindergartens, Csendes Társ is a chilled café at day, and a candle-lit date spot at night. When it comes to drinks, your favourite silent companion offers a surprisingly varied wine selection, refreshing spritzers, and simple dishes to gobble after you’ve had a few glasses.

Kertem is like Rambo in the jungle: it’s hiding between the bushes. This spacious garden bar can be found in Városliget – City Park, the second biggest park in Budapest –, a few minutes away from Hősök tere (Heroes’ Square). Despite being big enough to house most of the animals of nearby Budapest Zoo, Kertem gets really crowded at night, turning it into a cool place to hang out and get to know new people. The drinks are cheap, the concerts are free, there’s a bunch of bike storage racks, tasty grill dishes, cute dogs, and colorful fairy lights.

Púder, a citadel of culture and gastronomy characterized by a progressive, eclectic interior created by Hungarian wizards of visual arts; and Corvintető, an underground nest for regular benders and electro-enthusiasts situated on the rooftop of Corvin Áruház (Corvin Department Store).