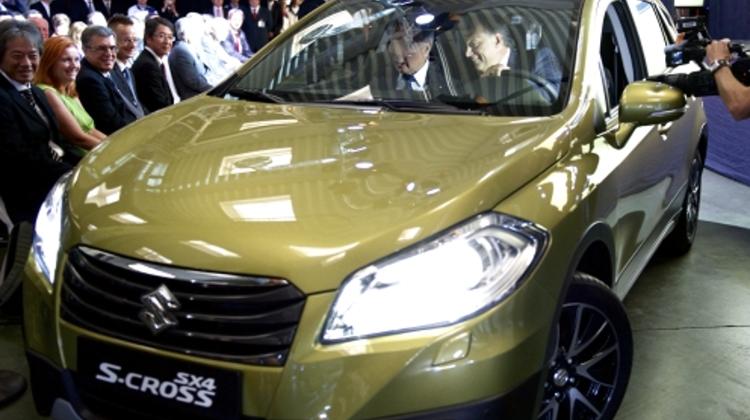 The first Suzuki SX4 S-CROSS, a compact crossover design for both city and leisure introducing many innovative features, was jointly driven off the production line at the car manufacturer's plant in Esztergom by President and CEO of Suzuki Motor Corporation Osamu Suzuki and Prime Minister Viktor Orbán.

Before the new car was unveiled, Prime Minister Orbán declared that behind every new Suzuki lie Hungarian jobs. Suzuki's Hungarian division is a committed partner to Hungarian businesses, 25 percent of its suppliers are Hungarian and in addition to its employees at the plant it provides a livelihood for 30 thousand Hungarian families.

The Prime Minister also said that in accordance with the strategic partnership agreement concluded with the company last November, the new bridge across the Danube at Komárom would be constructed by the end of 2017, facilitating the transport of heavy automobile transport vehicles from the plant, in addition to which the new stretch of road connecting Esztergom with the M1 motorway would also be completed by 2017.

Prime Minister Orbán stressed that Hungary has Japanese investors to thank for 1.36 billion euros in investment and some 2700 new jobs since 2010, adding that these investments are also a contributing factor to record high levels of employment, with 4 million people working in the May-June period.

President and CEO Osamu Suzuki explained that the SX4 S-CROSS would not just be available on European markets, but also in Oceania, Asia, the Near East and Latin America. The company plans to manufacture 100 thousand of the new models in the first year; increasing interest from export markets has increased planned production significantly, leading to the creation of 100 new jobs at the plant.

The Hungarian Prime Minister will be travelling to Japan for an official visit in November.

As part of the economic policy aimed at stimulating investments, the Government considers the vehicle manufacturing sector as a priority area. In this spirit, Hungary has taken several important steps towards becoming one of Central and Eastern Europe’s automotive industry centres. In January, the Mercedes factory launched its new CLA model at the company's Hungarian plant in Kecskemét. In June, Audi opened its EUR 900 million plant in Győr, Northwest Hungary, where the new A3 Limousine is being manufactured. In addition, Audi's Hungarian plant also boasts the world’s largest engine factory. A few weeks later, in July, it was announced that Opel would expand its manufacturing facility in Szentgotthárd with an investment of 60 million euros.