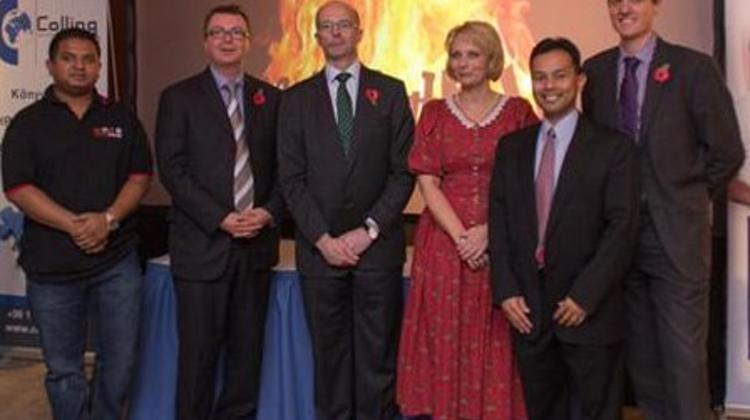 "Thank you so much for all the help! It was a fantastic evening, very well organized, with great people and a brilliant atmosphere." This feedback from the Csodalámpa Foundation is for everyone at the XpatLoop event on Monday 4 November. Together around 200 Xpats (expats + locals) united to help children suffering from life-threatening illnesses, raising nearly 1 million forints for this ‘Wish Fulfilling Foundation’.

Guests arrived ready for a feel-good Bonfire + Fireworks themed event at the InterContinental Hotel Budapest. Expats and internationally-minded Hungarians mixed and mingled while enjoying amazing views, of the Royal Buda Palace and Chain Bridge over the Danube, from the Panorama rooms where the fund-raiser was held at this 5-star hotel.

One of the highlights was a ‘laser fireworks show’ at 8.30pm, timed to fit the start of a live performance by 'The Carbonfools’, one of Hungary’s hottest pop bands. The electro-rock group kicked-off with their song ‘Birthday’ to celebrate the anniversary of Xpatloop, and the birthday of its founder Stephen Linfitt. “Making even one child's life a little brighter, and smile a little wider, made our charitable performance worthwhile,” said The Carbonfools.

This smart-casual affair started at 7 pm with live music from expat singer + musician Kasai, and a delicious mix of international and local food, including sushi rolls. ‘British curry’ by Mr Masala, and a wide selection of Hungarian snacks. Drinks included refreshing teas, freshly ground coffee from Amora, exquisite wines from FineWine Vinothek, a range of single malts from Whiskynet.hu, and draft beer from Becketts Irish Pub and Hooters Budapest.

The opening ceremony at 7.30pm featured the lighting of a ‘virtual bonfire’ by guest of honour Jonathan Knott, the British Ambassador, who also gave a short speech about the history of Bonfire Night* in the UK. Chris Russel, from the British International School, then introduced Éva Pautzer (pictured below) the Director of Csodalámpa Foundation who expressed gratitude to event supporters and guests in a truly heart-warming way.

Dennis Diokno (pictured left, with the FirstMed mascot) then spoke about his long term partnership with XpatLoop charity events, which dates back over 10 years.

Dennis also highlighted the fact that FirstMed will have a special anniversary event next year, which will also support the same worthy charity as this expat community event.

Zulkarnain Saer Khan (pictured below, with microphone) from the Curry House spoke next. Saer mentioned that although he is relatively new to town, he still instantly took the opportunity to support this XpatLoop event.

He explained that he recognised the merits of bringing Budapest's expat community together to support charity, and went on to offer HUF 200 from every future meal bill at his restaurant to the Csodalámpa Foundation.

Next up XpatLoop’s publisher Stephen Linfitt made a few concluding remarks focused on thanking the event main sponsors, and all supporters, for making the annual charity party possible. His closing lines warmly thanked event guests for their kind participation, and he welcomed everyone to revel in this social networking event packed with entertainment.

Guests got into the party mood right from the start, socialising while wine and whisky tasting, networking over beers, and some had a relaxing massage thanks to InRoomSpa. The Music Sommelier ensured the beat was right throughout the night. Feedback was all positive, “Congratulations on a successful and fun event,” said Alex Hope of Sony.

“Thanks and congrats! I’m really pleased I came,” said Paresh Parmar. “It’s a superb Bonfire night in Budapest. Friendly, open party atmosphere, with an excellent selection of wines, plus very good food. And all in the name of charity, great event,” commented Nigel Swann.

After The Carbonfools rocked the house, it was time for a live auction lead by Andrea Jádi-Németh (pictured below) on behalf of the charity, with Stephen Linfitt announcing the valuable prizes provided by sponsors. Quality items from Nokia, Zsofia River Cruises, Magnolia Day Spa, Sony, and Budapest Honvéd Football Club thanks to Alex Hemingway, all significantly helped increase the funds raised for the chosen charity.

In fact there were so many prizes that lots of guests went home with a gift, after a fun-filled night. PapirTigris offered every guest a fortune cookie to make it a lucky evening for all. Kasai (pictured below) played more live music as some guests had a dance and another drink before the party ended at about 11pm.

“As a Hungarian, it was very touching to see strong collaboration among expats for a local charity. It was a great evening, the party was really professional. Although it was raining outside, the sun was shining inside!”, said Márta Vágó, a senior member of the Hungarian business community. Other VIPs included Adam Goodman (pictured below) the film producer, and Adam Lebor the author and journalist, kindly contributed to the event.

XpatLoop officially closed the show by thanking everyone for coming, not least the the event main sponsors, and the following firms were also named for thier generous support: Bortarsasag, Brodyhouse, Goldlaser, KFP - Five Star Conference Service, ProHome.

Bonfire Night is an event celebrated annually in the UK, on or around 5 November. "Guy Fawkes, Guy Fawkes, t'was his intent, To blow up King and Parliament. Three-score barrels of powder below, To prove old England's overthrow; By God's providence he was catch'd, With a dark lantern and burning match."

By Timea Klincsek and Christian Keszthelyi