Hungarian State Folk Ensemble Is Touring The US, Has Ambitious Plans 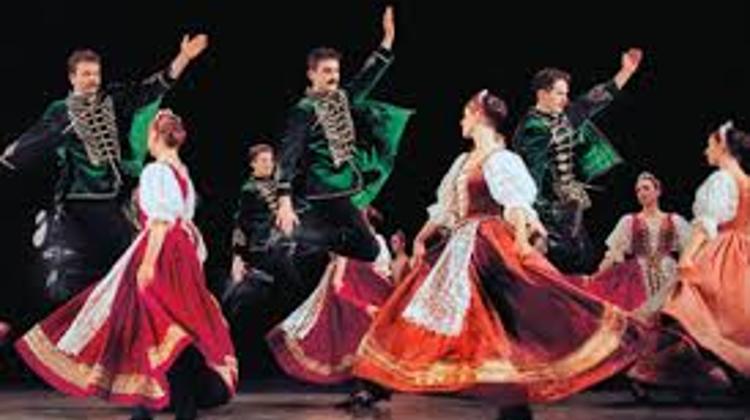 The Hungarian State Folk Ensemble is touring the United States; there will be a concert to help elderly musicians who are stewards of traditions; a new full-size program featuring dances from Sub-Carpathia will be compiled; and decision has been made to expand the Museum of Applied Folk Art. We have interviewed László Kelemen, director-general of the Hungarian Heritage House in Budapest.

László Kelemen, who visited the Hungarian State Folk Ensemble in the United States when the troupe was halfway with its tour, has returned to Budapest recently. The tour is taking place smoothly, without any hitch, he told us. In three and a half months the ensemble is giving 74 performances under the leadership of manager-director Mária Ferencz and artistic director Gábor Mihályi.

The tour is so long because the US is so vast. For a few days Kelemen joined the orchestra as a viola player. “The visit of the Hungarian State Folk Ensemble is strengthening the spirits of Hungarian Americans,” Kelemen says.

As the program covers each of major Hungarian-speaking regions, including Moldva and region of the three Rába Rivers, Hungarian Americans can find dances closest to their roots.

“New contacts could also be established during the tour of the US. We introduced Hungarian consul-general Károly Dán to Michael Beckerman, head of the music department of New York University. Beckerman is familiar with the Hungarian folk dance house movement and is an advisor to the Institute of Czech Culture in Manhattan. Dán and Beckerman discussed opportunities of cooperation.”

The Hungarian State Folk Ensemble is to return to Hungary on December 16. The troupe members will get a few weeks of rest and the work will resume in January 2014. Szarvasének (Song of the Deer) will be performed again and preparations are to begin for a new premiere.

“Several programs of the ensemble synthesize the dance and music of more than one region. Examples include Kincses Felvidék (Treasures of southeastern Slovakia) and Édeskeserű (Bitter−Sweet), which presents Transylvanian dances.

Sub-Carpathia is the next region to be covered. István Pál “Szalonna”, head violinist of the ensemble, comes from Sub-Carpathia, and that why he has been tasked to compile music for that performance. We are making preparations for a festival of dance houses, to which three official ensembles have been invited. Overall, our repertoire consists of 14 pieces,” Kelemen says.

He has told us that the Hungarian Heritage House and the Institute of Folklore of Cluj-Napoca (Kolozsvár) will jointly publish a collection of scholarly works, including a monograph each about Inucu (Inaktelke) in the Ţara Călatei (Kalotaszeg) region of Cluj county, and about Galbeni (Trunk) in Bacău county in the region of Moldva. The collection also includes musical recordings from Szék (Sic) in Cluj county, that were made in the period between the visits of music collector László Lajtha and the beginning of the dance house movement.

“Those recordings were made in the 1950s, when Hungarian ethnographers were not allowed to visit ethnic Hungarians in Romania. I am looking forward to its publication also in my capacity of a musician.”

There will be a charity concert on December 5, whose patron is János Áder, President of Hungary. The concert, to be organized in cooperation with the Kallós Foundation, is meant to support elderly and frail musicians who have taught generations of young musicians. Many of them are left without a pension or health insurance and we plan to help their purchase of medicines.

The Hungarian Heritage House will take part in the organization of a second series of folk song singing (Felszállot a páva) on television.

The state subsidy for the Hungarian Heritage House will increase for the first time in ten years. A part of those funds will be used to expand the Museum of Applied Folk Art. The museum will have a hall where folk dance evenings, concerts and other minor performances can be held. It is planned to lease a former retreat of writers at the village of Velem in Zala county and use it as a permanent basis in western Hungary.

“Valea Boroș (Borospataka) in Harghita county in Romania will host a dance house festival for the seventh time. We plan to organize a similar festival of dance house musicians from all around the Carpathian Basin. For that project we wish to cooperate with the open-air village museum (skanzen) and Dance House Association of Szentendre, Pest county. We also wish to strengthen our outreach to the professional people of Hungary.

When the dance house movement began, outstanding personalities supported us as for instance [poets] Sándor Csoóri and László Nagy and [filmmaker] Ferenc Kósa – and they lent prestige to the movement. We have to find renowned supporters today,” said László Kelemen in conclusion.