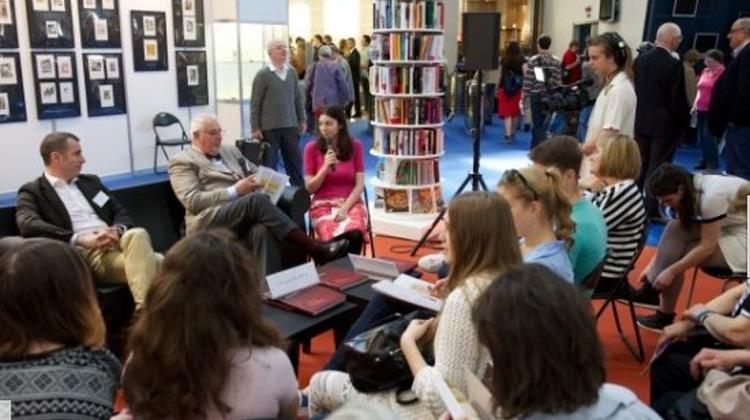 On Thursday, 24 April – right between the World Book and Copyright Day on Saint George's Day, 23 April and the World Intellectual Property Day on 25 April –, by evoking the old Catalonian custom of exchanging a gift of flowers and books, Dr Tibor Navracsics, Minister of Public Administration and Justice and deputy prime minister, accompanied by Dr Miklós Bendzsel, president of the Hungarian Intellectual Property Office, will ceremonially open the 21st International Book Festival Budapest.

The Hungarian Publishers' and Booksellers' Association, organizer of the festival was one of the first organizations adopting World Book and Copyright Day honouring creative work and the importance of reading – the significance of this day were even mentioned in the speech of Árpád Göncz, President of Hungary in 1995 at the opening ceremony of the 2nd International Book Festival Budapest.

It was also in 1995 when we first invited a country justly proud of its book culture to be or guest of honour and to present their culture and their contemporary literature at a representative exhibitor's stand – a tradition lasting ever since. In the last two decades we received the cream of European, Transatlantic and Far-Eastern book publishing.

Just a reminder: the presentation of German culture, so meritorious in its effort to internationally promote Hungarian culture, was announced by the president of Germany; China, in the year of the Beijing Olympic Games, chose Budapest to make its debut as a guest of honour.

We were the first among the European book fairs to introduce all 27 member countries of the European Union at a single gala: in 2011 we invited an outstanding author from each member countries, all of them with a new Hungarian edition of one of their titles, timed to be presented at this particular event.

These guest of honour visits served the goal of promoting the culture and literature of our partner countries, and, partly, to help Hungarian book publishing and literature to have a chance at being strongly present on international book fairs. Hungary was the first country of the region being offered the chance to debut as a guest of honour at the prestigious Frankfurt Book Fair in 1999, and the cream of contemporary Hungarian literature became known an renowned first in the German speaking countries and then in other countries. After a hundred years of hoping, in 2002 a Hungarian author, Imre Kertész received the Nobel Prize in Literature.

Judging from the preparations, this year's guest of honour appearance will be one of the most monumental of cultural debuts: the country of Turkey will have a stand of 150 m2 with 12 of their authors visiting Budapest: Elif Şafak, İskender Pala, Beşir Ayvazoğlu, Gül İrepoğlu, Solmaz Kamuran, Muhsine Helimoğlu Yavuz, Mavisel Yener, Tarık Demirkan, Oya Uysal, Furkan Çalışkan, Erhan Afyoncu and Işık Öğütçü. They will appear on writer and reader meets together with their Hungarian translators, publishers and fellow authors to meet those interested in Turkish culture. Guest of Honour debut of Turkey will be introduced by Turkish Minister of Culture and Tourism Ömer Çelik.

Twenty years ago the Hungarian Publisher's and Booksellers' Association, supported by the city mayor of Budapest and the Municipality of Budapest, established Budapest Grand Prize, which become the highest honour granted to a foreign author in Hungary, thanks to the receiving authors of considerable international ranking. This year's Guest of Honour Writer is one of the most famous author of contemporary Northern literature, Sofi Oksanen from Finland. After an hour long podium discussion she will receive the Grand Prize from István Tarlós, mayor of Budapest and András Sándor Kocsis, president of HPBA.

We consider it an outstanding event at this year's festival to honour the 70th anniversary of the Holocaust – and the quarter-century anniversary of the renewal of Israeli-Hungarian diplomatic relations – with a memorial stand and a number of thematic programmes. At the stand we will display several books on Holocaust, both old and published in the recent years, or even published specifically for the anniversary year, along with the books of the Yad Vashem Museum.

The memorial stand will also have a special exhibition which will display the heroic rescue actions of Országos Magyar Izraelita Közművelődési Egyesület (OMIKE) during the dark years in Hungary. The exhibition will be composed based on the research of László Harsányi, director of the Holocaust Museum of Páva Street.

The 10th anniversary of Hungary joining the European Union will also be stressed on the festival: together with the team of Európa Pont, an official institute of the EU, also located at Millenáris we will organize a European writers' meeting which, with the participation of the foreign guest authors of the festival will discuss matters such as the hundred years of Europe, 25 years without the Iron Curtain or individual and collective answers and life strategies in the expanded Europe.

We will also organize European First Novel Festival, an event created by broad range European collaboration. With the help of the diplomatic corps and cultural institutes in Hungary HPBA will be hosting the most talented first novel debutants of the continent for the 11th time. Organized by Éva Karádi, editor in chief of Lettre, European First Novel Festival helped over 200 young authors to be introduced for the first time on the international stage.

Many of them became noted authors in their countries since then. Which is even more important, many of these debutants had more than one of their books published in other countries after since their debut at the festival. Even if we only account for the Hungarian authors, this proves how big of a help this event can be to start a writing career. The Hungarian debutants in the last few years were names like Krisztián Grecsó, György Dragomán, Edin Szvoren or Viktor Horváth, receiver of the Europe Literature Prize in 2012. This year's Hungarian participant is Judit Hidasi.

The word 'international' in the name of the now more than two decades old International Book Festival Budapest is something the festival clearly deserves: from Austria to Japan and finally, to Turkey, 33 countries will be present at the stands. Including Sofi Oksanen, we will host 64 foreign authors in Budapest, most of them with titles already published in Hungarian – many of them with even more than one. To name a few, our visitors will be able to meet Turkish Elif Şafak and İskender Pala, Romanian Norman Manea and Matei Florian, Hungarian born US citizen Charles Gati, Anne Applebaum, also from the United States, Norwegian Jørgen Lorentzen – the list could go on for some time.

Although we are proud of our international ranking, the festival is just as much the most important site of introduction for Hungarian book publishing. Hungarian publishing houses usually time their new publications – hundreds of new titles in all genres – for the festival. A tradition borrowed from Book Week, the personal meet of writer and reader and signing of new and old titles is also a favourite amongst the events of the festival. We counted the exact number: 446 Hungarian authors will be signing their books at the exhibitor stands during the three and a half days of the festival.

The festival is not only a cultural event, since most of our more than 500 exhibitors will offer science titles, specialist books, lexicons, dictionaries, CD's, e-books, textbooks and reference books in addition to their fine literature titles. A special feature of our festival is that, unlike at other European book fairs, at Millenáris, serving as a huge bookstore, the displayed books are available for purchase, from the first moment of the festival to the last. Even the price of the entrance ticket, HUF 500 , can be deducted from the price of a purchase.

This fair with its more than 60 thousand visitors a year – many of them a representative of the book business – is a opportune venue for discussing the important questions of the book sector. This year's main professional event at the festival will be an awareness campaign jointly organized by HIPO and the National Board Against Counterfeiting. This campaign will discuss matters quite important to those working in the book sector: the legal problems of bulk digitalization, copyright in modern publishing, damage done by illegal downloading, and how much chance copyright has in the fight against the ever-growing presence of surreptitious editions and illegal downloading.

From the very beginning International Book Festival Budapest aimed to have all main members of the sector think of the festival as a forum of their own, a place where they can air their concerns and celebrate their success. Librarian's Club is now a more than 20 years old player of the festival, hosting conferences and smaller events for professionals where authors, publishers, librarians and agencies can discuss the most important matters. Like in the last few years, this year their discussion will be about legal, marketing and tax-related problems in e-book publishing.

The exhibitors and participants of 21st International Book Festival Budapest will basically take over the biggest buildings at Millenáris and its garden, which is, in April, an especially nice place to spend some time in. Good news are that this year, in order for our visitors to approach Building D (former Palace of Miracles), we'll be opening a second entrance. By taking down the ramp bisecting the building, a quite comfortable and specious exhibition space was created. This is where the most frequented group of exhibitors will be placed: children's and youth fiction publishers and their programme space, Children's Lit Kingdom.

Because of our wide offering of programmes and the attention from the readers that we experienced in the previous years, we are endeavouring to inform the public about our offerings, the titles brought to the festival and the Hungarian and foreign guest authors we are hosting in many varied platforms.

Besides our homepage, there will be special Book Festival issues of Heti Válasz, Népszabadság, Élet és Irodalom and Lettre. A detailed program will be available on Port.hu, in Fidelio Magazin and Bóbita Magazin. Prae.hu and Litera.hu literature and cultural sites will be present and covering the festival directly from Millenáris. We will have advertising spots in all major TV channels, Kossuth Rádio, Klubrádió and Inforádió. In collaboration with Új Könyvpiac we will air a catalogue with all new titles available for purchase at the festival, and mark all new titles with a distinctive label at the exhibitor's stands to make it easier for our visitors to find them.

Like the first festival in 1994, the closing act of this 21st one will also be an event organized to pay respect to Hungarian authors of note: the Birthday Literary Salon, hosted by Tamás Tarján, with the participation of authors celebrating a milestone birthday in 2014. Amongst the participants will be Gyula Borbándi, turning 95; Tibor Méray, turning 90; Sándor Kányádi, turning 85; Béla Pomogáts, turning 80; János Bányai, turning 75; István Bart, turning 70; Tibor Zalán, turning 60, and the youngster Gyula Böszörményi, turning 50 this year.