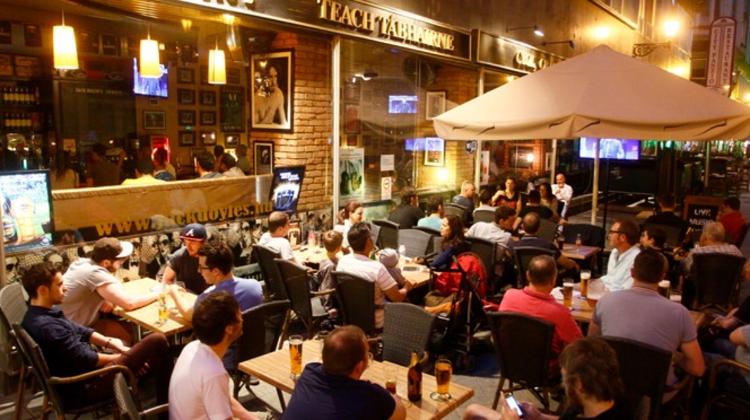 By <a href=" http://welovebudapest.com/en " target="blank"> We Love Budapest </a>: The time-zone difference between Europe and South America means that the games are played between 6pm and 5am in Hungarian time, but there is always a Budapest venue open to show live broadcasts. So don’t miss anything – no matter which team you’re rooting for, this roundup reveals where you can join loads of other cheering fans, often at locations offering drink specials and other soccer-related promotions.

The World Cup is on from June 12 – July 13, so check out the match schedule and make sure you set the Hungarian time zone. While you're changing your schedule to accommodate the football frenzy, take a look at the country groupings too.

Continental Tires are one of the sponsors of the World Cup, and they’ve set up a mini-Brazil in Millenáris Park (1024 Budapest, Kis Rókus u. 16–20). Here the ContiCabana will show all the matches on big screens while offering loads of other activities and programs such Brazilian dancing, kids’ programs, and concerts – the lineup includes the Hooligans (July 11), Charlie (July 12) and Punnany Massif (July 13).

Akvárium Klub is a popular outdoor/indoor venue in Erzsébet Square right in the middle of the city next to Deák Square. It will have three giant LED screens showing each game. The terrace creates a stadium experience because of its giant staircase, where you can sit and relax to watch the action. Fish and chips, hamburgers, and steak sandwiches mean you’ll never go hungry. There are also special packages available for the finals, like unlimited beer and a free pálinka shot for every goal scored!

The roof garden of the Corinthia Hotel (1073 Budapest, Erzsébet körút 43) will be transformed into a Brazilian-themed World Cup Sky Terrace. Along with seven HD TV screens, the terrace offers happy hour specials and authentic Brazilian food. In addition, guest commentators will be making special appearances at the big matches to complete the stadium sensations. Open each night from 5pm.

The Grund bar has a laid-back atmosphere and a long list of drinks, and for the World Cup matches they’re setting up a big LED screen. Some nights they have a 2-for-1 cocktail deal between 8pm and 10pm. This is a huge venue, so more than 500 people can easily fit – you and your friends will always find a spot.

ooking for a scenic backdrop for your World Cup viewing? Check out Holdudvar and the summer garden of Champs on beautiful Margaret Island, an easily accessible escape from downtown Budapest. Holdudvar is a popular venue with locals and will attract crowds for every match, while Champs offers a huge screen plus 20 TVs. Champs also has food and drink specials, and they recommend you book early if you want to secure a table.

Needless to say, Champs Sports Pub (1074 Budapest, Dohány utca 20) is dedicated to showing soccer, and it’s committed to presenting every single World Cup game – no matter the start time. There’s great pub food here, and foreigners love this place. It’s likely to be filled to the brim with expats and tourists, so no matter what match is on there’ll be plenty of cheering fanatics.

The hearty Cuban cocktail bar and restaurant La Bodeguita del Medio has a decidedly Latin American ambience, transporting guests to the heart of the action. They have a beautiful big courtyard with tables and they’ll be showing matches on a gigantic screen. Of course you can follow up a succulent Argentinean steak with a Mojito for the perfect evening.

Larus (1124 Budapest, Csörsz St 18/b) is a beautiful venue in Buda where you'll be able to enjoy all matches live on its beautiful terrace set amid tranquil greenery. The venue says its LED screen is among the biggest in Buda, with special high-quality sound. They also have a chef creating a special World Cup menu just for this month-long event. Tickets are 2,000 HUF and include a main meal and a snack. You can buy tickets in advance on their website or at the venue for small – or large – groups.

Szabadság Square will be transformed for the World Cup with a giant 30-square-meter (!!) screen showing every single match live. This square is huge so everyone will be able to find a patch of grass. This promises to be a family-friendly event, and in the past it's attracted thousands of people. In the afternoon they'll also replay the matches that took place late the night before for those who missed them. The square itself is stunning, and it’s expected to be a popular viewing spot again. Football-related films and documentaries will also be played between games.

If you’re sick of the usual options for the World Cup series you need to get to the Mom Sport Garden (1123 Budapest, Csörsz utca 14-16). Here you can watch the game on a big screen not only from the grassy lawn but also from the outdoor pool! So if it’s a hot night, why not try watching the game from the water?

Jack Doyle's (1052 Budapest, Pilvax köz 1-3) is an Irish pub that’s popular with expats and tourists and will be filled with an international crowd throughout the World Cup. Of course there’s the usual pub fare like nachos, garlic bread, burgers, and steak., as well as the full Irish breakfast... and you can bet there'll be freshly poured pints of Guinness to help celebrate or commiserate game results.

Located a bit further away from the city center in south Pest, Budapest Park (1095 Budapest, Soroksári út 60) hosts loads of concerts throughout summer. For World Cup matches, they offer a dedicated sport garden area with plenty of big screens – oh, and did we mention that it’s open til dawn, so regardless of the time-zone difference, you won’t miss a game here!

WestEnd's rooftop terrace (1062, Budapest, Váci Rd 1-3) is waiting for you high above the city with a giant 6x4 metre screen and a beer garden. There's great burgers and salads so you don't need to worry about going hungry. Salsa dancers and Brazilian drummers mean this place oozes South American appeal throughout the World Cup. There's space for more than 1000 people to sit and there are free programs too so you can fill the time between matches.