German Occupation Memorial In Budapest Completed Under Cover Of Darkness 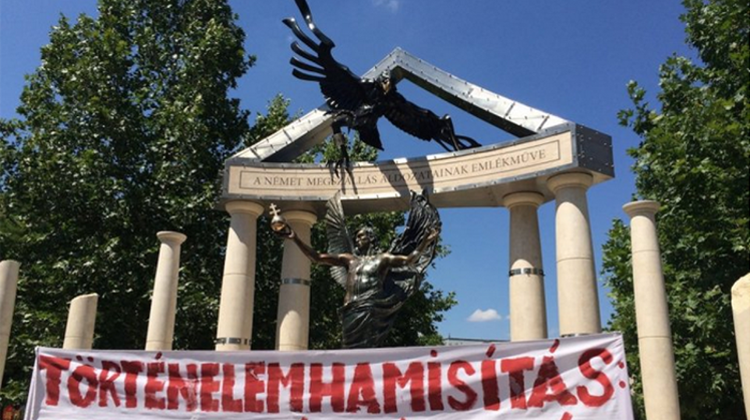 The controversial German occupation memorial was erected under cover of darkness early Sunday morning. Shortly after midnight some 100 police officers closed off the Szabadság square as workmen installed a timpanum with a bronze eagle, representing Nazi Germany. Below the eagle was erected a bronze statue of the Archangel Gabriel, representing “innocent Hungary”, holding an orb, representing the power of the state. One of the eagle’s talons is tagged 1944, the year of the invasion.

Inscription: “Memorial to the victims of the German invasion”. Banner: “Forgery of history”

The move came just hours after the Capital Court had ruled against a referendum on the statue filed by the one-time District V Socialist mayor Pál Steiner, citing a government decree that classified the construction as “of outstanding importance for Hungary’s economy”. Steiner called the decision “shocking” and argued that Hungary has no economic interest in the memorial, which will only “damage the country’s reputation, infuriate democratic states, and divide and offend Hungarians”.

Despite Prime Minister Viktor Orbán’s recent claim that the monument is “morally precise and immaculate”, it emerged on Monday that the Hebrew inscription of the monument had mistranslated the word “victims” as “sacrificial animals”. Chancellor János Lázár said if reports of the error were true, the government will correct it and apologise.

After workmen had told reporters that the monument would be officially unveiled at 10 am on Monday, Lázár said the government did not want to “triumphantly” unveil the monument officially.

Critics accuse the government of attempting to absolve the Horthy regime of responsibility for the death of nearly one million Hungarians, including two-thirds of its Jewish population, by putting the blame entirely on Nazi Germany.

However other opposition politicians consider the memorial a “rubber bone” intended to distract the attention of the political opposition from real economic issues. LMP co-leader András Schiffer has called the protest “overblown hysteria”, adding that the left’s prioritising of 20th-century history debates over job creation had been a factor in its heavy defeat in the general election.

Riot police arrived on the scene when opposition politicians and two hundred civilian protesters tore down the protective fence around the memorial and pelted the statues with eggs on Sunday morning. The demonstrators included politicians from the Socialist Party (MSZP), Together-PM and the Democratic Coalition (DK). Hundreds have left trinkets, candles and other objects to express their opposition to the memorial, while a large banner proclaims “Forgery of History, Poisoning of the Spiritual Well”. The monument is reportedly now the most protected object in Hungary, according to a police source of ATV.

DK president Ferenc Gyurcsány said “with this gesture Orbán is falsifying (history) and dishonouring all the Jewish, Roma and gay people who died in the Holocaust”. The Liberal Party called the construction “a memorial to the arrogance of the Hungarian government”. Together-PM said the monument would be removed if Budapest elects an opposition mayor in the autumn.

The plan to mark the 70th anniversary of the occupation was announced at the end of last year.

The construction began two days after Fidesz’s election victory, when Orbán reneged on a public promise to discuss the matter with Jewish organisation Mazsihisz “after Easter”. Two days after the national poll workmen began building the barrier around the designated site of the monument.

Mazsihisz said on Monday afternoon that its attempts to initiate a dialogue about the monument during the year had not been successful, but had not been entirely in vain because several outstanding scientists, religious and public figures came forward to criticise the symbols it uses. Protests have continuously been held against the statue plan for over a hundred days, it added.

Opposition has come from abroad too, including from 30 US congressmen of Jewish ancestry who asked Orbán to cancel the construction in an open letter in May. Orbán brushed off the criticism, saying it is “not a Holocaust memorial but a tribute to all the victims of the German occupation”.