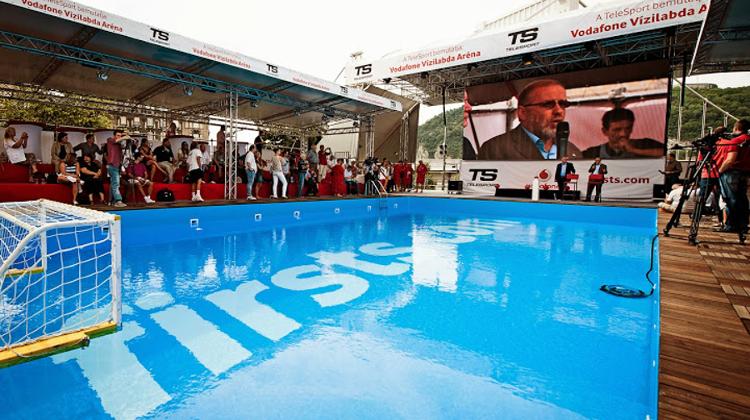 Rita Drávucz, Alexandar Sostar, Gergő Kiss, Zoltán Kósz and Zoltán Szécsi, World, European and Olympic Champions have opened the Vodafone Water Polo Arena, the see-through pool erected in the inner City of Budapest, on Március 15 Square. In Vodafone Arena, a structure built in just over one week, 290 spectators can support the teams, view matches together, and, in our hopes, celebrate the success stories of the ‘home side’ on the last 4 days of the Budapest Water Polo European Championship – explained György Beck, President of Vodafone Hungary.

The gigantic, 4 metre by 10 metre projector made up of 300 thousand led lights and displayed in the Arena, which is open to visitors from Thursday till Sunday, will also be clearly visible from Március 15 Square, so spectators will be able to follow the men’s and women’s finals, the qualification matches, and, of course, also the finals of the European Championship, not only from inside the Arena but also from the Square.

Those who will be watching the show matches from the square will be able to follow events through the pool’s glass wall, almost from under water, including the Firsts match to be played on Sunday, before the men’s bronze medal game and the European Championship finals, where Ádám Steinmetz, Olympic Champion; Frank Tóth, World Cup Winner; as well as Szilárd Jansik and Márton Lévai, members of the national team will fight for victory with the amateur water polo players challenging them.

At the inauguration ceremony, Dénes Kemény, President of the Hungarian Water Polo Federation described the Budapest European Championship as being extremely successful, and joyfully welcomed Vodafone Arena, where hundreds of spectators may view the remaining matches in a pool setting, in addition to the pool located on Margitsziget (Margaret Island).

As he explained, the success of the European Championship was also recognised by the heads of international water sports federations (FINA, LEN); going as far as calling Hungary the centre of the world’s water sports, as the European water polo championship currently taking place on Margaret Island is only the first step in an exciting series of events, as in 2017 Budapest will organise the junior European Swimming World Championship, then, in 2021 both the adult World Aquatics Championship and the Masters World Championship.

Thanks to M1, from Thursday morning onwards all remaining live men’s and women’s matches of the European Championship may be followed live form the fan centre, including those not broadcast live by M1, explained dr. György Beck, adding that Vodafone Hungary is the official Telecommunications Partner of the European Water Polo Championship. On the last 4 days of the European Championship, prior to the matches played by the Hungarian team, the channel shall switch to the TeleSport stage of Vodafone Arena, where Olympic Champion polo players will analyse matches live, straight from the poolside.

The Arena weighs over 200 tons. The length of the backbone structure is close to 10 kilometres, and 150 cubic metres of water were pumped into the pool over 3 days.

One of the key components of Vodafone Arena, stretching over an area of close to 700 square metres, is the 8x16 metre, see-through pool that will house show matches and other attractions.

Entry to the Arena is free, and a simple on-site registration is the only requirement. Due to the high level of interest expected in the matches of the Hungarian national team and the limited capacity of the Arena, visitors are advised to get to the Vodafone Water Polo Arena on Március 15 Square 30 to 40 minutes prior to the matches’ start.