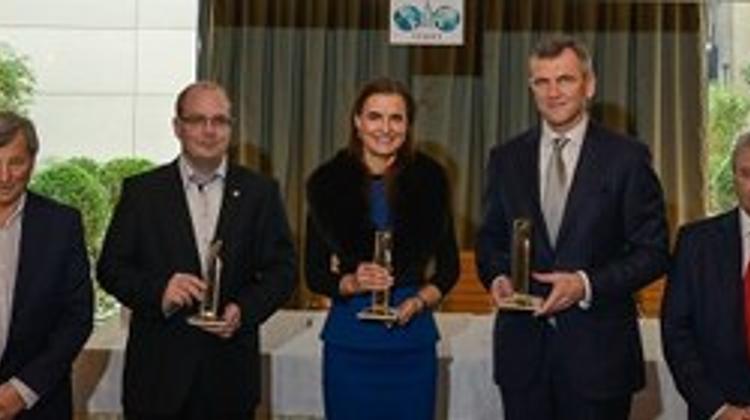 During 2014 several professional forums noticed the excellence of the Boscolo Budapest Hotel and the 120-year-old New York Palace and this attention was crowned by different awards.

The year instantly started by winning the “Hotel of the Year” award in 5 star category, on 17th January 2014 within a ceremonial framework which was handed over by the Hungarian Association of Hotels and Restaurants in collaboration with the Hungarian Tourism Plc. As a next step, on 11th March 2014 on the SIRHA Budapest Dessert competition the winner became Anna Nagy, the confectioner of the Salon Restaurant. We are also proud for this magnificent result.

During autumn we managed to receive the Budapest Brand prize, which was awarded to our beautiful New York Café by the Budapest general assembly. The award represents a lasting value, because the winner of the prize contributes to the adorning of the image of Budapest.

The XVI. Hungarian Real Estate Development Award ceremony was held on the 10th December 2014 in Budapest. The New York Palace was proud to receive awards in three different categories: shared I. prize in heritage category, I. place in hotel category, special award category I. prize based on the votes of the candidates. Based on the won prizes the overall rank of the New York Palace was the II. place.

Regarding the outstanding events, The Boscolo Budapest and the Boscolo Residence can proudly announce, that on the 9th October 2014 appeared in the „Gault&Millau Hungary 2015” edition. Meanwhile, the Salon Restaurant this year received 16 points again by the Gault&Millau ranking and by this achieving a shared II. place among all of the Hungarian restaurants.

The year was closed by an impressive event, the Boscolo General Executive Meeting which was organized between the walls of the 120 years old New York Palace between the 2 – 4 December 2014. Among many excellent and high category 5 star Boscolo Hotels the group's flagship, the Boscolo Budapest, won the great opportunity to be the host of the international managers of one of the leading international hotel chains. On the aforementioned event took place the premiere of the new image video of our hotel, which enjoyed a great success.