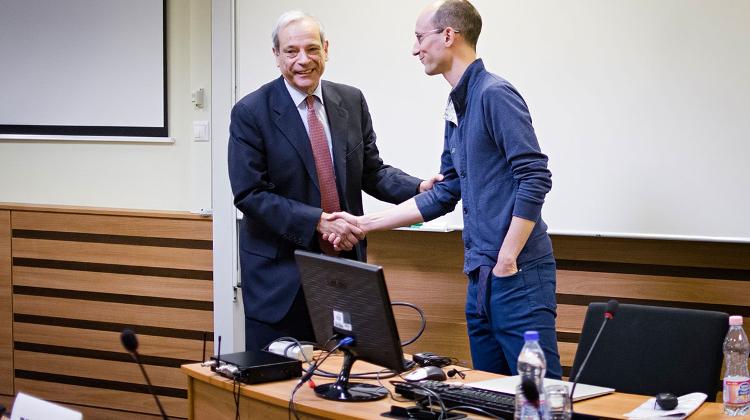 In 2008, CEO and Co-Founder of Prezi Peter Arvai left his native Sweden during a major global recession to start a business in Budapest, his parents' native city.

With only a very small amount of seed money from Magyar Telekom (Hungary's largest telecommunications company) – not enough to pay everyone in the company – Arvai and his co-founders launched Prezi, a cloud-based presentation software now a multi-million dollar company with 53 million users and over 250 employees. Arvai shared his story and his insights at a meeting with CEU Business School students on Feb. 24.

"We came to Budapest and said 'We want to take on Apple, Google and Microsoft from Budapest.' No one thought that was the safe thing to do," Arvai opened, but he and his co-founders "just thought this [Prezi] would be something big."

Knowing he would have to present at start-up conferences, he wanted to stand out and make an impression, but he didn't know how. He came up with the idea to wear a suit and tie because "no one wears suits and ties at these kinds of conferences.

People were curious and Arvai wanted to make the analogy that regular presentation slides were confining, like ties, but that a product like Prezi could truly help people break out of the confines and tell their stories more effectively.

His visual metaphor – cutting off the tie he was wearing – was ruined by his colleague who was supposed to hand him a pair of scissors at just the right moment but was, instead, completely ignoring Arvai's talk and flirting with a girl. Although Arvai thought they had blown their opportunity, when the moderator asked if audience members would pay for Prezi, about half raised their hands.

After the conference and a Tech Crunch blog article that went viral, Prezi really took off with investors coming to them.

Prezi has collected statistics from customers who confirm that their tool allows them to better express their ideas and has increased sales. But why is Prezi a more effective tool than others out there? Arvai and his colleagues believe the success of Prezi "has to do with how brains process information."

He explained that the human brain tends to remember so-called landmarks. Prezi highlights these memorable landmarks by "breaking out of slides for dynamic storytelling." He demonstrated with his own dynamic Prezi presentation.

Despite a near-global recession, Prezi has flourished in the past several years and Arvai thinks it wouldn't have been possible even a few years earlier. "When my parents were born, an average company lifespan was about 60 years. Now, it's about 15-16 years," he said. "It's a big change and you have to have an accelerated rate to become a successful company."

He noted that Google is, in fact, average age by these standards. Kodak, on the other hand, was well beyond average by these standards; the well established company was synonymous with film but went bankrupt after 130 years. That same year, Instagram was bought by Facebook for $1 billion.

"They're both in the same business and one of them had a ton of experience, a ton of resources. Instagram was new and had only 13 employees. But the latter are the ones who succeeded."

Kodak/Instagram example to demonstrate how "creativity can trump experience." When he talks about creativity, people often approach him and say, "I'm not a genius; how do I break out in this world?" Arvai believes that creativity is more a state of mind than a predisposed trait. In his view, entrepreneurs need to ask themselves three questions: 1. Are you intrinsically motivated? 2. Are you able to make yourself vulnerable? 3. Are you able to challenge your assumptions?

Using Spotify as another example, Arvai noted how its creator, Swedish entreprener Daniel Ek, essentially went through these steps. His love for music drove his innovation and he made himself vulnerable by admitting that pirating music (which was often the majority of people's preferred method for downloading music) was not great and, in fact, illegal. Ek challenged a basic assumption by wondering why we weren't getting "free" music via the Internet when we had been given that service through radio for decades. "He came up with a way to deliver all the world's music (at least what the companies would agree to supply) on his platform," Arvai noted. "Within a few years, it became a $4 billion business."

Answering questions about how to put together the right team that works well together, Arvai advised students to think of a business partnership like a long-term relationship, or marriage. "If you aren't willing to marry your co-founders, then it's going to be a very challenging ride. Conflicts can be good, healthy tension, but if you don't have a fundamental belief in and love for each other, then it can be a problem."

He also recommended finding people who are complementary to one another. "We have a unique combination of technical people, artists, and product development experts." Open dialog within the company is also imperative, he said. Prezi has two criteria for assessing ideas within the company: 1. The idea must be line with the purpose of the company, and 2. The idea must have potential to impact many people worldwide.

With the constantly changing landscape of the business world, Arvai believes that he future for organizations will be to be very clear regarding the purpose they serve and being credible in serving that purpose.

"The Internet is leveling the playing filed for everyone who has a creative idea to put forward in the world. If you can get people passionate and start rallying around, you can reach every corner of the world," Arvai said. "The world has changed dramatically in just the last 50 years or so.

The economy is not the same. We are seeing challenges and opportunities. A lot of people are losing traditional jobs but getting new kinds of jobs. It's you guys in this room (at the CEU Business School) who will be determining what these kinds of jobs will be, so it's very important that you take this task seriously and bring these kinds of jobs to the world."