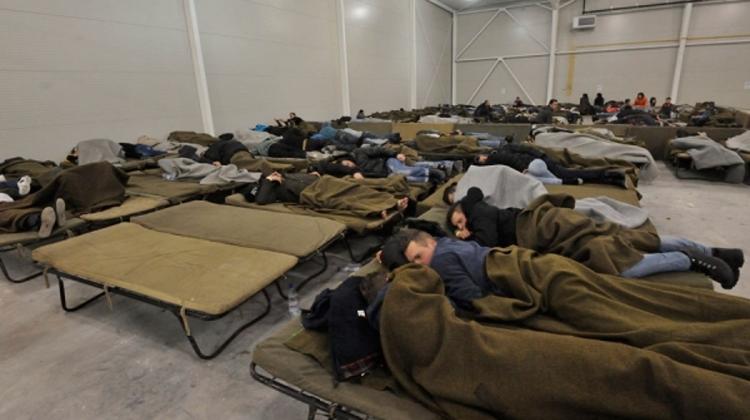 Thousands of Kosovars are thronging in Pristina to make it to the coaches that take them to Belgrade, from where it’s easy to reach the Hungarian border. In the past Belgrade-bound coaches only picked up Kosovars in Pristina and Prizren but these days they can be boarded at numerous localities in Kosovo. Kosovar families are selling their property and movables by the thousands and are hitting the roads that lead to Hungary.

Kosovar families are selling their property and movables by the thousands and are hitting the roads that lead to Hungary.

If other European countries are facing similar problems, why hasn’t Hungary adopted the good practices of others?

Why has the Serbian–Hungarian border been so popular among asylum-seekers?

At present the border between Serbia and Hungary is extremely attractive because only a narrow canal separates the two countries. Once the migrants have crossed that canal, it’s only a matter of chance if they run into their relatives (who come to Hungary from the West to pick up their kin), human traffickers, or Hungarian police.

Hungary has become the focus of the torrent of western Balkan migration. Worse, it is now also the Central European center of the route of Syrian and Afghan refugees, who come via Turkey, Greece and the eastern Mediterranean. Two of Europe’s busiest migration routes are now leading across Hungary! If that is not enough, a Turkish air line is supplying African refugees too. So in winter many of the African migrants choose the route across dry land, which reaches Hungary, because it’s cheaper and less risky.

Is it just a myth that the Schengen frontiers are strictly guarded?

It is. In June–September 2014 there was a year-on-year increase of asylum-seekers both in Sweden and Germany. In the first it went up by 116 percent and in the latter by 73 percent. Thousands of illegal migrants crossed Hungary, Italy and some other countries without the authorities ever noticing them.

Why aren’t they stopped by the Hungarian police at the border?

Although officially speaking illegal entry qualifies as grounds for compulsory expulsion, the illegals may not be expelled because they immediately apply for refugee status. Until the immigration authority has not passed an enforceable decision, asylum-seekers must be treated as refugees. In sum, the Kosovar Albanians may just walk into Hungary.

Why so many of them now of all times?

The Kosovars have a misconception about the way Germany and Canada treat refugees. Kosovar refugees, who are actually persecuted at home, get EUR 300 monthly. If such a family has several children, they are entitled to a sizeable income. Kosovars think that if Germany subsidizes refugees so lavishly, it earnestly needs them. They ignore a statement by German Interior Minister Thomas de Maiziére: “Kosovars who face no persecution at home are summarily deported to Kosovo.” The Kosovars only listen to what the human traffickers tell them.

Canada’s announcement about launching its Express Entry immigration program has caused veritable emigration frenzy in Pristina. Canada accepts skilled workers who can attest their command of English or French, a skill, and earlier work experience in Canada. However most of the Kosovars entering Hungary don’t speak a word in any world languages and are unskilled.

Undisturbed by the facts, thousands of Kosovars are selling all their belongings to generate the fee they have to pay to middlemen, who are abetted by Canadian attorneys-at-law. The middlemen submit the applications, transport the Kosovars to the Hungarian border and buy the air tickets.

Although Kosovo gained independence in 2008, the Serbians still consider it a Serbian province and so they do not need a passport to reach the Hungarian border. Whenever the European Union increases pressure on Serbia, it narrows the stream of refugees (to 500 per day from 1000) but Belgrade is not interested in keeping the Kosovars at home.

Kosovars have the misconception that Germany has agreed with Canada: those unaccepted by Germany may enter Canada. That myth has been rejected, among other persons, by Faton H. Bislimi, a Kosovar who teaches in Canada. Only the human traffickers benefit from this exodus because Canada doesn’t accept them and Germany deports them back.

If all odds are against getting refugee status, why are they still trying?

Kosovars know nothing of European Union law – they only believe what they see. They think that if Hungary were unwilling to let them pass, the frontier would be heavily guarded. But the Hungarian police only extend humanitarian assistance because, for instance, many of the infants suffer from hypothermia by the time the parents reach Hungary. Actually Kosovars see taking children along as a guarantee for success to gain passage to the West.

Why is it good for the European Union if Kosovars take their children along?

It isn’t. But there is a rule that if an illegal has his family with him, they may not be detained and taken to a detention center – because a child may not be held responsible for what its parents do. Kosovars decode this treatment like this: they don’t detain us if we take our babies because they want us to bring along our kids. They are convinced that affluent Europe expects them to act so because children – who will grow up to become working people – are sparse here. So Kosovars come in throngs.

If Europe opposes immigration, why aren’t the borders strictly guarded?

Since the time of Prime Minister Ferenc Gyurcsány [2002–2009], the Hungarian border has been guarded just by the police. The Hungarian national police command has this to say of this issue: “The external frontier of the Schengen Area is continuously assured. No one may just walk into Hungary without being noticed. The police make it a point to handle the migration pressure along the Serbian border and to protect the inhabitants of the localities along the border, which also evidenced by the high number of illegal migrants who have been caught.”

By contrast, the reporter of Heti Válasz has seen that even transporting the throngs of immigrants is a challenge for police. Hungarian police have this working philosophy: their activity may not impede the lives of law-abiding citizens; they may only block the activities of criminals.

The presence of Hungarian police along the border imparts a sense of security rather than intimidating anyone. If soldiers were there, their presence would be a stronger deterrent even if they couldn’t use their weapons. (Note that during the 1950s a lot of Hungarians left Hungary and eventually settled abroad. When an illegal shows up, it’s impossible to tell if he is an economic refugee or he was really persecuted back home.)

If it turns out that he is an economic migrant, is he expelled?

In principle, yes. In practice, many of them stay in the European Union after all because they “disappear” or move on to another country by the time a decision is made about their status. The immigrants are ingenious: many of them have changed their name. That’s because when the same person is caught the second time, the expulsion proceedings is faster. A new name gives you a new chance. That’s why nowadays the migrants are also fingerprinted.

Is Hungary threatened by a sea of economic immigrants?

No, those entering Hungary through the Serbian border wish to go on to Germany, Sweden and Canada, where welfare relief is the most generous in the world. That said, the inhabitants of the villages along the Hungarian–Serbian border have a precarious security situation both because of the some 1600 migrants that pass along their streets daily and the Hungarian criminals that abet their passage. Indeed the whole process is stoked by the human traffickers.

Why do migrants consider Hungary an ideal gateway?

It’s easy to pass through Hungary because the border zone is flat; the motorway is close to the border, which helps the traffickers. Although the border is monitored with heat-seeking cameras, it appears that the European Union is unguarded.

The Hungarian police cannot afford to assign a massive, armed contingent for policing the frontier, and there is no separate frontier guard corps in Hungary. When migrants are rounded up, that’s done by policemen and not soldiers, so it’s less scary. For illegals what really matters is crossing the Schengen frontier and the Serbian–Hungarian border fills that bill.

The illegals are not transported to a refugee camp – they are just given a free train ticket to travel there on their own. All they need to do is changing to another train that heads towards Germany. (Recently raids have been made to take illegals off from Germany-bound trains.)

How can the situation be changed?

Apart from Hungary’s terrain, the conditions could be changed. Hungarian Prime Minister Viktor Orbán has declared that the government will take action, namely by detaining illegals for quite some time. But the issue of handling the numerous children coming alongside the illegals seems to be unmanageable from a human rights point of view. Until 2013 a considerable part of the illegals were detained by Hungary but eventually Hungary yielded to international pressure and abandoned that practice.

One thing is certain: the guarding of the frontier should be made stricter so that crossing a narrow, green border area shouldn’t mean entering the European Union.