Vác FC Match Report: Starting Where They Left Off 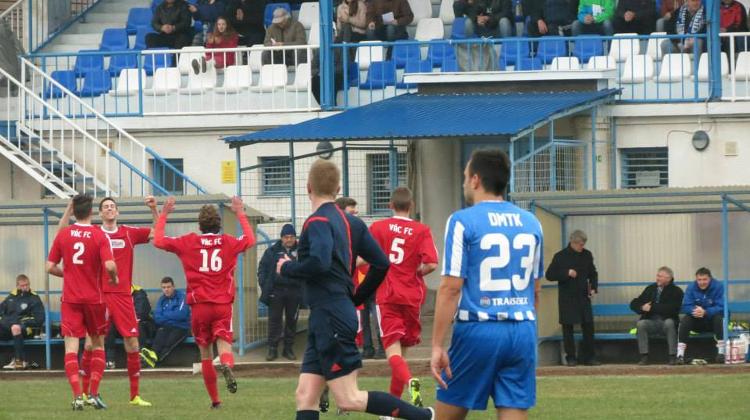 Finally, after a long 3 month winter break Vác FC have resumed their quest for back to back promtions which would see them ply their trade in NB2 next year. They traveled to Dunaharszti where they encountered a well drilled, organised team trained by Péter Króner. It would have been naive to expect an easy victory, however after the 2nd placed team, Kozármisleny, and their loss just a day before meant a win would increase their lead at the summit to eight points.

The new winter arrivals were Kriztian Kószás, Barna Tóth and Mattyas Magos. They all started for Vác FC on matchday 16 against Dunaharszti MTK.

The first five minutes of the match were fast paced but diffiult for the away side as they tried to tackle the uneven pitch. The first memorable piece of action was on 10 minutes when Vác’s Pallagi took a free kick only for it to be cleared of the line.

In the 17th minute Vác FC were preseented with a gift. Magos raced down the right flank and then crossed into space. Richard Zsolnai’s headed flick, gave Kószás an open goal which he duely converted for his first goal of the season and for the club (0-1)

After the goal, the visitors dominated. However, on 27 minutes, the home team won a freekick approximately 25 metres from the goal but David Palásthy saved confidently.

In the 34th minute Tóth passed to Kószás at pace and he immediately shot but the advancing keeper saved and did well to hold onto the ball.

For the remainder of the first period there were no more clear cut opportunities for either team. Vác controled the game, although they couldn’t double their lead.

The second half began with a mistake from Zsolnai which resulted in two consecutive corner kicks for the hosts. After some last ditch defending the visitors were able to maintain their lead.

However, Dunaharaszti MTK increased the pressure, they shot and hit the bar. Another close call for Vác FC who were riding their luck for the first 15 minutes of the second half.

After 56 minutes Vác FC Head Coach János Csank sent Rusvay on to the pitch in exchange for Fábri. Shortly after, Pölöskei swapped with Kószás on 62 minutes.

The substitutions turned out to be another Csank masterstroke as Rusvay suceeded in doubling the visitors lead from Zsolnai’s through ball (0-2). Just 8 minutes later, Rusvay was on target again scoring a third goal (0-3)

This was to be the final score. Dunaharaszti MTK were deflated but tried to concentrate on their defensive duties and damage limitation. Csank sent on Greff in place of an injured Magos.

The final chance of the match was from Miholics of Dunaharaszti but under pressure from the imposing Szeleczki, he put it over.

Vác deserved their victory and during the 90 minutes it was clear for all to see the difference in quality between the two teams. It was a vital victory for the visitors who now have an 8 point lead on their nearest rivals, Kozármisleny.

This Saturday Vác FC will face tougher opposition at home to SZEOL SC who also strengthened during the close season. The match kicks off at 14:30 and will be held at Vác Városi Stadion.