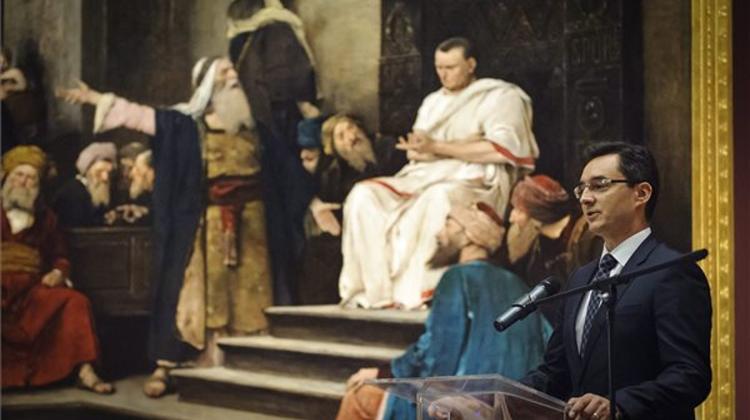 The cabinet office has initiated a procedure to prevent Mihály Munkácsy’s monumental painting “Golgotha” from being permanently removed from the country. “With the listing procedure, the government wants to keep this extraordinary work of our national painting in the Hungarian sphere of interest,” the national office in charge of oversight of cultural heritage said. “Naturally, the procedure will not prevent the owner of the painting from selling it, as its listing has no such purpose.”

The painting will be listed temporarily until rules on a permanent listing are applied, it added.

The owner, the Hungarian-born American collector Imre Pákh, said on Sunday that he would have “Golgotha” removed from the Déri Museum in Debrecen because talks on the possible sale of the work to the state have fallen through.

The painting is one of eminent 19th-century painter Munkácsy’s famous “Christ Trilogy” and is currently on loan to the Déri Museum, where all three paintings are on display.

The state has owned “Ecce Homo!” for years and it recently acquired “Christ Before Pilate”, another of the three, from Canada’s Art Gallery of Hamilton for 5.7 million dollars, with funding from the National Bank of Hungary’s programme to buy national art treasures.

Ferenc Gerhardt, deputy governor of the central bank, said on public television earlier that the bank would pay 6 million dollars to acquire the painting, though Pákh is asking for 9 million dollars.

He said on Sunday that the painting would be removed on June 25.

He noted that Christie’s, Sotheby’s and Fine Art Asset Management, had appraised the painting and they had all estimated its value around 10 million dollars.