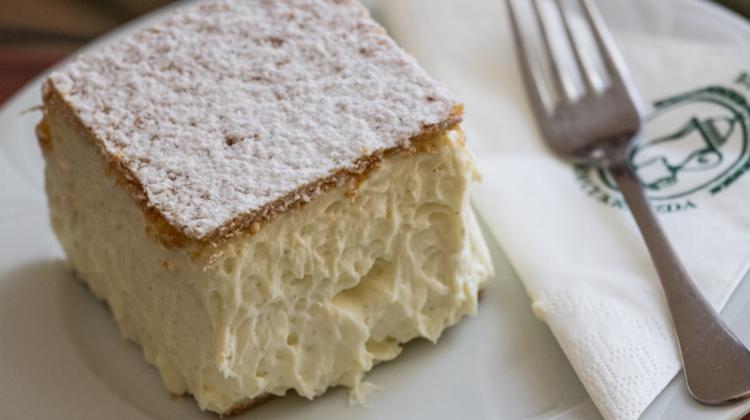 By<a href="http://welovebudapest.com/en" target="blank"> We Love Budapest </a>: There are many delicious sweets that come out of the Hungarian kitchen, and Budapest's many "cukrászda" - with their rich history - are the perfect spots to enjoy a decadent slice of cake. We visited Budapest's legendary confectioneries and we tried one particularly famous or popular cake at each one. We have to say that while there is obvious skill and decades of experience in each bite, at some places there was a kind of "mass produced" feeling. Nevertheless you simply cannot leave Budapest without trying a Hungarian cake!

Located on Vörösmarty Square and dating back to 1858, Gerbeaud is one of Budapest's most famous spots to get delicious desserts. Unlike at the other spots, here we have two recommendations. Firstly, because it's Emil Gerbeaud that gave the world the Gerbeaud slice (also written as "Zserbó szelet"), we suggest the rethought/reworked version of this Hungarian favourite: the Gerbeaud Sundae.

While it's quite pricey (2550 HUF + service fee), it's a huge dessert that's practically a meal. Two scoops of walnut sponge, one scoop of chocolate ice-cream, two scoops of walnut ice-cream, chocolate sauce, apricot sauce, crispy walnut linzer, whipped cream and apricot foam, topped with a small Gerbeaud slice. It's super sweet, yet the perfect mix of old and new, cake and cream, warm and cold. Secondly, we recommend the classic cake (pictured) served with vanilla ice-cream and the legendary "cat's tongue."

Up in the Buda Castle District there's a cafe that dates back to 1827 and it's definitely one of Budapest's top spots to get a slice of cake, particularly if you're in the castle area anyway. Ruszwurm is always busy, but after just a little wait you'll get a table. It's most famous for its krémes, which is like a Vanilla Slice. This cake is essentially fresh cream between two layers of pastry, dusted with icing sugar, and it's nothing short of amazing. If you're not usually a fan of the often gelatinous Vanilla Slice then you still must try Ruszwurm's version - we promise it's much, much better. The interior design here is like stepping back in time to the Budapest of the "olden days" and it's worth a visit just to sip tea amongst the old furniture and decorations.

The one-time Andrássy Avenue store of Gerbeaud was the Szenes Palace's confectionery, and today it is the Művész Café. As the name suggests artists from the Opera and nearby theatres have been regulars at this spot since 1898, dropping in for a black coffee and or a slice of delicious cake. To this day there are some Hungarian writers who visit, meeting friends under the giant chandeliers. The turn-of-the-century interior is an attraction in itself, while during spring/summer the terrace is popular too. One of the favourites is the aranygaluska cake, which is a walnut based creamy dessert, and when you slice into it, it oozes a delicious vanilla cream.

This icon of the District VII Jewish Quarter has been around since 1962 and continues to be a staple for locals to this day. The Jewish cake shop also prepares Jewish sweets for the various cultural and traditional celebrations, but one all-year-round favourite is the flódni. Flódni is a layered cake with walnut, poppyseed and apple parts. By all accounts it's a simple dessert but there are still strict rules (relating to kosher preparations) and Frőlich's own secret recipe that ensure each cake is just right. Overall while it's a slice, it's very filling.

Jégbüfé was established in 1952 and is located behind the bus stop at Ferenciek Square. During the socialist years it was state-owned and over the years it's become an iconic spot for take-away cakes. The long counter is filled with sweets on large trays, so it's tricky to pick just one to recommend. We tried the képviselő fánk which is a giant puff pastry filled with cream and thick custard. As you can see from the image it's quite a serve and we think it's big enough for two. There's no seating at Jégbüfé, just standing room by the counter overlooking the Square. Don't expect anything “new wave” here, just the classics.

Right near Jégbüfé, the Auguszt Confectionery was established 1870. We tried the classic e80 cake aka "Elemér bácsi's" cake that was created for the 80th birthday of Elemér Auguszt - the prized confectioner. It's a rich cake with chocolate cream, a little marzipan, pastry and plenty of coffee-cream. Auguszt is a nice spot along a busy thoroughfare, right in the heart of Budapest. It's old-fashioned charm is just as sweet as this slice of cake.

1901 was the year the Daubner legend began at Orosház under the direction of Béla Daubner. After the confectionery was made state-owned, the family moved to Budapest to find a new spot for their popular cakes.

Since then the "cukrászda" on Szépvölgyi Road has created millions of cakes for birthdays and celebrations. Aside from the old favourites, they're trying to experiment with new flavours and technologies.

Unfortunately this spot is not about enjoying a slice of cake, while relaxing with friends - it's primarily designed for take-away. We recommend the madártej ("bird's milk") cake, or one of the savoury treats if you don't have a sweet tooth.

The Városliget Café has a prime position on City Park's lake and it's perfect for a romantic dinner or an afternoon cake with friends. Right between Heroes' Square and Vajdahunyad Castle, and near the Budapest Zoo it's also popular with tourists and those coming from further afield to see some of Budapest's top sights. We tried the Sacher torte, which is elegantly served on a Zsolnay plate. The Sacher is one of the best we've tried and it's drenched in a dark chocolate coating and served with a vanilla flavoured house-made apricot jam. No matter what you must try the Liget coffee too.

Before you can concentrate properly on the cakes it's worth walking around and taking a look at the stunning interior. It is our great favourite because of the balanced and harmonious mixture of past and present that New York represents. The hospitality and the atmosphere carry us back to a nicer era, while the kitchen and the artistry of the confectionery represent a new wave line.

It is worth trying the New York cake selection. We couldn't decide if the chocolate cake, the Opera slice or the crispy peanut cake was the tastiest, but we are sure that New York Café is one of the best of the classic confectioneries.

The Horváth family’s beloved confectionery offers an alternative for those who would like to nibble on traditional or modern cakes a bit further away from the city centre. In Újpest we can find the cheerful spot of colour that is the traditional Horváth and the first store of Sugar!, which also belongs to the same family. While Horváth is known for its decorative wedding and birthday cakes, we tasted a pistachio slice and a tiered raspberry “omelette”. In this way we tasted a classic and a new wave cake at the same time. This was luscious cream meets professional pastry.

The city’s first modern style coffee house was handed over to the public in 1937, and is located in Újlipótváros’ Pozsonyi Street. In 2006, it reopened in its current form with a mix of 30s atmosphere and the 21st century’s technology and culinary developments.

Since then, Dunapark has become a popular meeting point for the locals of "Újlipóca" especially in good weather, when you can sit on the sunny terrace. Their bakery products and pastries are famous, and it's hard to pick just one. We tasted their cheesecake on a drizzly spring afternoon and it brightened our day.