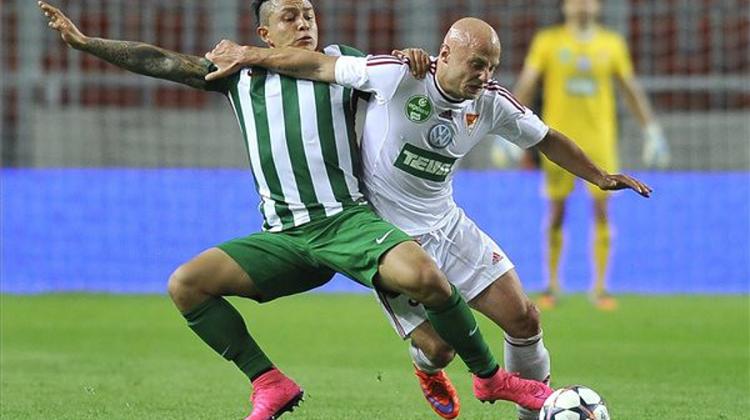 According to MLSZ.hu, a clinical Ferencváros scored three goals without reply to defeat Debrecen this weekend and surge seven points clear of Honvéd, who hammered Békéscsaba 4-1, and Haladás, who drew 0-0 with an as-yet unbeaten Újpest, in NBI’s second and third positions. Elsewhere, Diosgyőr secured a welcome point at Paks, Puskás Akadémia beat Vasas by a goal to nil and MTK inflicted yet more woe upon managerless Videoton.

Red-hot striker Dániel Böde took just 12 minutes to score his seventh goal of the season and give visitors Ferencváros an early lead in the Nagyerdei Stadion when he calmly passed the ball low into the left corner of the net.

Soon after, Debrecen’s József Varga headed his team’s best chance of the half wide of the post but in the second period the home team became more dominant, albeit they still couldn’t fashion an equaliser.

Fradi still looked dangerous on the counter and so it proved in the 66th minute when Stanislav Sesták finished a swift attack by shooting into the left side of Debrecen’s goal. Four minutes later, summer signing from Haladás András Radó scored his first goal for the club having come on as a substitute, a strike which confirmed the three points and a sixth win out of six for Ferencváros this season who now stand alone on 18 points, a full seven clear of the chasing pack.

The MLSZ.hu said, Budapesti Honvéd now head this group of teams behind Fradi after three second-half goals led to them posting an impressive 4-1 away win at Békéscsaba. Marco Rossi’s team dominated the opening exchanges but it took until the 31st minute for them to take the lead when Djordje Kamber headed in Dániel Prosser’s cross following a short, right-wing corner.

To their credit, the home team fought back and equalised in the 54th minute through Ezequiel Calvante when he slotted the ball past the goalkeeper following Bratislav Punosevac’s pass to the left-winger, but parity only lasted until Soulemanye Youla diverted a Prosser corner into the far right side of the goal four minutes later.

A late own goal from Tibor Koszó and an added-time strike from Kamber condemned Békéscsaba to another home loss, their third out of three this season, but sealed Honvéd’s ascent into second spot in the table on eleven points. On the same points tally in third place are Szombathelyi Haladás who secured a goalless draw away at Újpest in a game which featured competent goalkeeping from the home team’s Szabolcs Balajcza and the guests’ Gábor Király and ultimately sealed Újpest’s unbeaten NBI record this season, having won two and drawn four of their six matches to date.

Újpest lie in fifth spot, one behind Budapest city rivals MTK who needed a late József Kanta goal to dispose of an ailing Videoton who now lie second from bottom in the table and for whom the installation of a new head coach evidently can’t come quick enough.

Just above Vidi in the table are Diosgyőr who gained a point away at Paksi FC, a goalless first period being followed by two goals in five early second-half minutes, firstly in the 47th minute from Paks’ János Hahn whose 17-metre strike from Zoltán Lipták’s half-clearance flew into the net, and then in the 51st when Diosgyőr’s Márk Nikházi slotted in the equaliser from the penalty spot after Dávid Barczi had been penalised.

The away team goalkeeper Ivan Rados’ late saves ensured the match finished on equal terms. Download (19)Diosgyőr’s next target will be to leapfrog Vasas in ninth place after they fell to a late László Pekár goal away at the Puskás Academy. In a game of few chances, Pekár fired a bouncing ball into the net after a neat right-wing move in the 86th minute to earn his team the points and leave them comfortably placed in 8th place after six matches.

According to MLSZ.hu, next weekend sees Robert Jarni’s team travel 40km to Budapest to face Honvéd while, elsewhere, Békéscsaba host Haladás, Vasas entertain MTK who are also using the Illovszky Stadion as their base this season, Újpest head to Miskolc to face Diosgyőr, leaders Ferencváros look to maintain their 100% record at home to Paks and Debrecen travel to Székesfehérvár looking to continue Videoton’s poor start to the season.