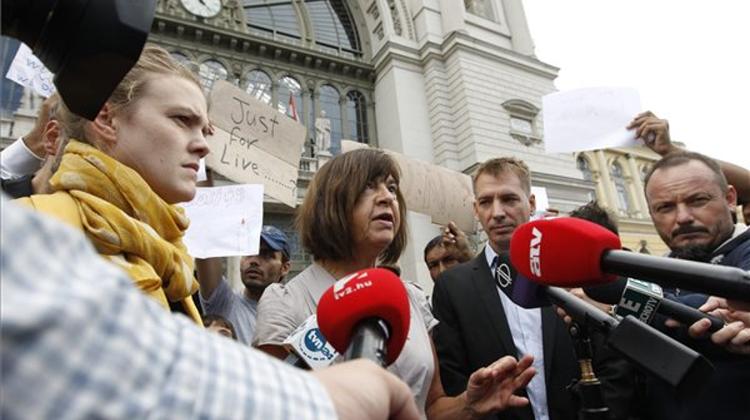 By Lydia Gall: “Why are they lying to us? Why did police tell me that the train will go to Germany when it will really go to [a] camp?” asked Mohammed, 34, from Syria, when I told him that the train he was about to board this morning was not heading to Austria and Germany but to a processing center outside Budapest.

When Budapest’s Keleti train station opened after having being closed to asylum seekers and migrants for two days, people stormed the platform thinking they could finally leave for Germany. What many didn’t know was that the train was heading instead to Bicske, a reception center. Some people I spoke to said police on the platform told them the train was headed to Germany – deliberately tricking people. Other police officers said a “camp.”

When the train arrived in Bicske, according to several media reports, one couple among the first to get off, once they understood that they were about to be taken to camp, laid down on train tracks, clutching their infant child, screaming and shouting. Others then refused to get off the train. International media was pushed away from the scene. Why doesn’t Hungary want the world to see what happens to these people?

I have spent the last week at Keleti station witnessing the heartbreaking humanitarian crisis there. Thousands of people from Syria, Afghanistan, and other places – including hundreds of children – have made it to Hungary, hoping to travel further west. But they are stranded in a station that now resembles a poorly managed refugee camp. It’s dirty, riddled with garbage, with one water tap for thousands of people and a handful of toilets inside the station.

But Hungary is failing to live up to its EU and international obligations towardsthese families, worn out after arduous journeys over land and sea. The asylum system has virtually collapsed – according to the regional spokesperson at the United Nations refugee agency, UNHCR, Hungarian authorities failed to process a single asylum claim in August due to the large number of applications – and thousands of people are stuck in Budapest without adequate assistance, reliant instead on handouts from kind volunteers.

The EU rule, known as the Dublin Regulation, that Hungary uses to justify its hard line is indeed unfair for frontline member states. It also imposes hardships and anguish on asylum seekers. The rule should be fundamentally reformed and EU countries should follow Germany’s lead and offer to take responsibility for asylum seekers from Syria, as well as other countries – even if they have traveled through other EU countries.

Additionally, EU countries, particularly those which currently do not have significant numbers of asylum seekers, should pledge to relocate people from Hungary, as well as Greece and Italy. But Hungary cannot dodge its responsibilities to provide a proper asylum system, with humane and decent conditions, to those seeking a safe haven in the EU.