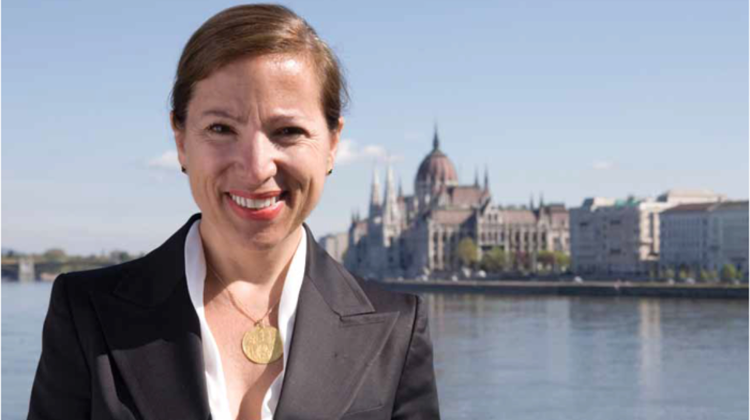 Op-ed piece written by former US ambassador to Hungary Eleni Kounalakis published by the New York Times on September 6th, 2015. <br>The scene at Budapest’s Keleti train station is returning to normal. Trains are running again, and most of the thousands of desperate people stranded there last week are on their way to other, more hospitable countries in Europe. Hungary, a country rarely in the news, is already fading from the headlines.

The challenges facing Europe from the largest refugee crisis since World War II, however, have only just begun. And the example of how and why the Hungarian government detained and harassed these people, mostly from Syria but also from Afghanistan and North Africa, should continue to be a worrisome factor.

To understand the logic behind the Hungary’s recent actions, it’s helpful to know something about its powerful leader, Prime Minister Viktor Orban.

Mr. Orban came to power five years ago in a landslide election, winning more than two-thirds of the seats in Parliament. I was the United States ambassador to Hungary at the time, and I witnessed the first years of his so-called Two-Thirds Revolution. My fellow diplomats and I watched as Mr. Orban and his Fidesz party voted in 700 new laws and adopted a new constitution.

Laws governing virtually every institution — the media, the courts, universities, local government, religious institutions — were rewritten, most at lighting speed and with little or no input from opposition parties or civil society stakeholders.

The United States was the first country to raise concerns that the radical reform process was weakening the independence of Hungary’s democratic institutions, concentrating power in the hands of fewer people and eliminating important checks and balances. In 2012, Secretary of State Hillary Rodham Clinton warned Hungary against “democratic backsliding.”

Mr. Orban’s reaction was to double down. In a speech last summer, he declared that European-style “liberal democracy” had failed. Instead, Hungary would pursue “illiberal democracy,” he said, citing Russia and Turkey as role models. With this speech, Orban dropped all pretense that he valued the basic principles of Western-style democracy.

When I last visited Budapest, in June, I asked Hungary’s ambassador to Austria about the government’s proposal to put up a fence on the border with Serbia.

“It’s going to happen,” he told me with certainty. Being accustomed to the definitive way that Fidesz officials spoke about policy, I understood. If Mr. Orban had decided, it was done.

What is notable is how early Mr. Orban prepared for an influx of refugees. Three months ago, the government posted signs with messages like “If you come to Hungary, you cannot take the jobs of Hungarians!” Since the billboards were in Hungarian only, it was clear that this was a message not for immigrants, but for Hungarians. Mr. Orban was laying doing the groundwork to inoculate the Hungarian public against feeling sympathy for these supposed job-stealers.

When the crowds of desperate people at Keleti train station began to grow, many people in Hungary did come to help, bringing food, water and clothing. Thousands more gathered in front of the Parliament building demanding more humane treatment for the newcomers. But as the days unfolded, the authorities remained unmoved. The world watched, aghast, as police officers tried to trick, or forcefully move refugees into camps, some of them far out in the countryside.
Finally and with little fanfare, Hungarian buses appeared late Friday night at Keleti station to take the immigrants, now determined not to cooperate with authorities there, to Austria.

Through all the drama of the Hungarian refugee crisis, the biggest question was this: If Hungary didn’t want the refugees, why go to such lengths to detain them? Why not just let them go to Germany, which promised to accept 800,000 asylum seekers?

As an answer, Mr. Orban hid behind European Union protocols, which require member states to register asylum seekers at the country of entry. But the truth is Mr. Orban does not only want to keep these refugees out of Hungary. He wants to keep them out of Europe. If razor wire fences don’t work, perhaps intimidation and detention will.

“Let us not forget, that those arriving have been raised in another religion, and represent a radically different culture. Most of them are not Christians, but Muslims,” Mr. Orban wrote in an article published in Germany’s Frankfurter Allgemeine Zeitung. He went on: “Is it not worrying in itself that European Christianity is now barely able to keep Europe Christian? If we lose sight of this, the idea of Europe could become a minority interest in its own continent.”

If Mr. Orban’s method of dealing with Europe’s refugee crisis was limited to the way he is handling the situation in his own country, it would be worrisome enough. But far more troubling is the possibility that his political views could gain ground elsewhere in Europe.

Buoyed to power in Hungary through his nationalistic messages and policies, Mr. Orban is attempting to bring his star power to a much larger stage. And it’s not a message that reflects the fundamental values behind the European Union.

Mr. Orban argued in the Allgemeine Zeitung that “People want us Europeans to be masters of the situation, and defend our borders …”

In contrast to his muscular, aggressive tone, European Union leaders seem to be struggling to find a unified approach in dealing with the refugees, now numbering more than 250,000 so far in 2015. There has been a vacuum of leadership — not only to take action and provide aid, but simply to articulate a response. In what is clearly a state of emergency, the European Union as a body has appeared paralyzed, with outdated protocols and plans that fail to account for the enormity of the problem.

European Commission President Jean-Claude Junker is preparing to address the European Parliament this week, and lay out a plan. It is expected that its cornerstone will be a quota system to relocate asylum seekers throughout Europe. But Central European countries — including Hungary but also Poland and the Czech Republic — have already vowed to oppose this.

The question is what European leaders will do now. Can they work together, through the architecture of the European Union to devise a set of principles, and act in a cohesive and effective manner to deal with the humanitarian and political crisis gripping the continent?

Or will Mr. Orban’s xenophobic platform and his advocacy for harsher methods of dealing with refugees be allowed to fill the vacuum?

Recently, Austrian authorities found a freight truck abandoned by human traffickers along the highway from Budapest to Vienna, in which 71 refugees died of asphyxiation. When I saw the images, I couldn’t help thinking of the cattle cars used to deport 440,000 Hungarian Jews to Nazi death camps in World War II.

It was a chilling reminder of Hungary’s, and Europe’s, tumultuous pasts. Today, while the world watches, Europeans generally and Hungarians in particular have the opportunity, and the obligation, to stand up and show the compassion and humanity that exists within us all.

Eleni Kounalakis, the United States ambassador to Hungary from 2010 to 2013, is the author of “Madam Ambassador, Three Years of Diplomacy, Dinner Parties and Democracy in Budapest.”