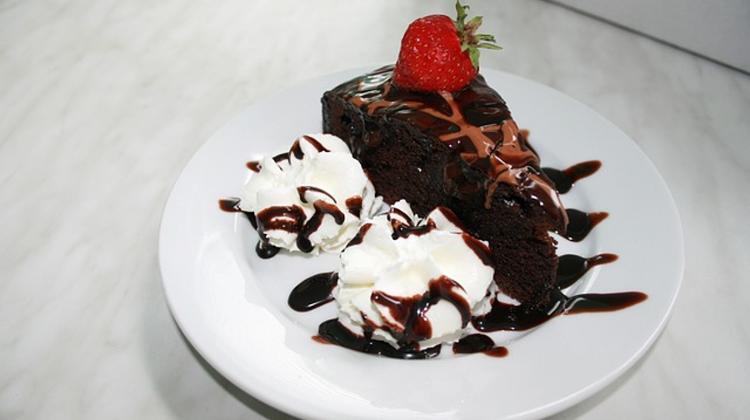 By Anne Zwack: Budapest has evolved so much over the last 25 years as to make many of its features almost unrecognizable and few coffee houses from the previous eras have lived to tell the tale. There is, of course, Gerbeaud while Ruszwurm on the Castle Hill has remained almost exactly the same as it was when my husband was taken there eighty years ago as a treat if he got a good report at school.

But very few others have survived the zeal of trendy innovators. Does anyone else remember the old Angelika coffee house next to St. Anna’s Baroque church ?

The Gellert Coffee House does however seem oblivious to the fact that time has gone by, dozing with old world elegance beneath its chandeliers, the deferential waitresses serving cappuccino and cakes in Apponyi Herend china while in the late afternoon a pianist plays “As time goes by”.

Another favourite haunt is the Istvan Cukraszda at number 17 October 6 Street which has been in the Mellis family since 1957 and is so tiny it looks in danger of being squashed by the houses on either side. The cakes and ice cream are on display downstairs while the old fashioned tea room upstairs with its crimson plush and Thonet chairs is a haven from modern times and the hurly burly of tourists outside.

When I go shopping in Culinaris in Balassi Balint street, I always go next door to the Szalay coffee house which has been in the family for four generations, the present owner being Szalay Gyorgy. With its jumble of little round tables and prints high up on the wall it has a timeless feeling. As I sit eating one of their delicious cherry retes I can reflect at my leisure on the contents of my paper bags.  Did I really need that oozing Portuguese cheese or Wasabi Coated Green Peas?

The Bambi Eszpresso is retro in a different way. Founded in 1961 it is difficult to spot what might have been added since. At the corner of Bem Ter and Frankel Leo utca with a big terrace outside it still has the fake red leather banquettes and formica topped tables of yesteryear. Cakes are not a big feature here, more kolbasz and scrambled eggs.

My particular favourite is the Frohlich Kosher Cukraszda in Dob utca at number 22 which has been in the Frohlich family since 1962. I remember old Mr. Frohlich emerging covered in flour from the bakery at the back. His son is the Chief Rabbi of Budapest and the rest of the family all run the pastry shop.

The Muvesz Cukraszda on Andrassy at number 29 (be careful there are two other Muveszes on the same street) has also resisted change. Founded in 1868, apart from a couple of flat screen TVs, it looks like a set for a Merchant Ivory film. It is easy to imagine wasp waisted ladies in preposterous hats and gentlemen in spats around the tiny marble topped tables.

Here they make proper tea in a pot and there are magnificent cakes revolving in a glass vitrine which I didn’t taste as I will have to fit into the dress I couldn’t resist at Nubu, a Hungarian designer further down the street.

But if you want to immerse yourself in nostalgia for Budapest in the seventies and eighties you should go to the downstairs bar at the Astoria Hotel with its live music, a nostalgic time warp where you might want to stipulate that you like more than one ice cube in your G and T.